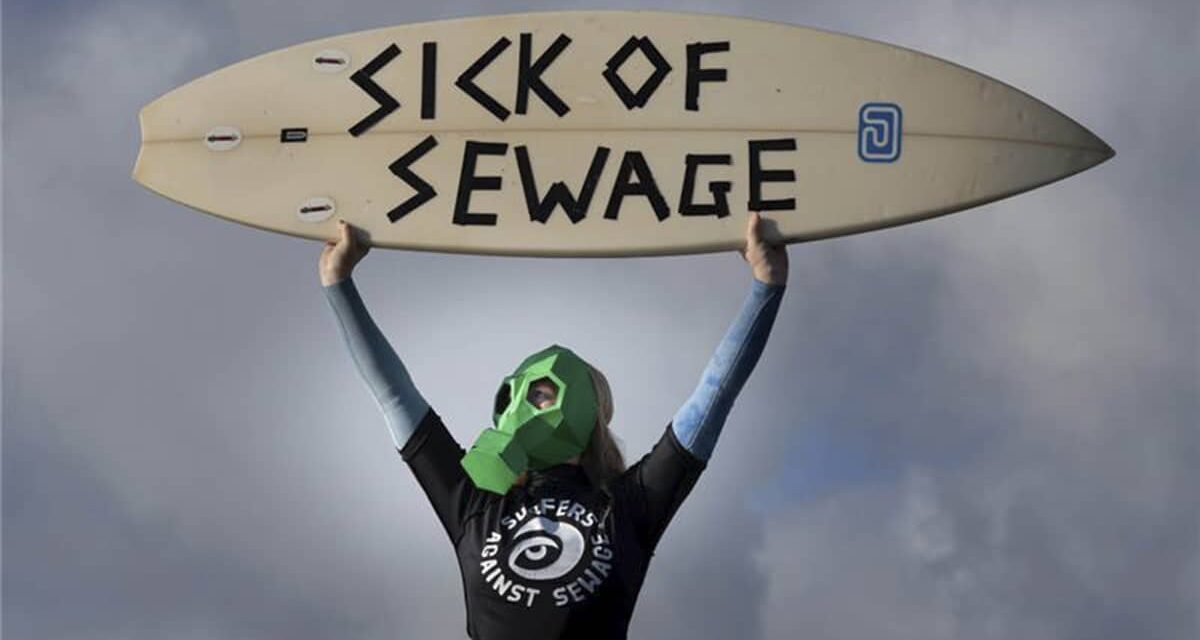 New report shows evidence of illegal ‘dry spills’ into UK rivers and seas by water companies, as public continue to suffer the grim consequences of swimming in sewage 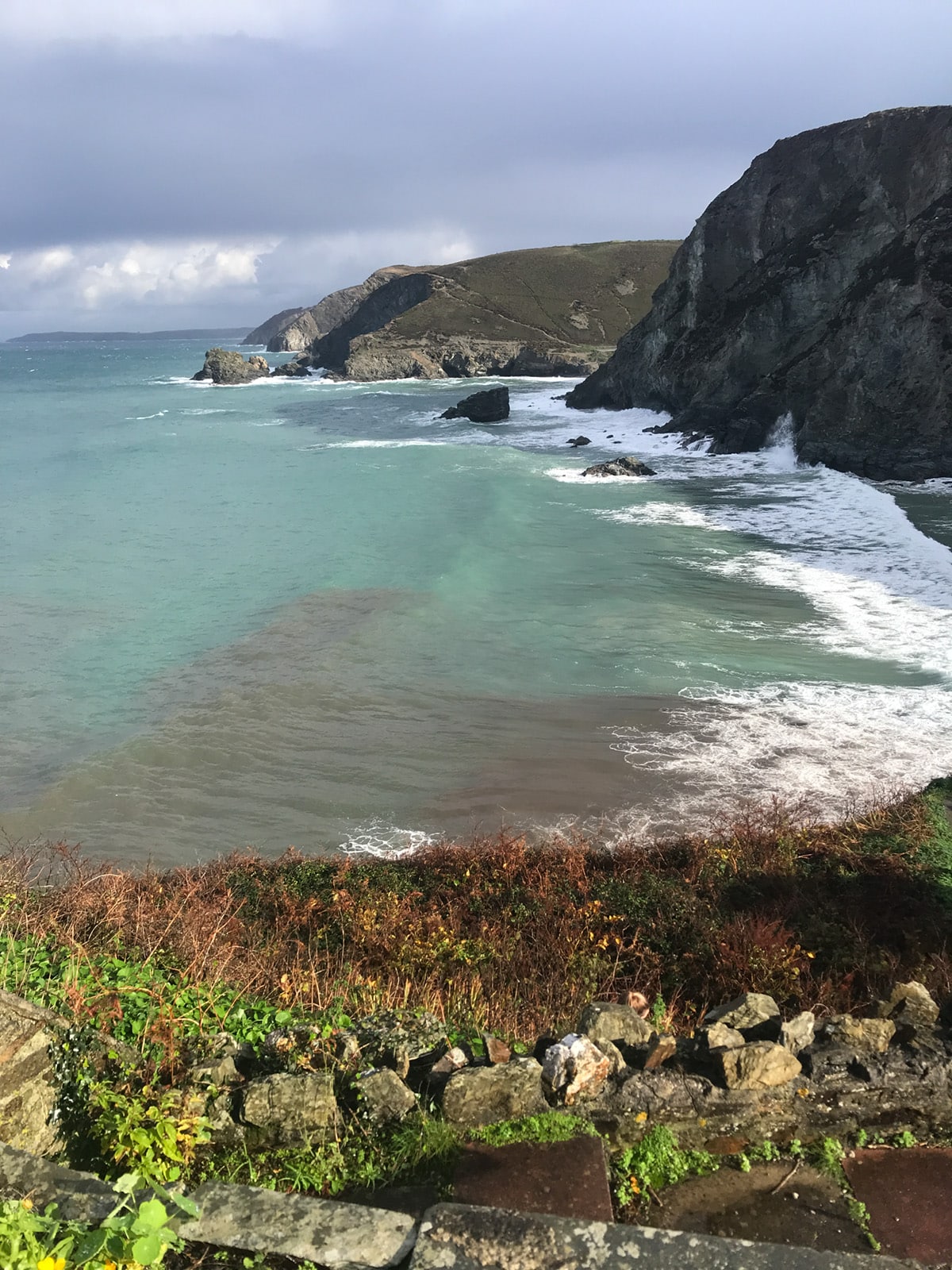 New report shows evidence of illegal ‘dry spills’ into UK rivers and seas by water companies, as public continue to suffer the grim consequences of swimming in sewage
Sewage outflows are only permitted in ‘unusually heavy rainfall’, but analysis from Surfers Against Sewage (SAS) suggests regulations were ignored by water companies.
For the first time Surfers Against Sewage’s annual water quality report analyses the frequency of ‘dry spills’ (discharges of sewage when there has been no rain).

• 146 dry spills were detected over a 12-month period, with 95 of these at locations where water quality is classified as ‘excellent’.

• Over the same period SAS issued a total of 9,216 sewage pollution alerts via its Safer Seas & Rivers Service (SSRS).

• Well over a third (39%) of sickness cases reported to SAS correlated to sewage discharge alerts.

• New Event Duration Monitoring (EDM) data for the 2022 bathing season – which will reveal the frequency and duration of sewage discharges in England this summer – is expected from the Environment Agency this week. 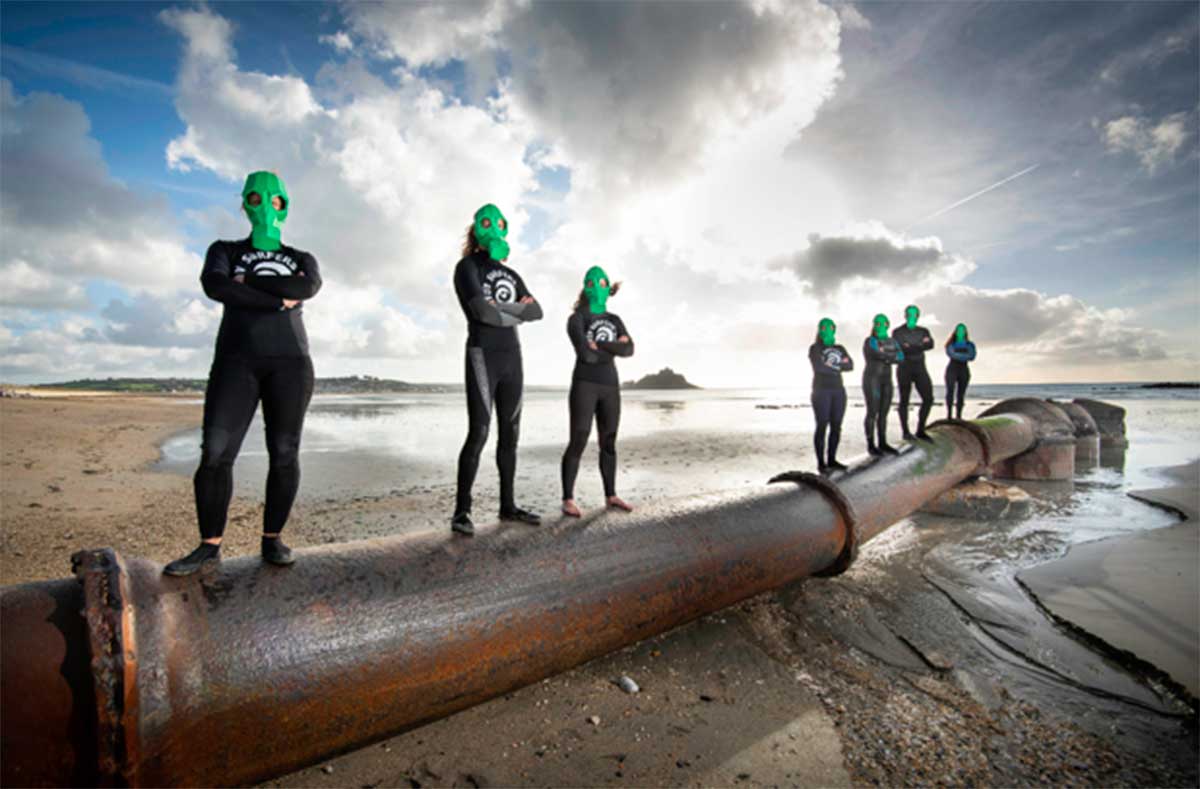 UK water companies could be guilty of illegal activity according to a new report released by campaign group Surfers Against Sewage (SAS) today. Analysis of sewage discharge alerts and meteorological data[1] shows that discharges occurred in multiple instances when there was no rain recorded – at least 146 times at a conservative estimate – despite regulations stipulating that outflows should only occur during ‘unusually heavy rainfall’. Southern Water was responsible for four times as many ‘dry spills’ as the next worst offender, South West Water.

Between October 2021 and September 2022, SAS issued 9,216 sewage pollution alerts via its Safer Seas & Rivers Service (SSRS), which covers over 450 beach and river spots across the UK, and is designed to help the public make informed decisions about where and when they swim, surf or paddle. A quarter (2,053) of these alerts were during the 2022 bathing season.

Amy Slack, Head of Campaigns and Policy at SAS, said: “Over the last year, the UK public has made clear their disgust at what’s happening to our rivers and seas, and yet water companies continue to pollute at will. It’s especially alarming to uncover evidence of potentially illegal activity by water companies in the form of ‘dry spills’, which are not permitted under current regulations. Shareholders and CEOs are unashamedly profiteering off pollution.
“Surfers Against Sewage has been campaigning on water quality for the last three decades, making it abundantly clear to water companies that their actions are detrimental to both environmental and public health. Yet water companies are still choosing to pour sewage into the ocean and rivers across the country, make us quite literally sick of sewage.
“The government is complicit in the sewage scandal, failing to enforce and strengthen regulations to protect the health of the UK’s waterways – and the health of its citizens. Politicians are simply kicking the can down the road, legitimising sewage pollution for the next 27 years through the sewage action plan published this summer.

“It’s high time the government stepped up and took real action to curb the destructive and selfish behaviour of the water companies responsible for this literal shitstorm.”

As part of its water quality report, SAS has also analysed data from 720 sickness reports submitted via the SSRS. The data revealed that over a third (39%) of sickness cases correlated to sewage discharge alerts, whilst 63% of cases that were reported to a doctor were attributed to poor water quality. 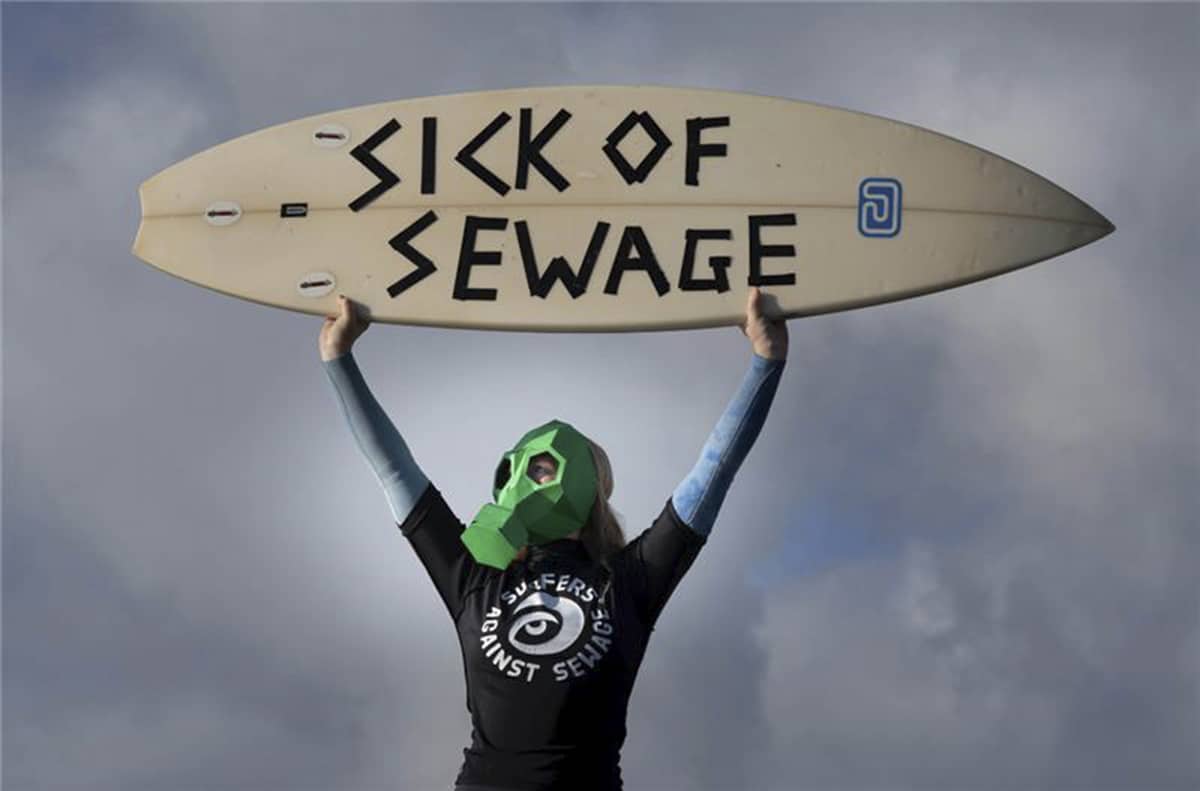 SAS’s sickness data is proof of the detrimental effect that the sewage scandal is having on our health. The most common illness reported from people who got sick after swimming in rivers or the sea was gastroenteritis, with 2 in 3 people reporting symptoms associated with the condition. Ear, nose and throat infections were common too, with respiratory, skin and urinary tract infections also reported.

Dr Anne Leonard, an environmental epidemiologist and microbiologist based at the University of Exeter, said: “We’ve known for over one hundred years that sewage contains disease-causing microorganisms, and that ingesting water contaminated with this kind of waste causes infections. These infections may be mild, self-limiting illnesses but they can also be really severe infections that require medical treatment. 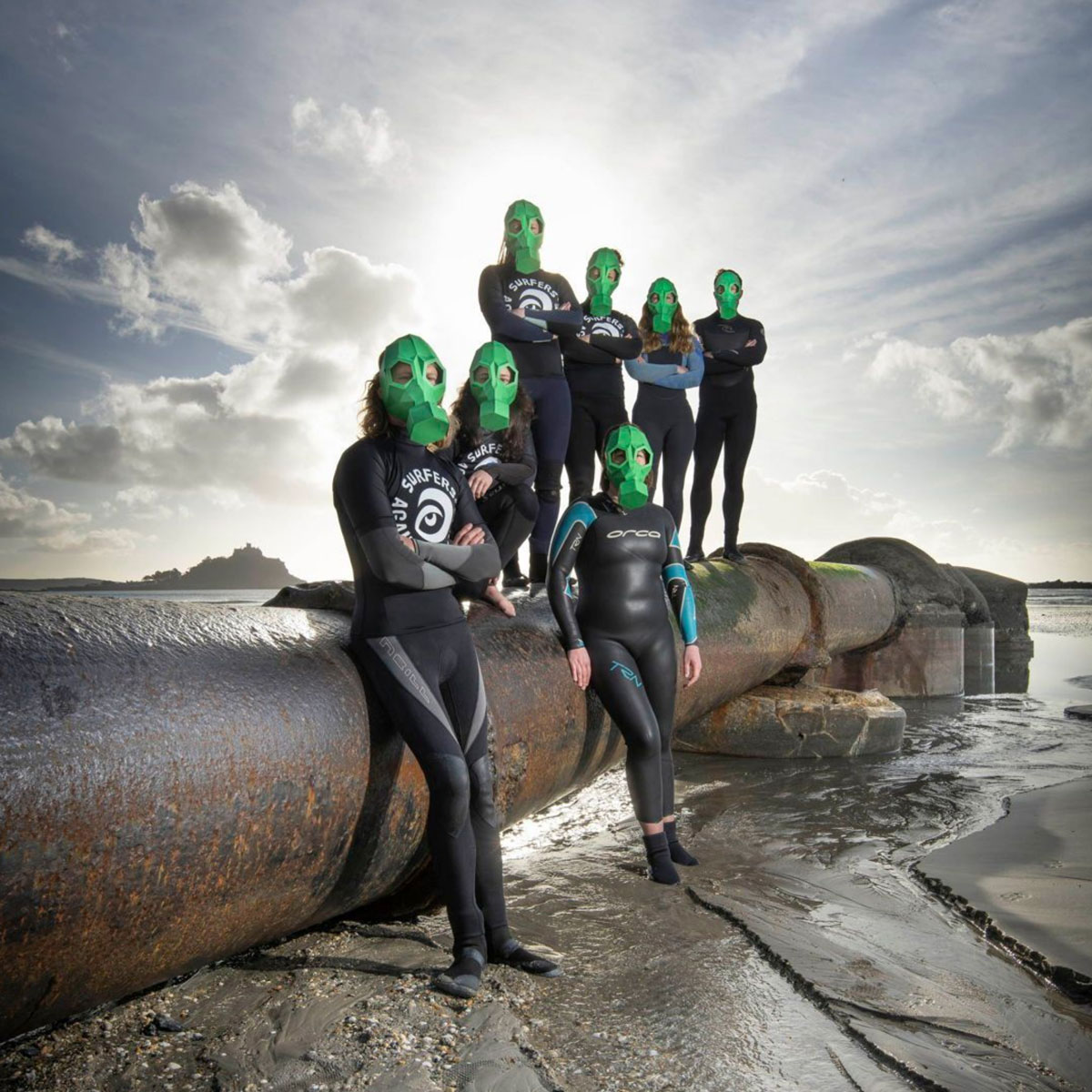 “We are particularly concerned about the presence in sewage of disease-causing bacteria that do not respond to treatment with antibiotics – so called antibiotic resistant bacteria. We are running out of antibiotics that are effective against the most resistant bacteria, so keeping sewage away from our rivers and beaches is a key public health intervention to reduce preventable infections and limit our reliance on antibiotics.”

The sewage scandal is also affecting mental health, with members of the public eschewing spending time in rivers and the sea after experiencing sickness – despite finding activities such as swimming, surfing and paddleboarding beneficial to their mental wellbeing.

Julia Walker, a social worker based in Shoreham, West Sussex, said: “I use the sea to help manage stress from my job as a social worker. In September I went for a swim in a popular spot prior to starting a new job. That evening I experienced diarrhoea and stabbing pain in my kidneys. The doctor confirmed I had a bacterial and a kidney infection. They felt that it was very unusual to have both at the same time but said that this was likely caused by swimming in contaminated water.

“I was unwell for six days, which impacted on my new role. It took me a couple of months to get back in the sea, and now I only swim with my head above water for fear of becoming ill again. It makes me very angry that the water companies are affecting how I use the water.”
With the release of its annual report, SAS is reiterating six key demands to end sewage discharge into bathing waters by 2030, which are as follows:

• An enhanced water-quality testing regime.
• The establishment of 200 designated inland bathing waters.
• World-leading water quality legislation with ambitious legally binding targets and well-funded regulators.
• To end untreated sewage discharge in all bathing waters and to reduce all untreated sewage discharges by 90%.
• Nature-based solutions to sewage pollution.
• Investment from water companies and other systemic polluters. We need water companies to invest urgently in their sewage infrastructure and end the use of sewage overflows.

Despite public outcry at the volume of sewage being released by water companies into our rivers and onto our beaches, the government has continued to drag its heels on bringing water companies into line. Reductions in regulator funding of over 50% over the last decade, combined with the stripping of red tape to allow water companies to self-report on their pollution, has left the UK’s rivers and seascapes in dire straits. Meanwhile, despite nearly every water company recording a loss for the year ending 31 March 2022, the majority still paid out dividends to shareholders totalling £965 million, whilst paying a cumulative total of £16.5 million to their CEOs.
According to data from the Environment Agency, sewage has been dumped into the ocean and rivers around the UK more than 770,000 times over the course of 2020 and 2021 – the equivalent of almost 6 million hours.