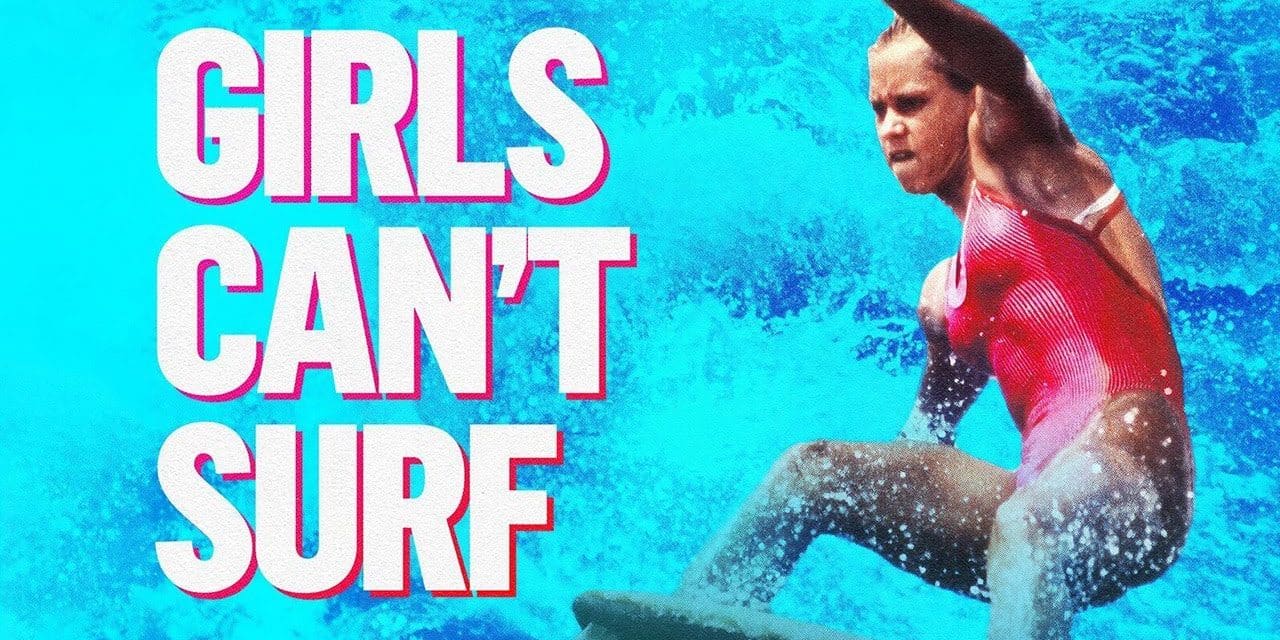 The feature documentary GIRLS CAN’T SURF is out in cinemas in the UK on August 19th. It’s an inspiring story about a group of female surfers who in the 80’s decided they’d had enough of being side-lined and treated differently to male surfers, being paid less in prize money and sponsorship and expected to compete in substandard surfing conditions. They took on the male-dominated world of surfing and changed the course of female surfing forever.

SurfGirl caught up with 80’s surfer Pauline Menczer who’s featured in the film, for an insight into her experience and to find out what she’s up to now.

Pauline, you’ve suffered from rheumatoid arthritis throughout your life and despite this you became world surfing champion in 1993. That was an incredible achievement, especially as you’re not from a surfing family?

My family have two sets of twins, one of my older brothers snapped his softboard in half. So I started surfing on half a surfboard. My brother’s weren’t really that into surfing. We all grew up at the beach though. Every day after school we would catch the bus to the beach and meet mum there. The year I won the world title my arthritis was the worst it ever was I couldn’t straighten my arms bend my wrists turn my neck and walked very crooked. I didn’t get any surf training in the lead up to the win. I also was getting as much medical and health advice/help to get me ready for the title. It was adrenaline that helped get me through to win the world title. 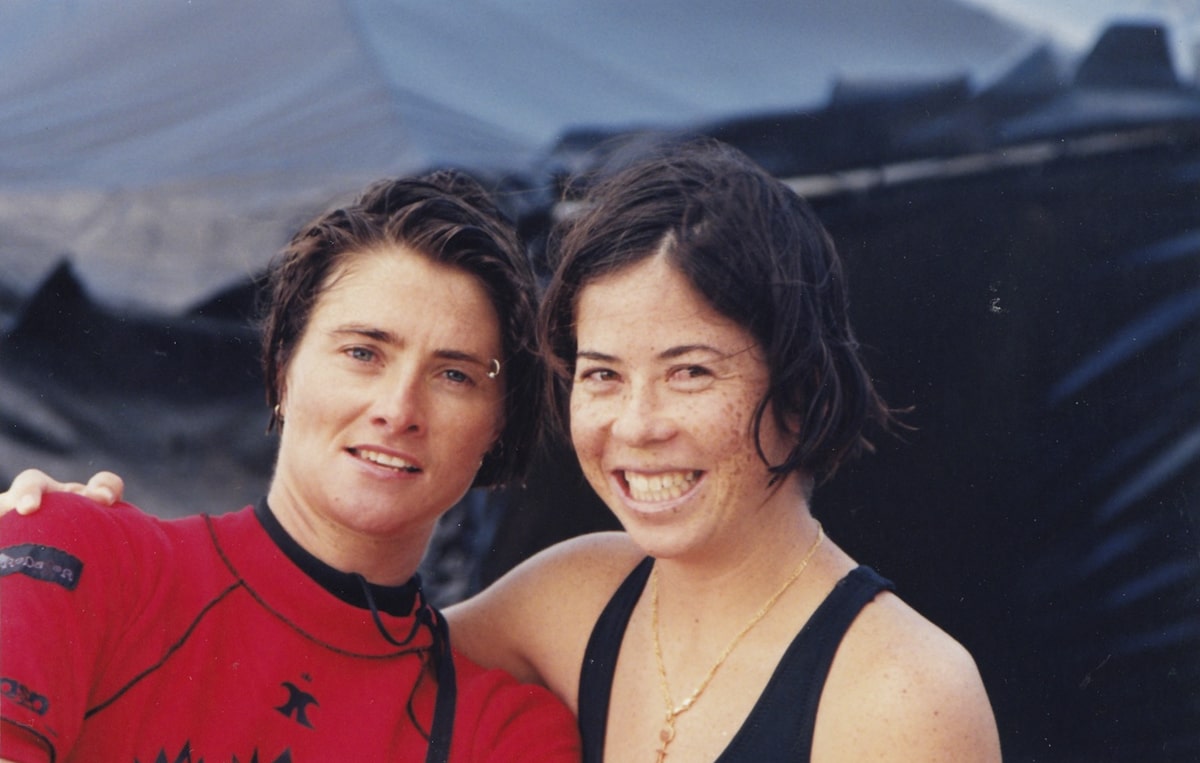 How did it feel to win the World Championship? It’s pretty unbelievable that you didn’t receive any prize money for it at the time!
To win the world title felt so amazing after months of my body being under attack of RA. It was a double win the title and my body hurdles. Just very sad there was no price for winning the title.

Where you a tight knit crew of surfers back then? And do you keep in contact with some of the others?
Yes some of us had amazing friendships and still see each other time to time. We all met up for my 50th birthday at the wave pool that was an amazing day to see so many old buddies all surfing together again. 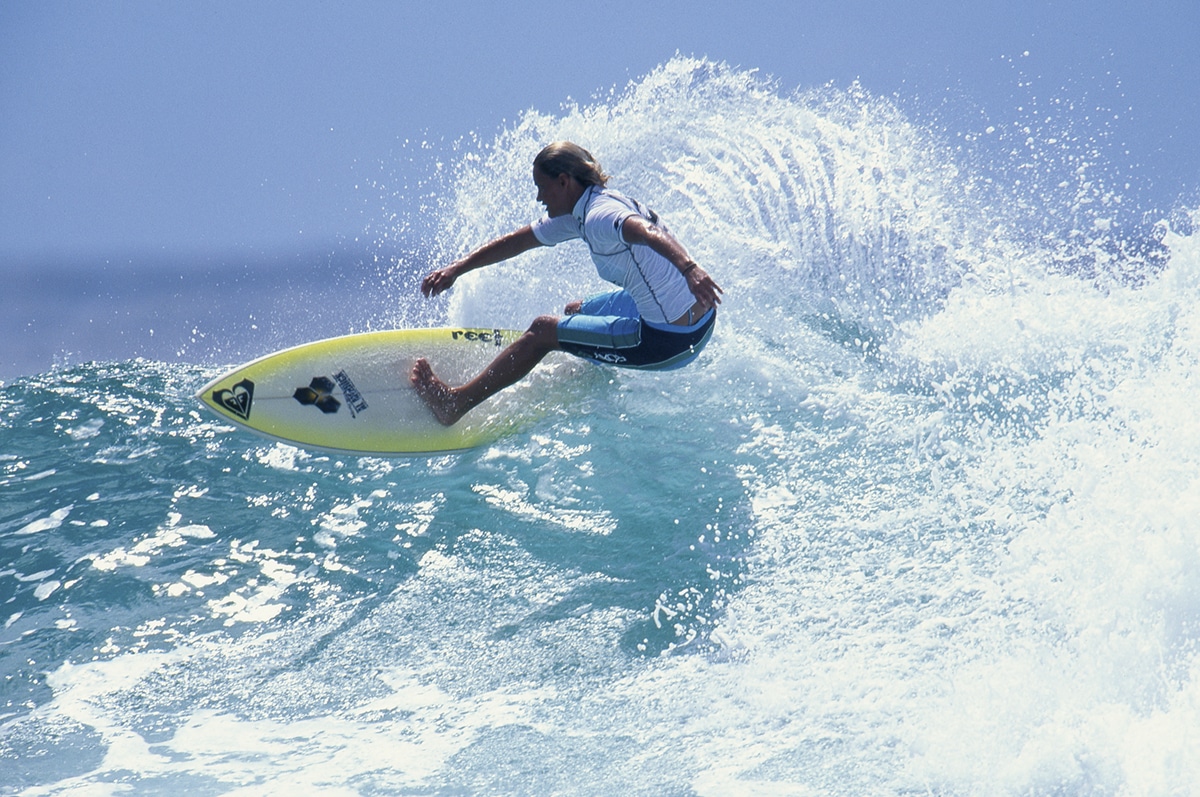 While you were on Tour your girlfriend had to travel with you as your ‘coach’ – do you feel that things are more open on the World Tour nowadays?
The world is a much better place with acceptance and inclusion. It still needs to keep heading in this direction.

How important is it that the Girls Can’t Surf film is telling your story?
History is so important and people need to know what happened to improve past mistakes. Now at 52 I’m starting to get offers and sponsors because of people seeing what i achieved. I also now tick all the boxes that in the past sponsors didn’t want me. Like being small dark hair, arthritis and being gay. Now it’s all ok. 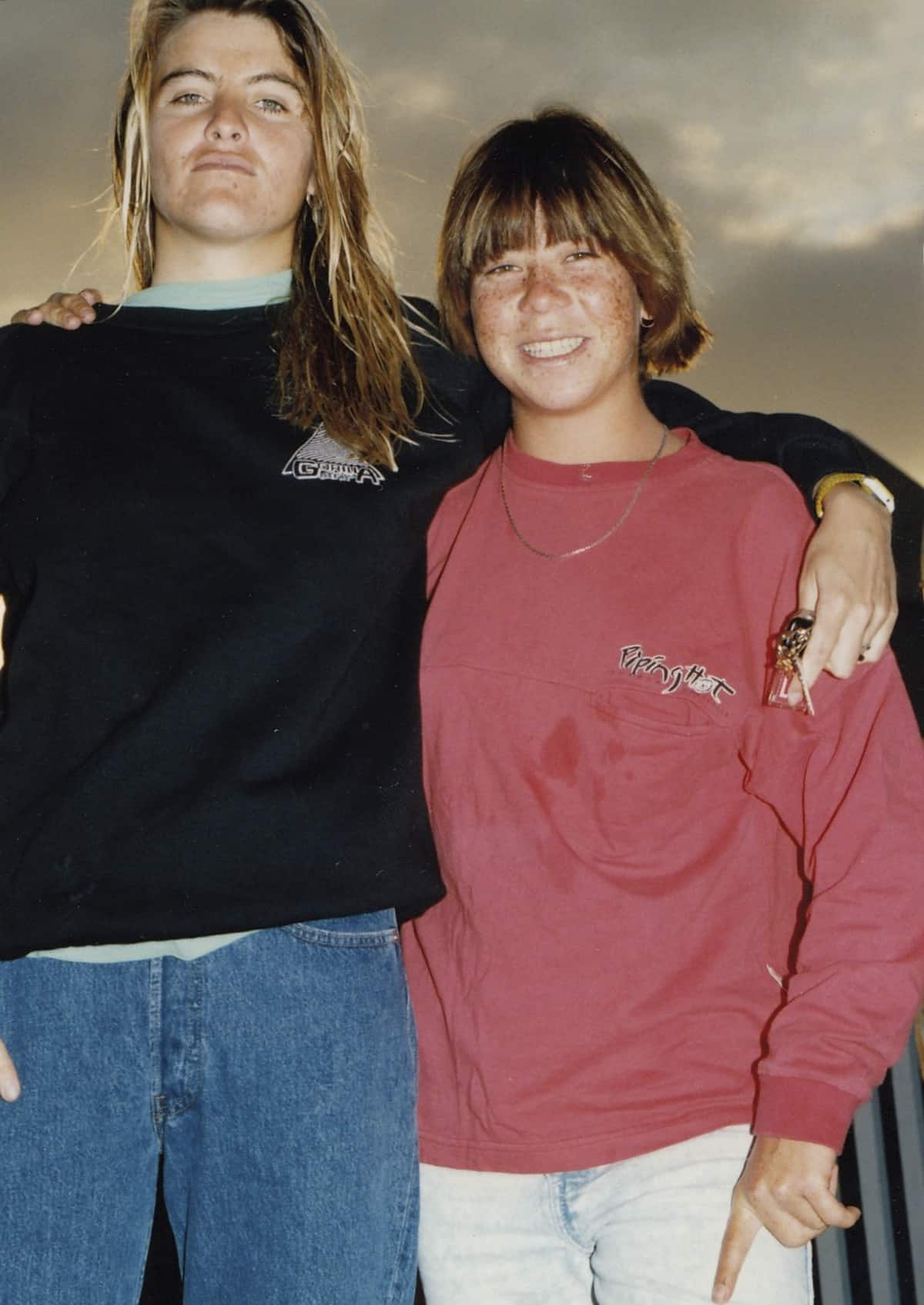 There is always a positive in every negative.

What has the response to the film been like? Were people aware of the situation back then?
The response has been incredible, so many people didn’t know. Even fellow male competitors have called me saying they had no idea it was that tough for us. They also have regrets of how they treated us. Especially now they have daughters that surf. Lol.

What are you doing these days? Are you involved with the local surf community?
Yes as a matter of fact I’m in a women’s teams event tomorrow. I do positive motivational talks. Go to kids sport events as a special guest. Loads of interviews since the documentary too. I have been volunteering helping with the clean up after the floods. I also do care for a guy that has MS. Always wanting to inspire people by telling my story. 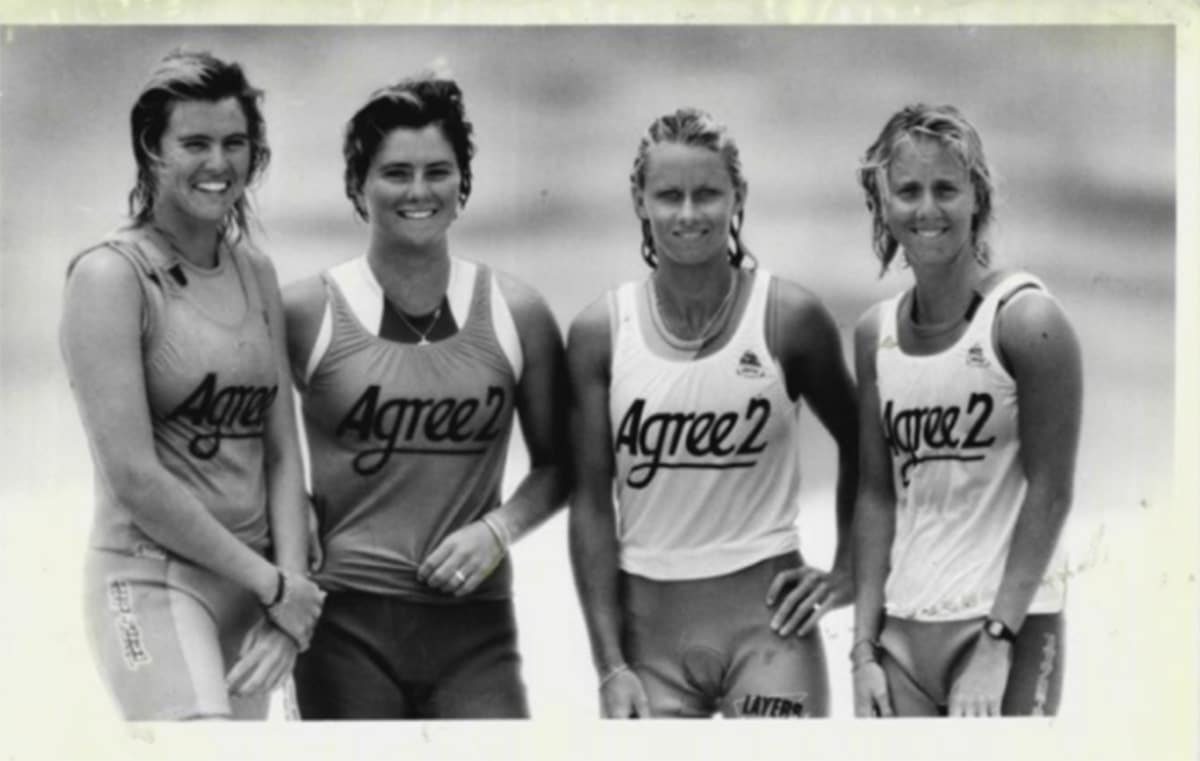 We heard there’s a new campaign ‘Pauline in Bronze’ to raise support for a statue to be erected of you in Bondi for your contribution to surfing. That’s amazing – how proud does that make you feel?
I grew up in Bondi and it feels amazing. It’s a positive project to show the next generation that you can achieve so much even with hardship or disabilities. this campaign has been led by the director and producer of Girls Can’t Surf. Funds need to be raise to pay for it and they want all the community to be a part of making this happen so have created a Go Fund Me, ‘Pauline in Bronze’ . I think a statue of me surfing as a child would be a great way to inspire the next generation of women and kids.

What motto means a lot to you?
There is always a positive in every negative. 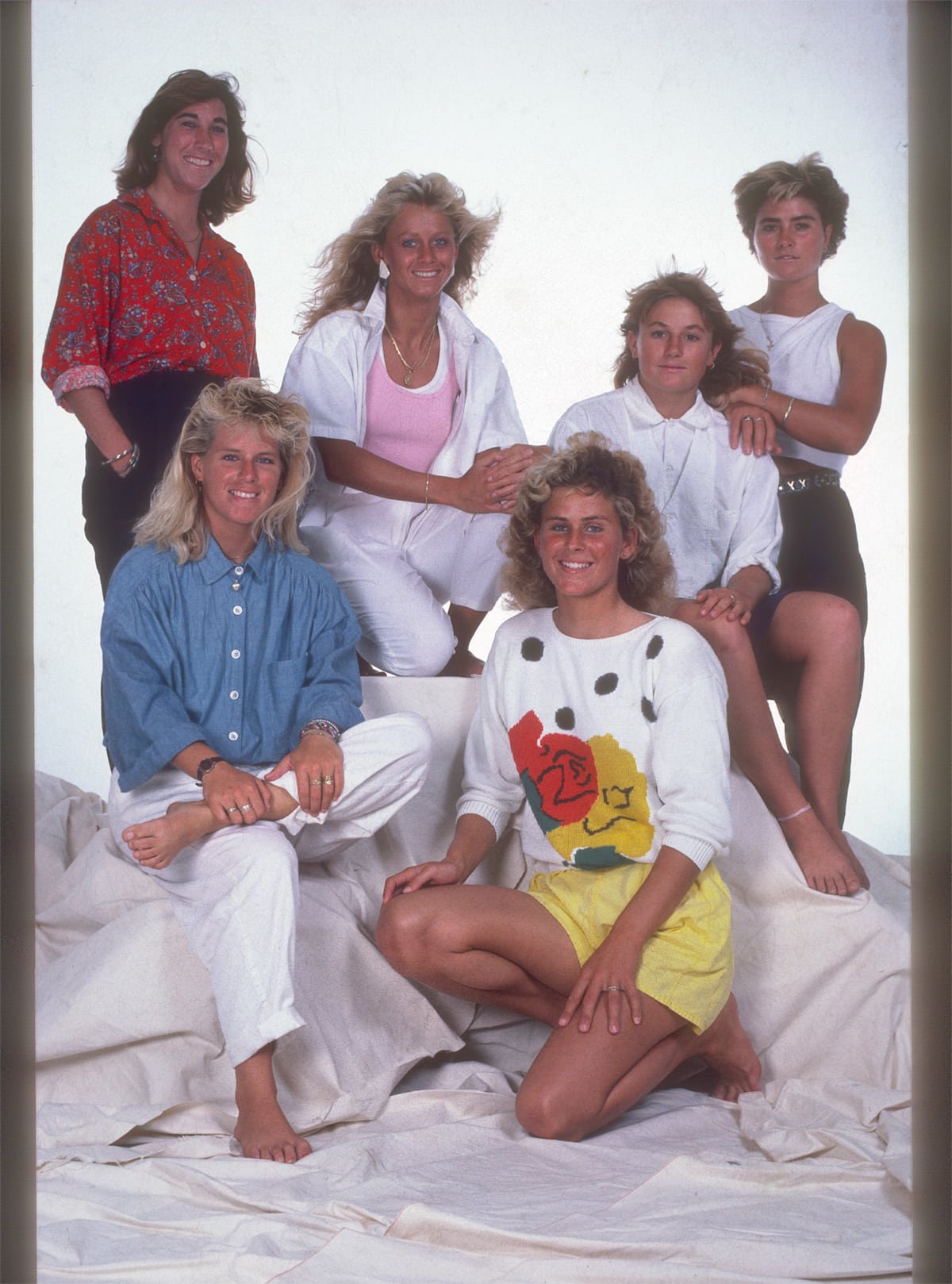 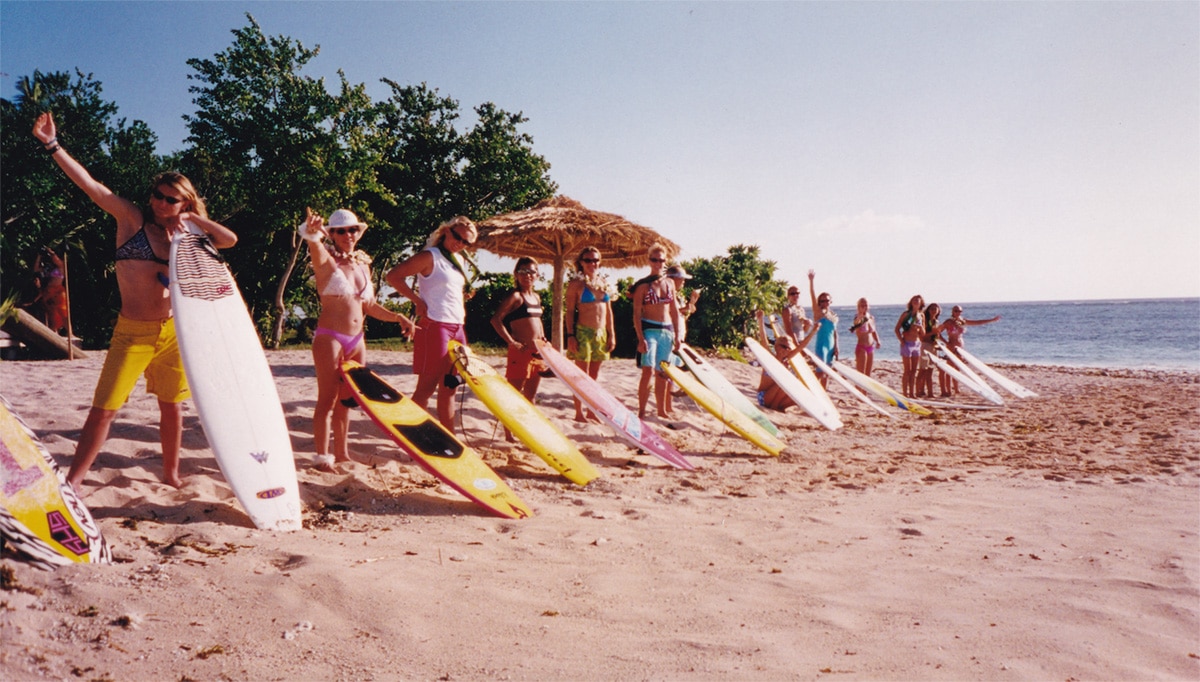 About Girls Can’t Surf UK
Studio Soho are thrilled to present GIRLS CAN’T SURF, an inspiring true story of a group of female renegade surfers who took on the male-dominated professional surfing world in a fight for equality, coming to UK cinemas August 19th.

GIRLS CAN’T SURF is a feature documentary which tells the untold story of how a band of renegade surfer girls in the 1980s fought to create their own professional sport, changing surf culture forever.
It’s the 1980s and the world of professional surfing is a circus of fluoro colours, peroxide hair and radical male egos. GIRLS CAN’T SURF follows the journey of a band of female surfers who took on the male-dominated professional surfing world to achieve equality and change the sport forever. Featuring surfing greats Jodie Cooper, Frieda Zamba, Pauline Menczer, Lisa Andersen, Pam Burridge, Wendy Botha, Layne Beachley and more, GIRLS CAN’T SURF is a wild ride of clashing personalities, sexism, adventure and heartbreak, with each woman fighting against the odds to make their dreams of competing professionally – and on equal terms ­­- a reality.