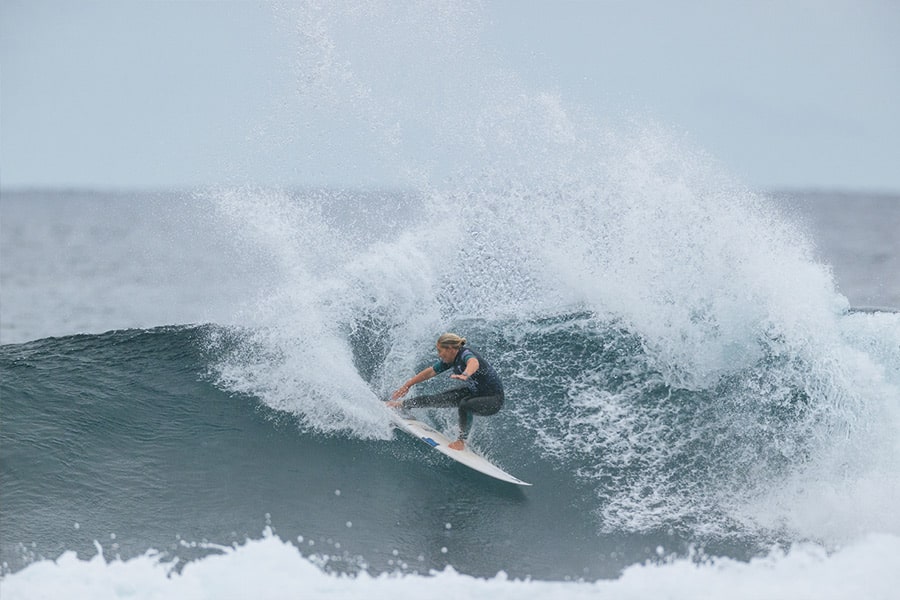 The Margaret River Pro is fifth and final stop before the Mid-season Cut on the World Surf League (WSL) 2022 Championship Tour (CT). After this competition, the Mid-season Cut reduces the CT competitors to the Top 22 men and Top 10 women for the backhalf of the season, forcing those who do not make the cut to requalify for the CT via the Challenger Series.

The Mid-season Cut was in full effect with the first elimination heats of the competition today. Four-to-six foot surf for the women’s and men’s Elimination Rounds, and women’s Round of 16 and Quarterfinals tested the world’s best alongside the new pressures introduced with the Cut. Four more surfers made the Cut and will continue their hunt for the 2022 World Title, while four rookies had their dreams shattered and will now set their sights on the Challenger Series for the opportunity to make it back to the CT for the 2023 season. 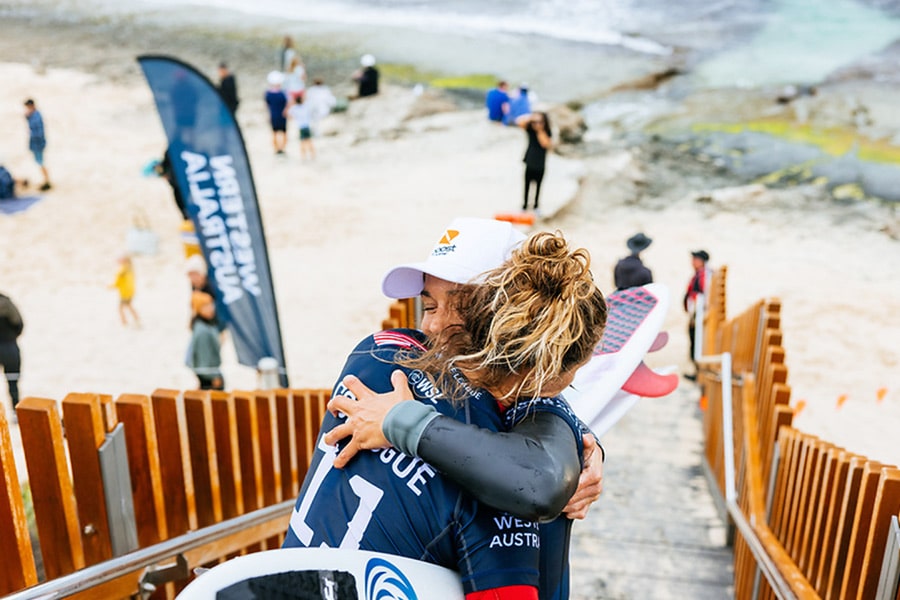 Sally Fitzgibbons is consoled by good friend Courtney Conlogue as she lost her spot on the World Championship Tour.

Australia’s Sally Fitzgibbons (AUS) has been competing on the WSL Championship Tour since her rookie year in 2009. The 31-year-old put everything on the line but fell short in the Round of 16 against Johanne Defay (FRA) and was eliminated from the competition. Fitzgibbons’ elimination puts her outside of contention on the rankings to make it through the Mid-season Cut. She will now need to compete on the upcoming Challenger Series to qualify for the 2023 Championship Tour, which also has implications for the 2024 Olympic qualification. The Quiksilver Pro G-Land will be the first CT event Fitzgibbons misses in her 14-year career.
“I felt I had the run of momentum at the start of the heat,” Fitzgibbons said. “It was really inconsistent and I didn’t think Johanne would get another chance but she did and she dropped that eight – that’s just surfing I guess, It always keeps you guessing. I’ve had a good time here in Margs, but it’s time to shift the focus and see where it takes me. Bring it on.”
Sally Fitzgibbons 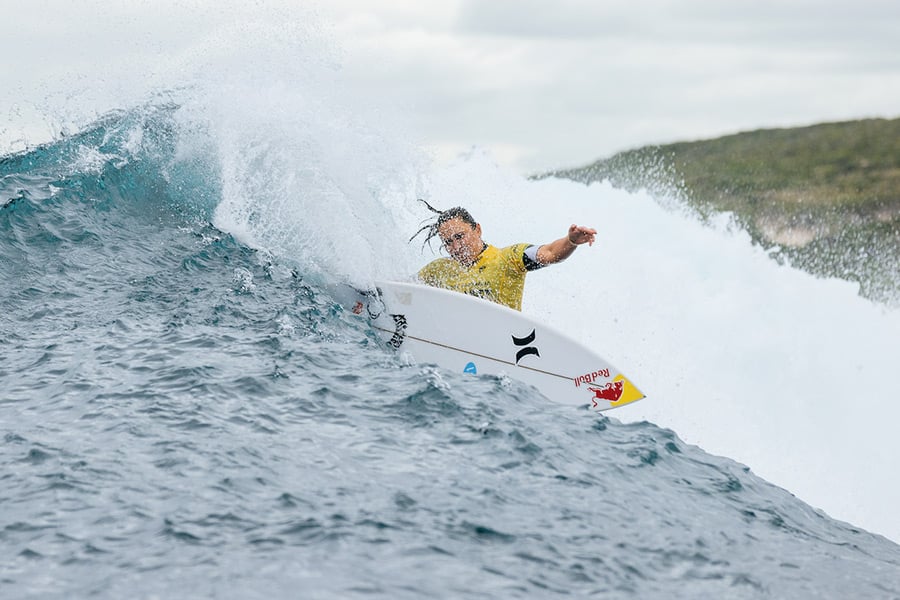 2022 CT rookies Bettylou Sakura Johnson (HAW), Luana Silva (HAW), India Robinson (AUS), and Molly Picklum (AUS) are officially off the 2022 CT after failing to make the cut. The four rookies gave it their best shots throughout these first five CT events, but Margaret River will be their last stop. They will all now head to the Challenger Series, starting at the Boost Mobile Gold Coast Pro presented by Rip Curl, which commences next Saturday, May 4. 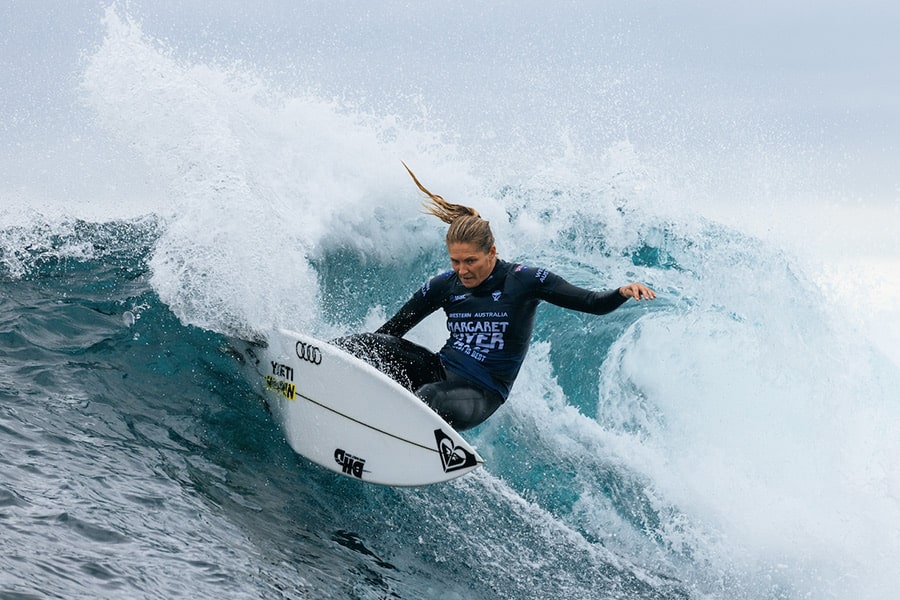 West Australia’s Bronte Macaulay has had an incredible run so far at the Margaret River Pro, upsetting the competition with massive wins over five-time WSL Champion Carissa Moore (HAW) in the Round of 16 and seven-time WSL Champion Stephanie Gilmore (AUS) in the Quarterfinals. Macaulay, the 28-year-old hailing from Gracetown, got her spot into this event as the injury replacement after missing qualification to the 2022 CT. Macaulay now has the opportunity to secure her own place past the Mid-season Cut pending her results in the Semifinals when competition resumes.

“I think Steph and I had a bit of a shocker,” Macaulay said. “It went pretty flat out there and I made a few mistakes, I was just nervous, to be honest so I’m stoked to get through. It’s awesome to be in the Semis. Steph is such an awesome person and has always been one of my favorite surfers and someone that has always looked out for me on tour. When we were paddling out I was thinking how cool it was to share a heat with her at Main Break. I’m not thinking too much about the cut, I’m just enjoying the opportunity I’ve had to be here competing.”
Bronte Macaulay
“I’m happy to make the cut, that was a really stressful situation,” Gilmore said. “I found out before the heat so I was hoping to surf with that weight off my shoulders but we never really got the opportunity. You just have to laugh at those heats. Bronte and I would have liked to battle it out with excellent scores but it just wasn’t to be. I could have defended a bit more but she got it in the end. I’m stoked for Bronte, it would be cool to see her do well here and even requalify for the backend of the CT. I love it here in Margaret River. It’s a fabulous place and feels like authentic Australia so it’s good to be back.”
Stephanie Gilmore
It was a tough day for the other top seeds at the Margaret River Pro with the eliminations of Tyler Wright (AUS) by Molly Picklum (AUS); Tatiana Weston-Webb (HAW) falling to rookie Gabriella Bryan (HAW); and Lakey Peterson (USA) couldn’t find the waves to take down CT sophomore Isabella Nichols (AUS), who eliminated current World No. 5 Johanne Defay (FRA).

After the first five events of the 2022 CT season, the new Mid-season Cut reduces the CT fields to the Top 22 men and Top 10 women, in addition to two men’s and two women’s wildcards (one season wildcard and one event wildcard). All surfers who make the cut continue on the CT in an effort to make the WSL Final 5 and compete in the Rip Curl WSL Finals, as well as automatically requalify for the 2023 CT. Those who do not make the cut will need to compete on the 2022 Challenger Series in order to qualify for the 2023 CT.

Following today’s results at the Margaret River Pro, the women’s field has confirmed eight surfers, with two spots to be determined when competition resumes.

With only two spots remaining, the next heats for Bronte Macaulay (AUS), Gabriela Bryan (HAW), Isabella Nichols (AUS), and even for the now-eliminated Malia Manuel (HAW), will critical to their campaigns to make the cut. Nine spots still remain on the men’s CT to be decided when competition resumes at the Margaret River Pro.