Amna Akhtar: A Woman of Our Times 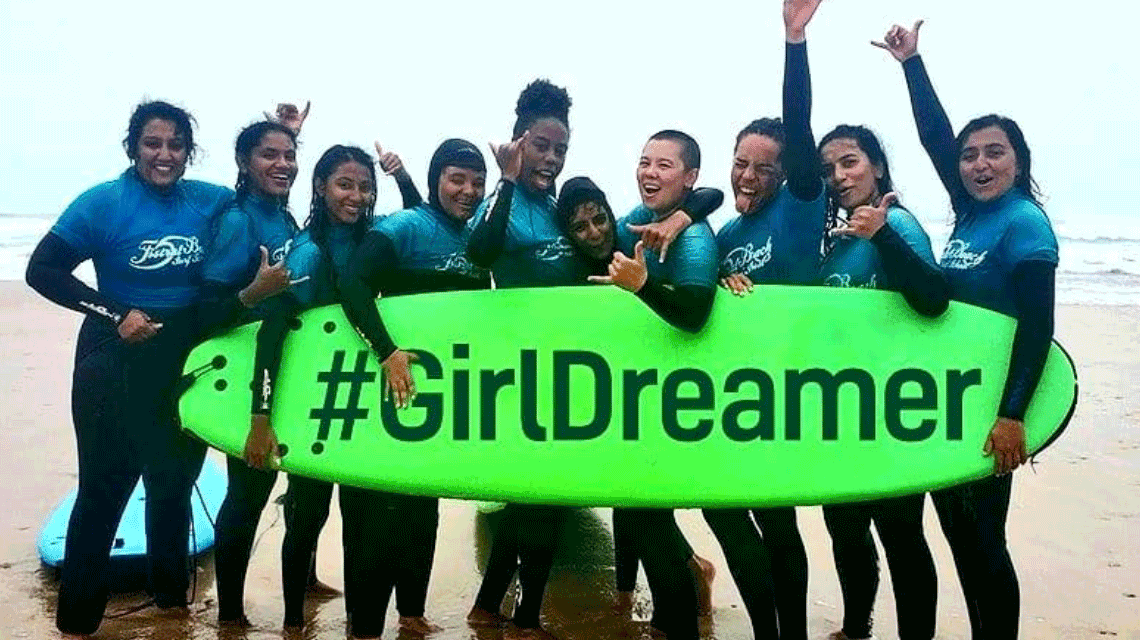 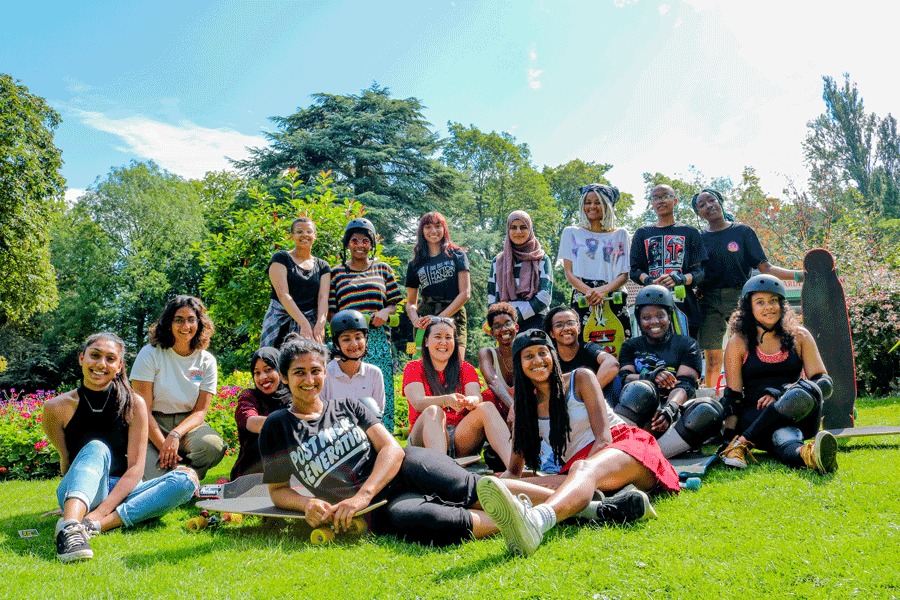 Amna Akhtar grew up in one of Birmingham’s most inner-city areas which lead her to co-founding GirlDreamer, an organisation dedicated to empowering millennial women of colour.

Growing up in inner city Birmingham, Amna journey has been a huge transformation. A woman with a vision Amna is the Co-founder of GirlDreamer, a non-profit empowerment platform for millennial women of colour. In 2017 an initiative was launched through GirlDreamer called Boarders Without Borders.

Since then, Amna has gone on to become a TEDx speaker, a Forbes 30 Under 30 recipient, set up the UK’s first women of colour longboarding and surfing initiatives and recently set up her own mentoring venture specialising in Mindset, Wellness and Emotional Intelligence. She has also had international success as a fashion designer with her work being featured in British Vogue. 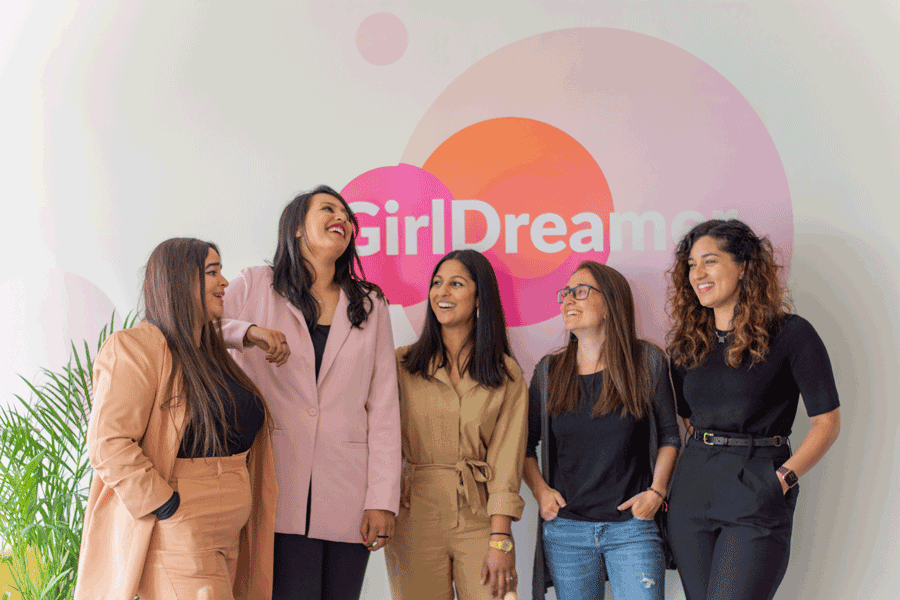 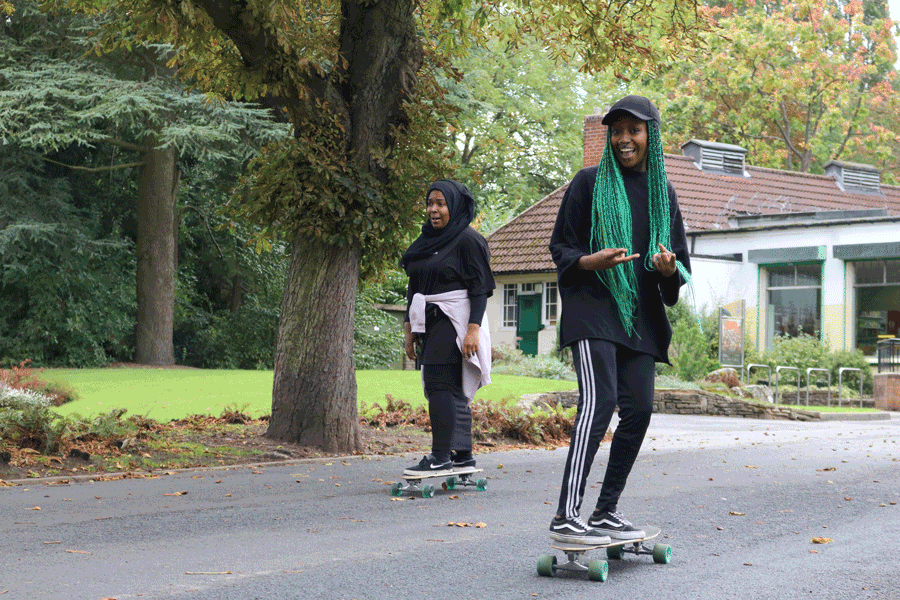 It didn’t start out this way. Amna had the vision to make things happen. To begin with Amna spent a lot of her free time watching YouTube vloggers just casually longboarding through the sunny streets of Southern California and instantly became attracted and wanted to join them. So Amna went online and ordered a longboard and began to learn how to ride it.  The moment the board arrived, she took it straight to the park and checked online if there was a longboard community in Birmingham, she could be a part of or hang out with, but there was nothing.
Amna wanted to get her community more active and social by using this unique sport, so she thought to myself, why not create one herself? She started with a group of 10 WoC in the summer holidays of 2017 and genuinely felt like she had created the community she saw in those YouTube videos in her local park in Birmingham.
Through learning more about women of colour and sports, Amna soon realised that only 12.5% of Asian women do enough exercise each week to benefit their health. This was upsetting because she knew of so many women of colour who love sports but she couldn’t work out why the stats didn’t represent this. Was something being missed out here or was it that women of colour just weren’t engaging? Amna wanted to change this. They spent the whole summer filming a longboarding programme to create representation and a legacy for other women of colour to see and feel inspired by. They  which they did, and they had already been booked up for the next intake.
A true inspiration, we asked Amna more about her community. 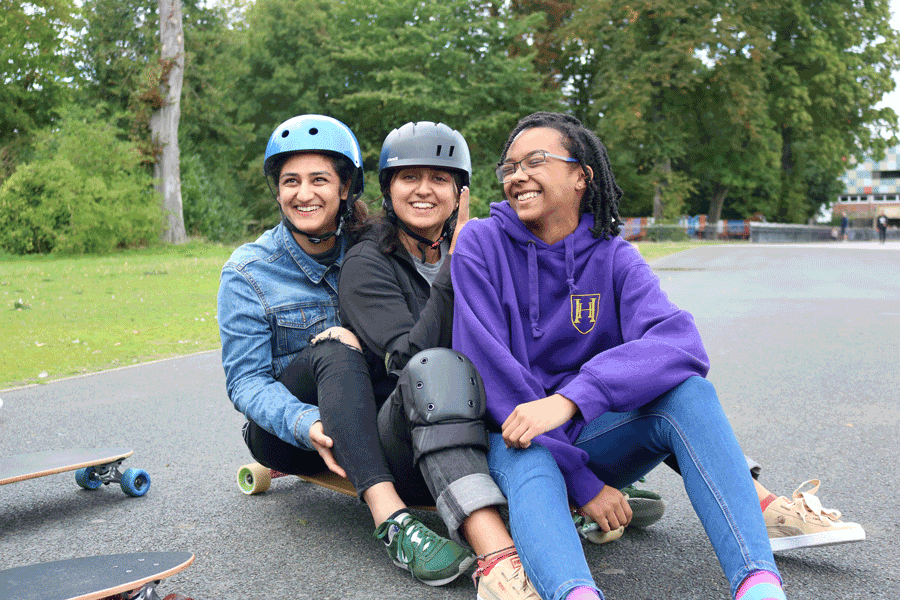 Amna, why was it so important for you to create the UK’s first WoC Surf Crew?

You can’t be what you can’t see. When I was younger, I had a few opportunities to pursue sports professionally, but my parents instantly became worried as they had never heard of or even seen a Pakistani woman before in sports. For that reason, I was deterred and not encouraged to delve further into sports. Therefore, by the time I turned 16, I hated sports because I felt like I couldn’t take it anywhere despite being so good at it. My intention with Boarders Without Borders was never to create the first WoC anything; it just so happened that no one thought to do it before. Despite it being 2020 and advancing so much globally, it’s sad to know there are still sectors and industries that lack women of colour. I feel it’s so detrimental for young girls and in fact, society as a whole to see people of colour being represented across all industries so we can be more reflective of the world we live in.
We initially started Boarders Without Borders with longboarding in Birmingham. As demand grew, so did my visions for the initiative. I wanted to introduce other board sports such as surfing and snowboarding. Therefore, this year as well as longboarding and surfing, we will add snowboarding to our community of WoC and keep building that interest and representation in the snowboarding scene too.
Women’s surfing is becoming more diverse, which is fantastic, but there is more than can be done to get more women into the sport. How do you think we can do this?
I could honestly spend a whole day talking about this, but I think one of the biggest things we can do is build representation. Quite simply, you can’t be what you can’t see. The imagery around surfing hasn’t moved on enough. It shows the same people in the same way leading and dominating the sport. For those who don’t identify with the lifestyle of what or who is always shown, it’s hard to see yourself in that way or in that place. Surfing hasn’t always seemed like the most inclusive sport, so it doesn’t allow for others to engage as not everyone is comfortable breaking the mould on their own, therefore, groups work really well. 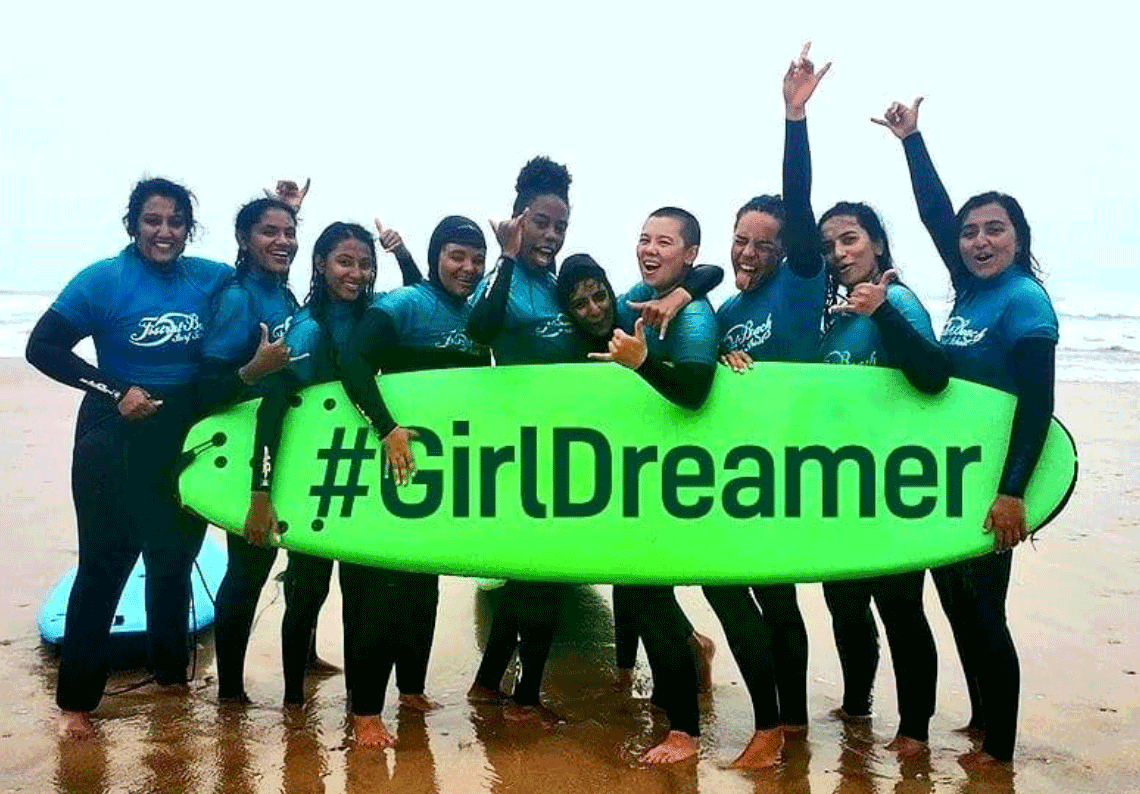 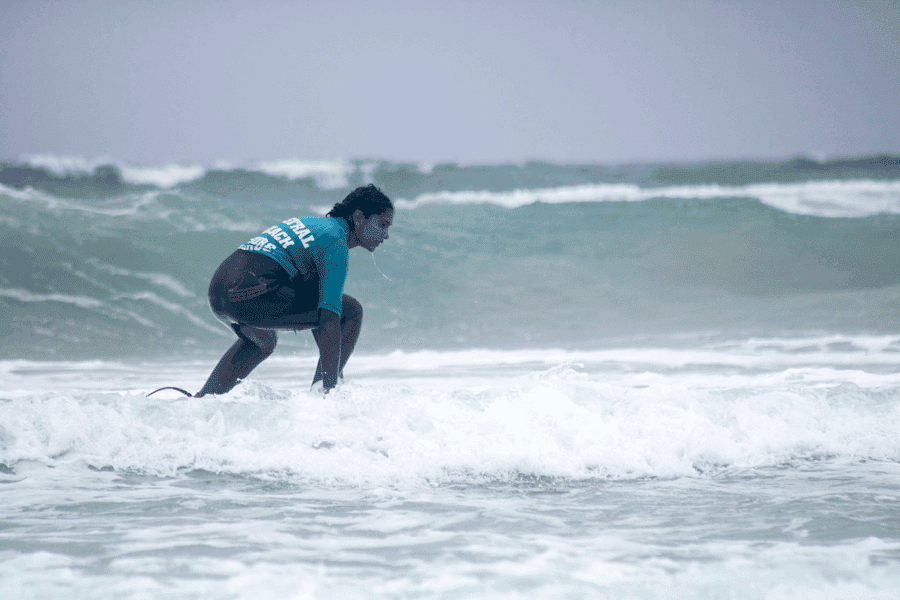 Do you think artificial wave pools will help get more women of colour into surfing?
Definitely! I think for those who have phobias or concerns of being out in open water, it’s a great place to start as there is a definite safety element where you know it’s not real, but you’re learning how to surf in a safe and controlled environment. Also, for those of us who live in bustling cities, it’s only really during holiday seasons that we think to even surf (if at all). The artificial wave pools give those in these big cities a chance to experience, learn and progress with surfing right where we are, which can even encourage us to visit the ocean more often! It’s a way for friends and communities to start somewhere, creates better accessibility and affordability, so we’re definitely here for it! A huge one is coming to Birmingham, so we’re super excited to test it out! 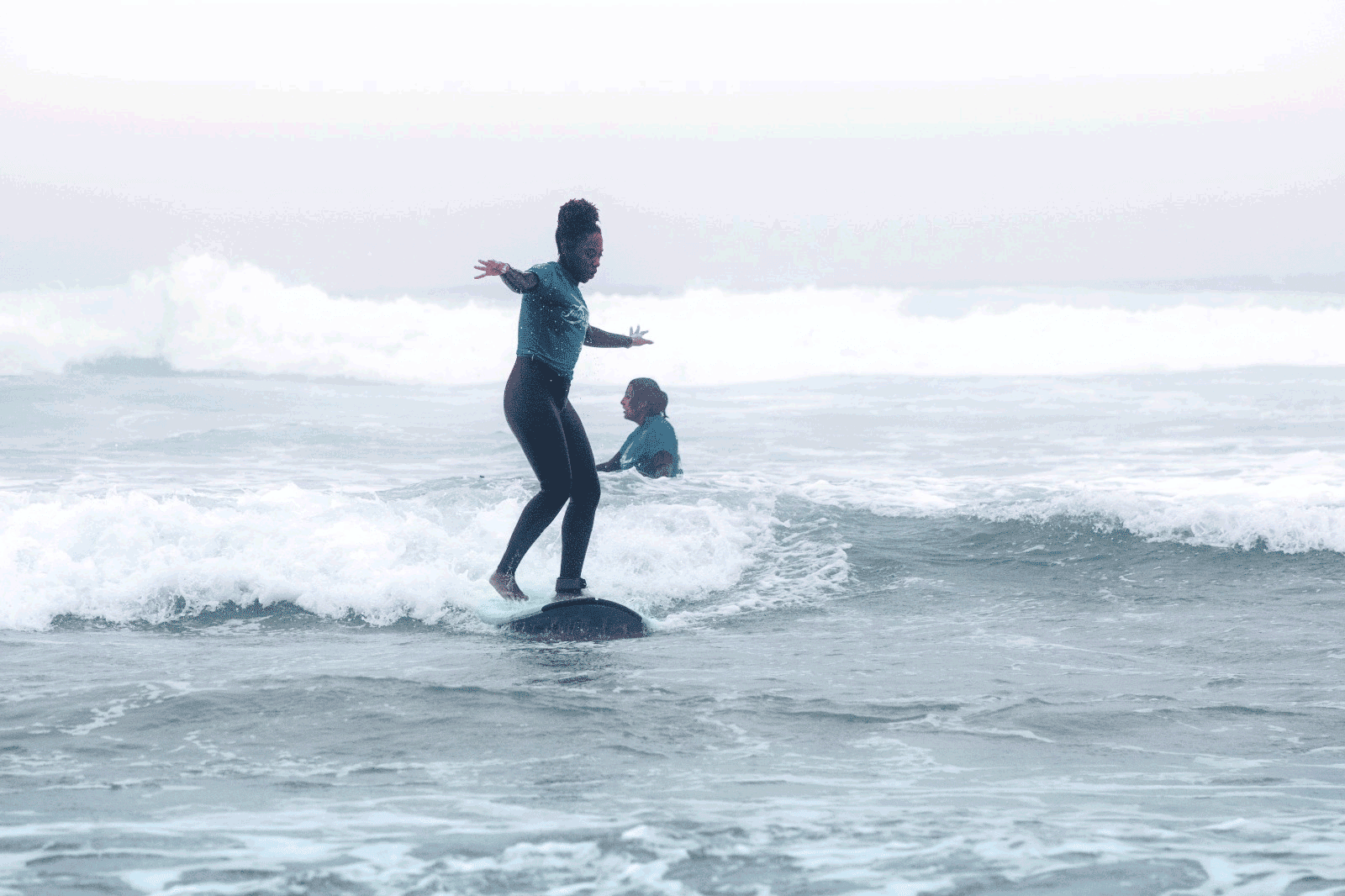