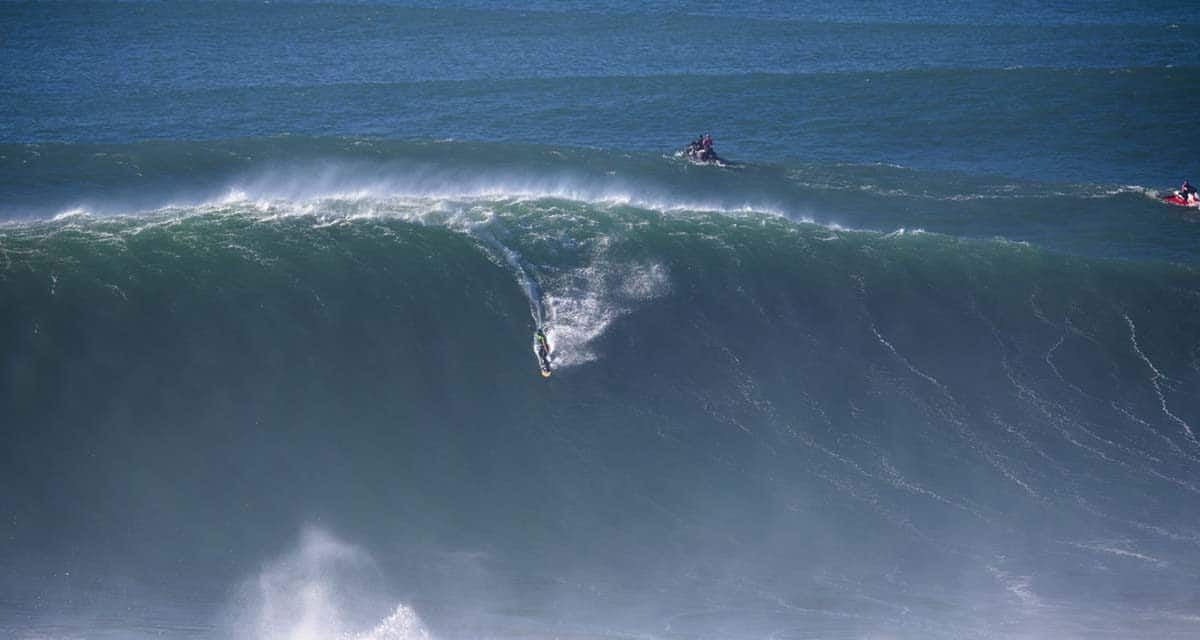 Competition got underway bright and early yesterday morning at Nazaré’s Praia do Norte for the World Surf League (WSL) TUDOR Nazaré Tow Surfing Challenge presented by Jogos Santa Casa. A beautiful sunny day and clean, offshore 40-to-50 foot bombs set the scene for what would be an epic showcase of the world’s best big wave surfers pushing the performance bar in Portugal. 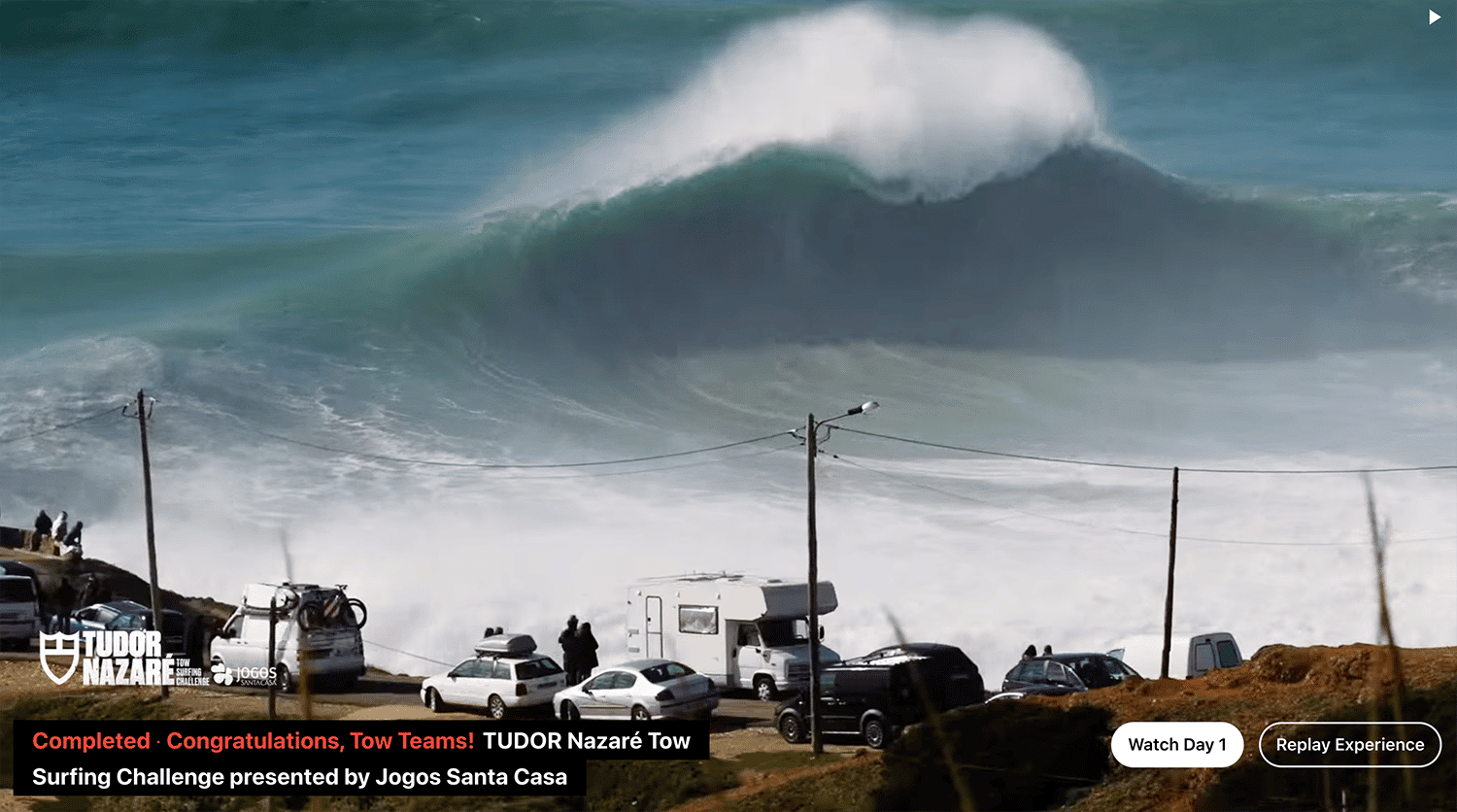 Lucas Chianca (BRA) was quick to set the scale on the very first wave of the event, fading right with a 360 spin in the middle of the wave face before racing on a high line on the left to score a nice barrel vision. His compatriot Pedro Scooby (BRA) was hands down the most impressive surfer out in the lineup in the first half of the day as he set himself up for the biggest, deepest barrels, and eventually scored a clean exit with the spit to take the top spot on the leaderboard after the first three heats, courtesy of a near-perfect 9.50 score (out of a possible 10).

“It was a crazy heat,” Scooby said. “We chose the wrong waves at the beginning and I was going crazy but Nic (Von Rupp) calmed me down and ended up putting me on a bomb. His driving put me in the perfect spot and I just did the rest, the barrel was really good.”

Kai Lenny (HAW) did his part of the job to take his duo up top the team leaderboard, scoring some nice rides on the lefts of Nazaré but not quite managing to find the hollow sections his partner Chianca was all over.
“It’s so much fun out there, two heats is just not enough,” Lenny said. “Our first heat ended chaotically but that’s why we come here, to charge. The second was better, Lucas got such a nice wave. It’s not massive but it’s always big in Nazaré.” 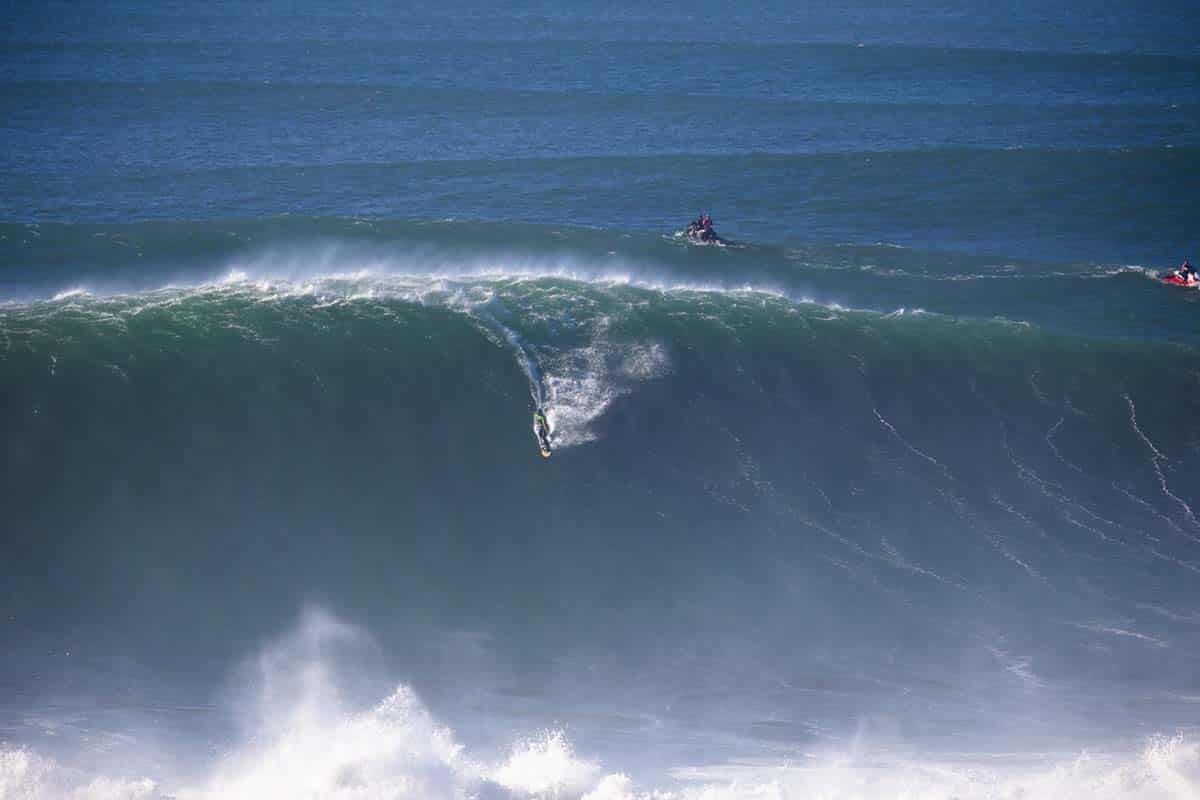 On the women’s side of the draw, Justine Dupont (FRA above) held the lead after her first two sessions with good waves but was on the wrong end of an interference call which opened the door for her opponents Maya Gabeira (BRA below) and Michelle des Bouillons (BRA) in their second go at the Portuguese lineup.
Des Bouillons stayed extremely busy in the lineup, surfing maybe the most rides out of the field but struggled to find the deep sections and was always a little away on the shoulder, hindering her scores.

“It was amazing,” Des Bouillons stated. “It’s really pretty out there but a lot harder than it looks. There’s a lot of bumps so I tried to control as much as I could and I’m happy with my performance.” 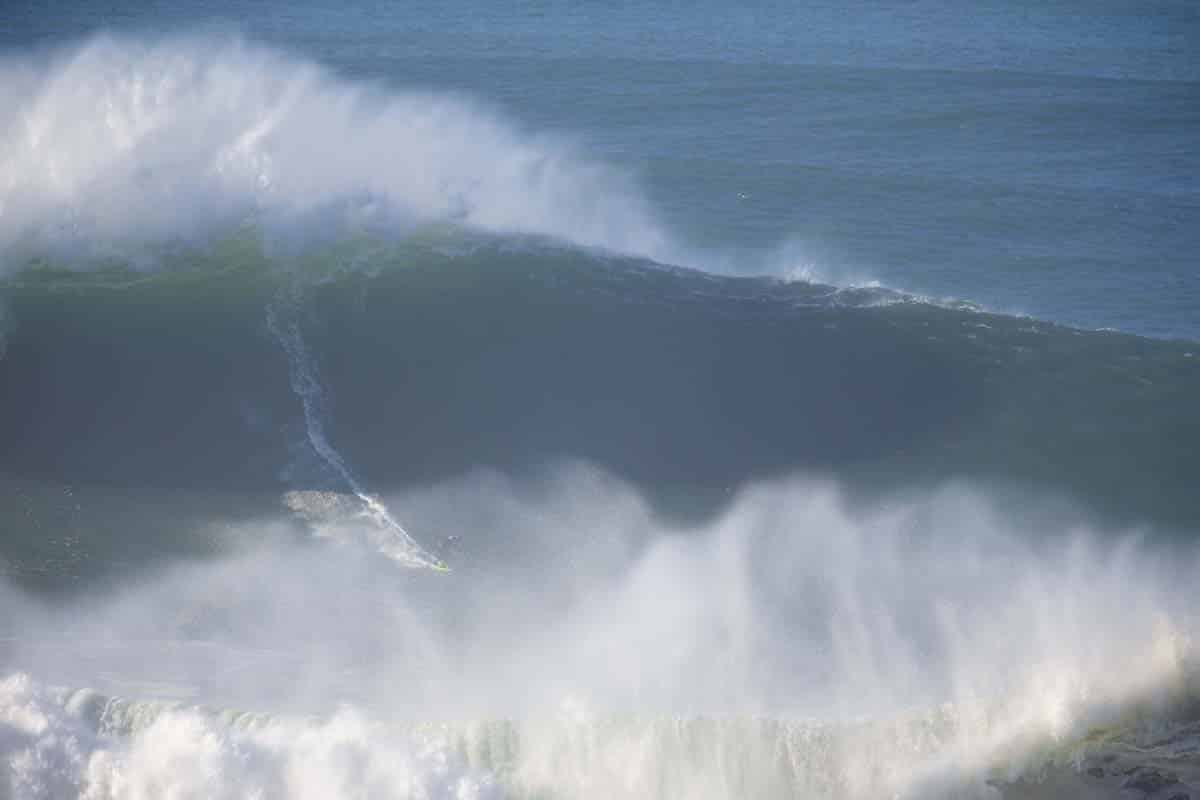 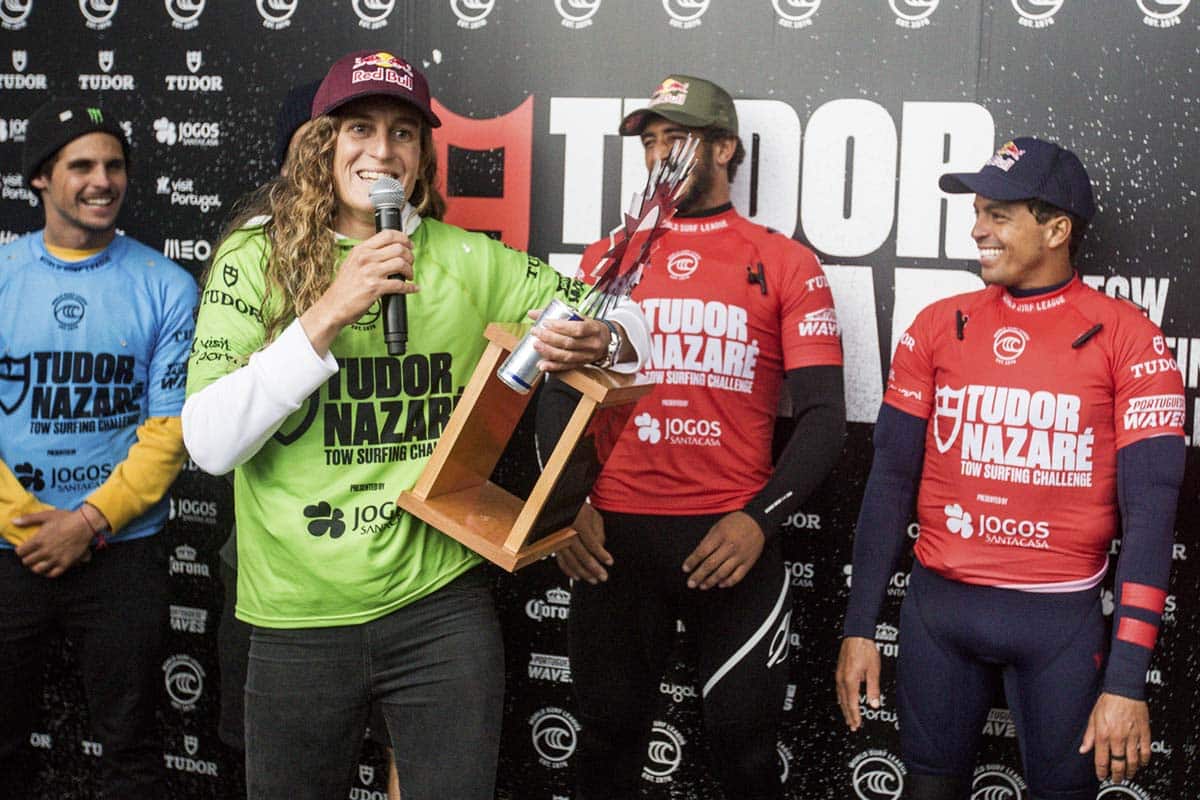 When the dust settled on the six, 50-minute heats, the leaderboard standings post first round remained accurate as Lucas Chianca (BRA) walked away with the Men’s Best Performance award for his ferocious attack of the big lefts earlier this morning. Towed in by his partner, and 2020 winner Kai Lenny (HAW), the Brazilian rising star of the big wave world got his time to shine and stepped up with a massive performance.

“It’s an honor to be towing and be Kai’s partner,” Chianca said. “He definitely put me on the best waves of the day for sure and we did our best out there. This is one of the best performances of my life and I’m so stoked.”

The pair successfully defended their 2020 title as the combined efforts of Lenny and Chianca once again put their team atop the leaderboard for the Best Team Performance award.

“It’s a dream-come-true working with someone like Lucas (Chianca) because we’re so like-minded,” Lenny added. “We go out and we know the exact waves we want and we’re trying to push our performance as far as we can in the airs, barrels and turns, and we’re just having so much fun out there.”

Despite a close call in her second heat, with the interference that could have cost her the victory, Justine Dupont (FRA) also managed to retain her title. Her attack of the rights and lefts, carving on the massive wave faces proved once again unmatchable as she claimed back-to-back Women’s Best Performance award.

“This is definitely team work and Pierre (Rollet) was amazing,” Dupont said. “We started coming here to Nazaré together a long time ago so it was awesome to partner with him today and with Fredo on the safety ski. We had so many friends around and it was just so sick to have all our favorite people there to share this.” 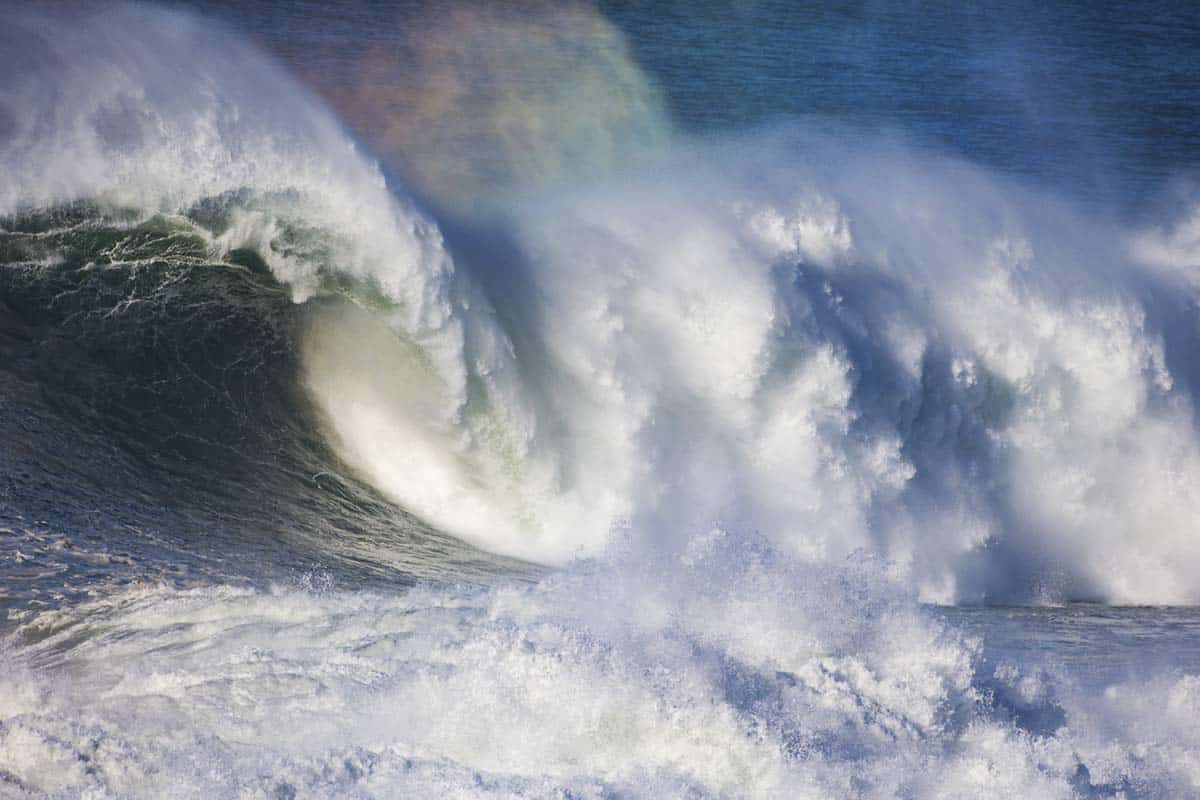 Pressure was definitely palpable in the final heat of the day as Pedro Scooby (BRA) was chasing a relatively low score to push his name and his team atop the leaderboard. The bomb he needed unfortunately never manifested and he had to settle for the second spot in the individual rankings.

But the Brazilian powerhouse’s morning exploits, scoring the deepest tubes and taking maximum risks to put himself in the sketchiest sections won him the Jogos Santa Casa Most Committed Award. 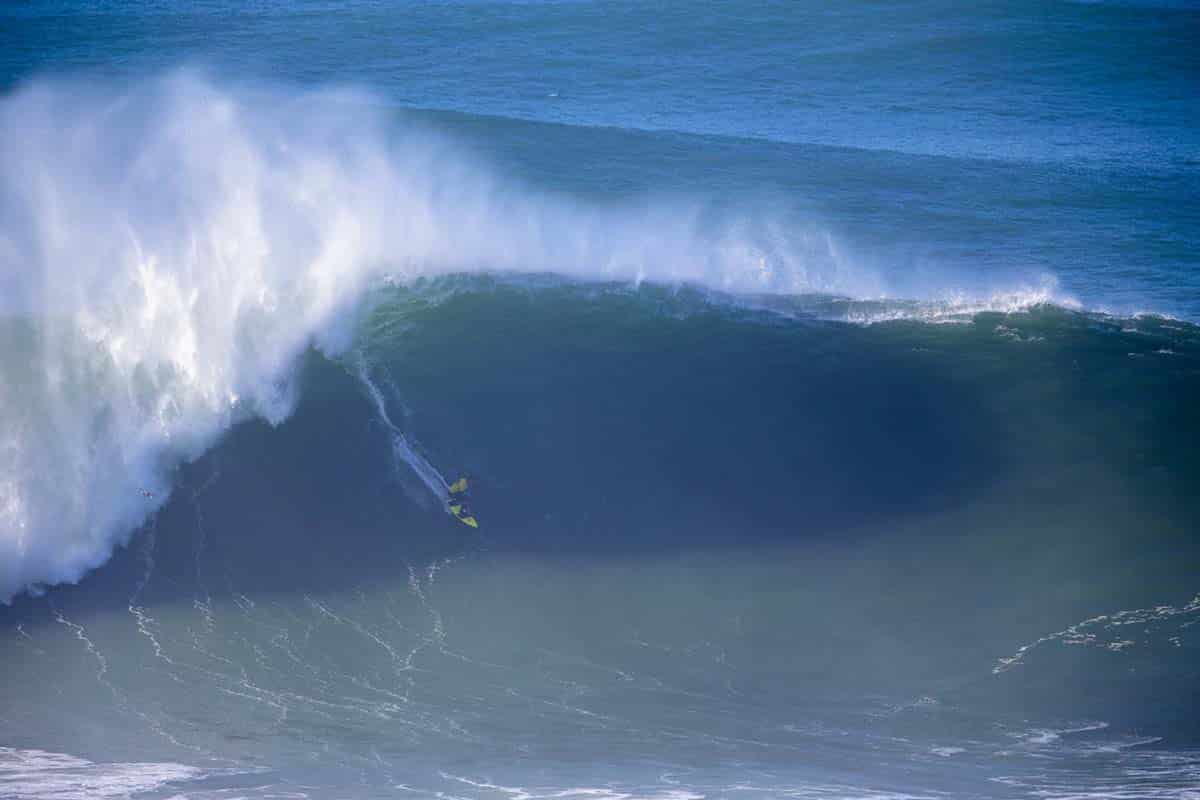 “It was a beautiful day in Nazaré, I love this place,” Scooby said. “Nic (Von Rupp above) deserves a lot of credit for this win, I’m just here to have fun, I don’t have the same level of focus that they have. He pushes me a lot and I really enjoyed being out there.”

With the TUDOR Nazaré Tow Surfing Challenge pres. by Jogos Santa Casa completed today, the best big wave surfers on the planet will now shift their focus to the Pacific and track swells around Hawaii in anticipation of the Quiksilver Jaws Big Wave Challenge presented by TUDOR.