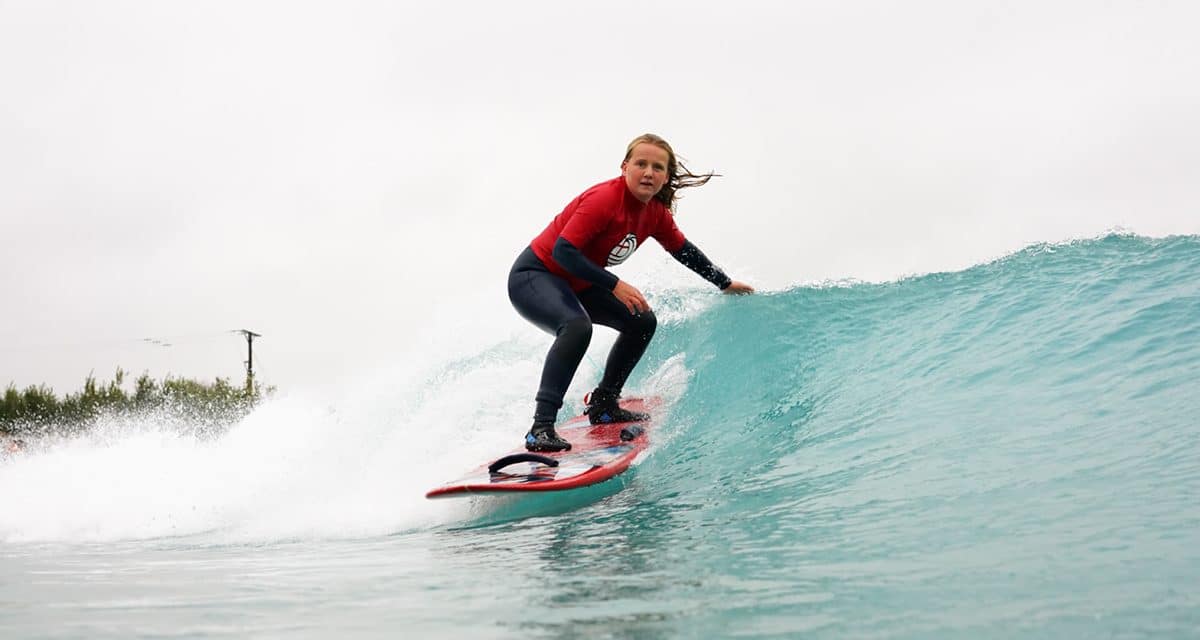 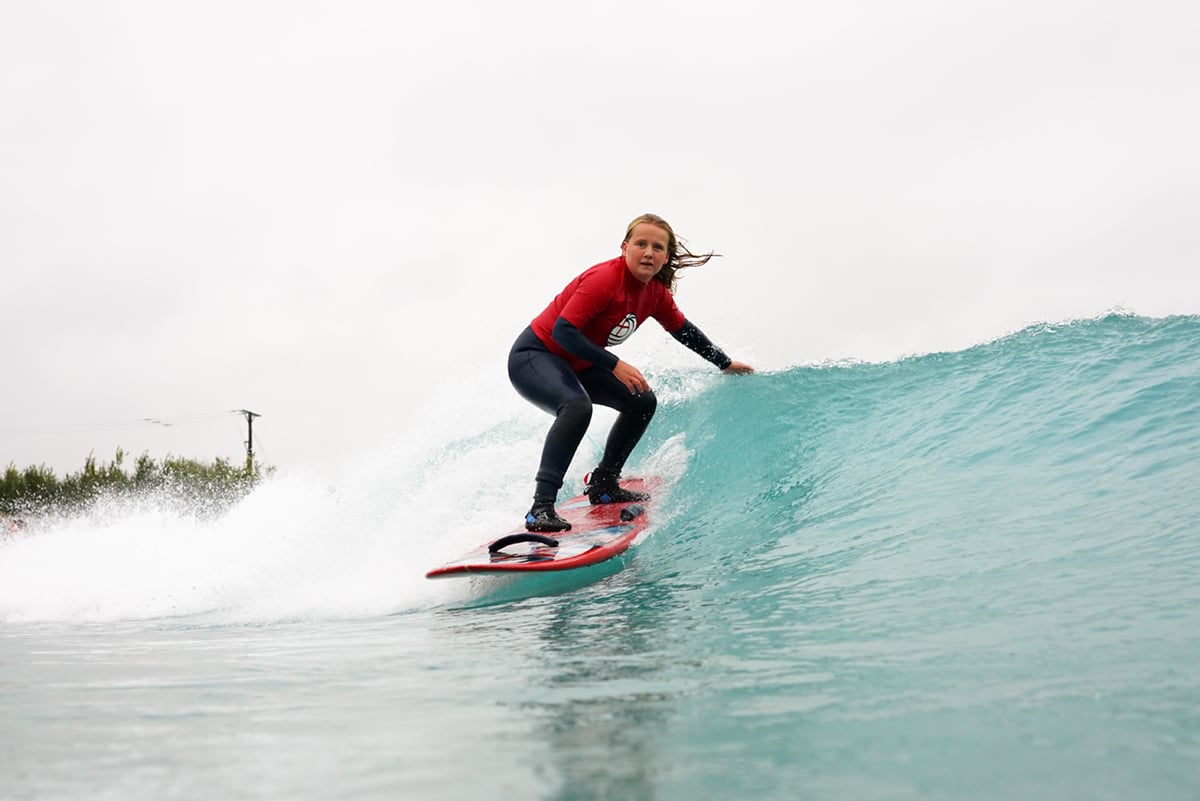 Fierce competition, rivalry, and show-stopping surfing was on show at the 2020 Korev Lager English Adaptive Surfing Open on Saturday 3rd October. A moment in history for English Surfing – It was the first event at The Wave Bristol since they opened their doors a year ago. Surfing England were truly honoured to organise & deliver this event. A stellar turnout of 21 of the World’s Best Adaptive surfers joined us for this iconic event.

And what a day it was – the reflections of what has been achieved are beginning to sink in for all involved. The weekend was set to pound us with relentless wind & rain – should we have been at the beach we would have had to cancel, but The Wave delivered the goods. This is the incredible thing about the venue – it has to be next level extreme for the wavemakers to stop the waves rolling through. Instead, the wind graced us with offshore conditions, yep offshore at our favourite inland surfing destination & we all got the dryrobes out to stay warm, and we were away. 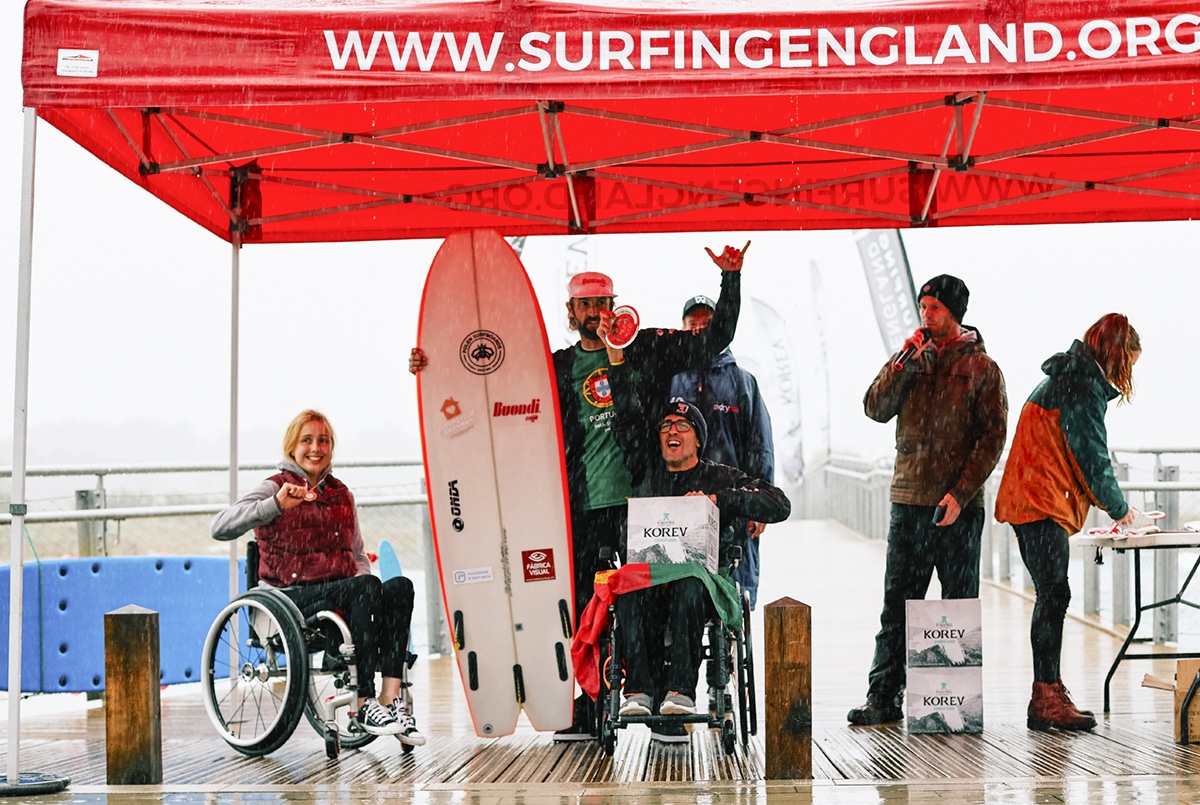 A new format, a new venue, we were excited. Heats started rolling from 9am, surfers showcasing their skills on the lefts all morning, and then shredding the rights in the afternoon. The pressure was on, surfers had 6 waves per division, with their highest wave score on the left and right accumulating to give their final position on the leader board. The format was set to maximise the surf time for competitors, and their adrenaline and energy saw them giving it their all for the full day.
Every surfer pushed their upper limits, stand out moments were Natasha Davies who took on the Advanced Wave setting for the first time, and what a take off she handled. Her surfing was slick. Joining us from Wales, it was Katie Richard’s first surf at The Wave and straight into a competition – totally brave, she joined the line up and took the challenge on. 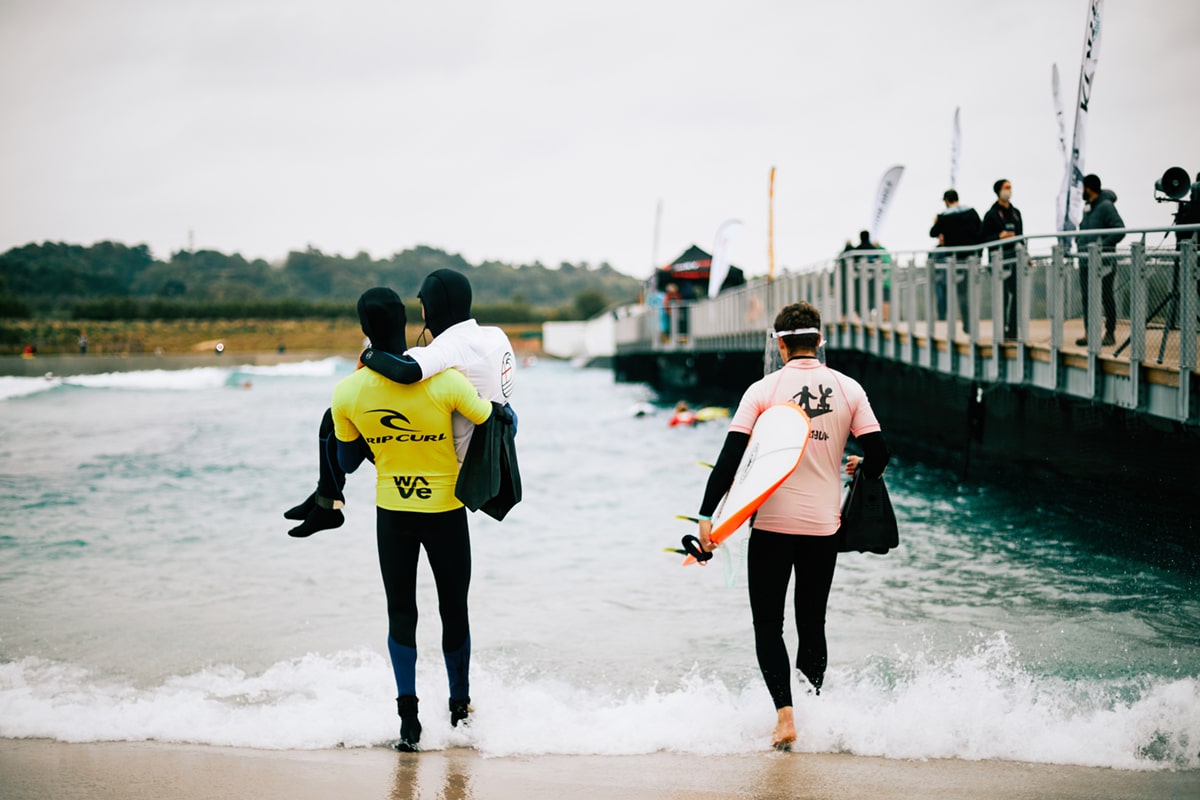 Joining us from USA, Michael Pingatore had been putting some training hours in ahead of the contest and brought some skill to the table. He placed 3rd overall in the Sitting/Kneeling, behind wave local Martin Pollock, and Wales’ Sponge Williams who took the win in both the Sitting/Kneeling and also the Men’s Open. Sponge also claimed the overall highest scoring wave total and earnt himself more surfs at The Wave and an accommodation package for when their huts open next year. Close behind in the Men’s Open was Cornish legend Pegleg Bennett, who claimed the champion position in the Standing division.

Melissa Reid, Visually Impaired World Champion, always brings an impressive performance. She claimed Champion in the Women’s Open and Visually Impaired Divisions, and 2nd place in the Standing. Charlotte Banfield, also renowned surfer, and athlete in the Adaptive scene kept Melissa on her toes with her signature rail grabs and placed 2nd in the Women’s Open, and 4th in the Standing Division, Louis Sutton nudging her off the 3rd place.
Another Welsh one to watch, Ethan Jolosa at just 15 put in a great performance. He is one to have eyes on for the future. Ethan and Bruno Hansen have a fantastic friendship and show rivalry in the water, Bruno coming out on top claiming the Champion position in Prone Division, with Italian Massimiliano Mattei, just behind in 2nd, Ethan chasing the tail coming in 3rd. 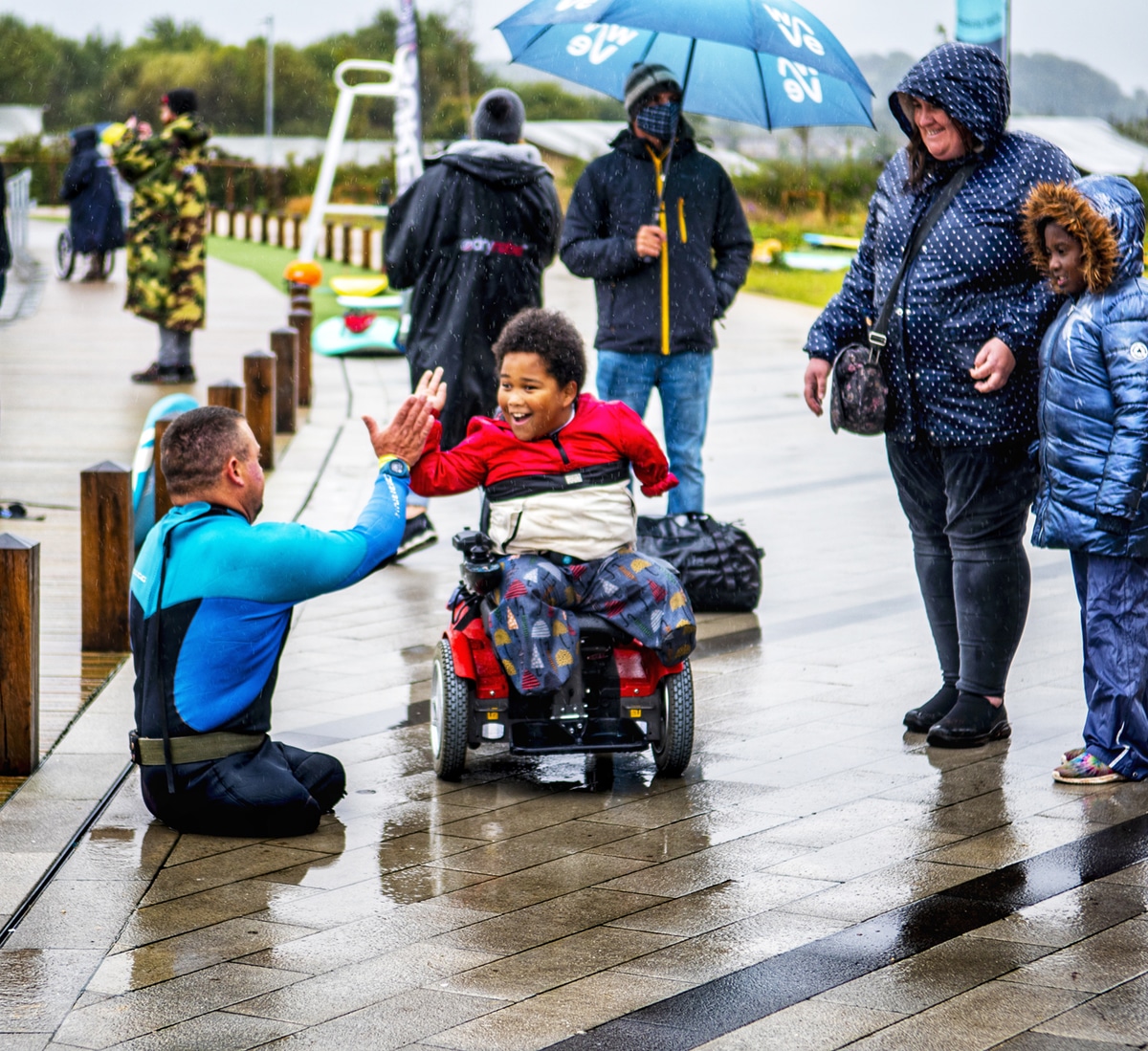 The Event is not only a place for competition, it is also a place where dreams are realised, and life-changing moments take place. David Lewis who has a Visual Impairment described how the event had given him “hope and optimism for the future”. This is incredible.
Young surfer Jeremia, aged 7, who has not yet joined the contest environment but loves surfing – his Mum got in touch just after the event to say “He was so excited to meet Martin! (Martin Pollock, known as 1limbsurfer). In a week where some kids at school has told him he was ‘scary’ because he was born with missing limbs.. he met his hero.. he saw him surf (Jeremia also loves to surf) and he vowed to be just like Martin when he grows up.. it was one of the highlights of my life”. This is the strength of Adaptive Surfing, this is the ethos of Surfing England, every person should have an opportunity to surf and a place in the line-up.
Nick Hounsfield, Founder of The Wave and Surfing England Chair states “this was a dream being realised and I am unbelievably proud of everyone involved. We’ve been working together at The Wave and Surfing England for years now to support the English Adaptive Team and grow the adaptive support for the future. The event was the culmination of our combined efforts and the success will be the springboard for future events, further funding and a drive towards the Paralympic future.” 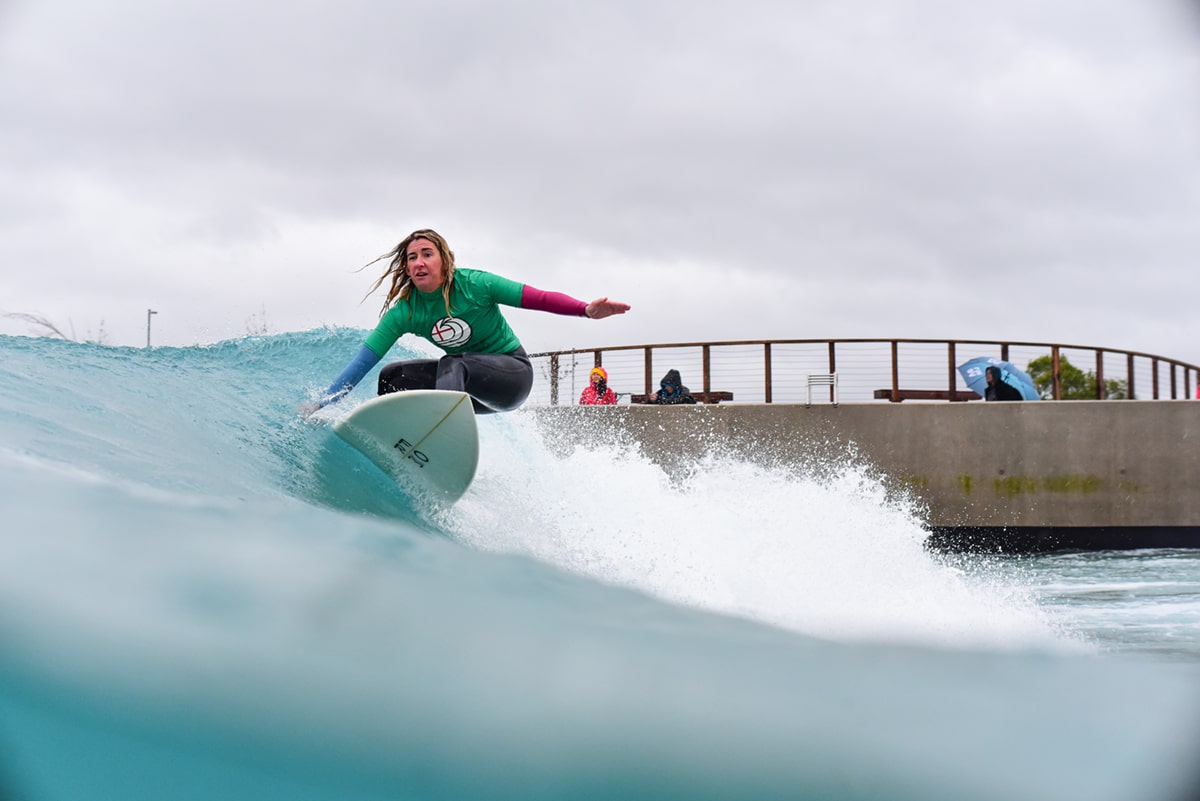 Surfing England Operations Manager Hannah Brand said “for our first event at The Wave we are absolutely overwhelmed with the success and positive feedback. A huge thank you to the team behind the event and volunteers who supported us to make this happen. The calibre of surfing was sensational and everyone who had a place in this weekend’s contest should be very proud. We are calling for funding for surfing so we can take the whole sport and Adaptive Surfing even further in England. All eyes on the future.”
If reading this has inspired you, you can be a part of the future of English Surfing. Membership to Surfing England is a fantastic way to stay connected to all the essential news and support the organisation and sports growth and development. Individual Members (for just £18-£25/year) receive insurance when surfing anywhere in the World. To find out more and sign up, click here. 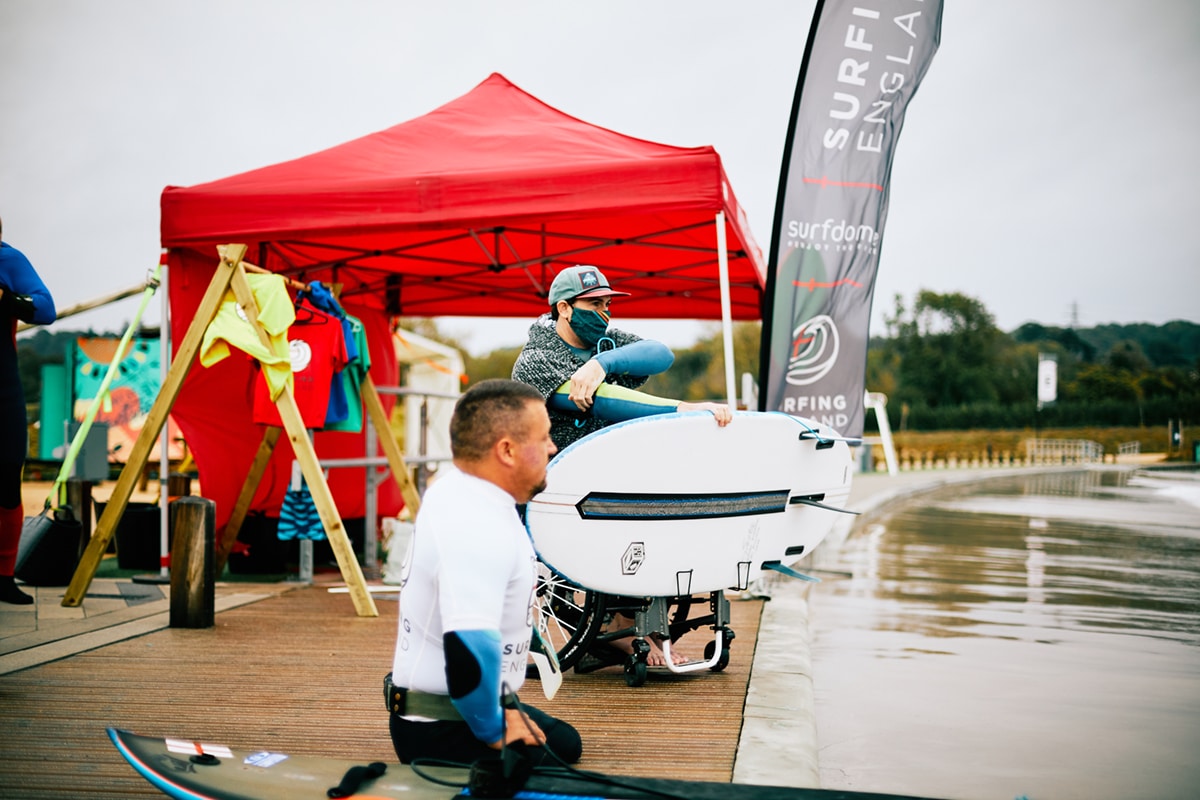 On behalf of all the surfers and Surfing England, we wish to thank all the volunteers and staff who put in so many valuable hours to support Adaptive Surfing. A note to Andy Joyce, Adaptive Team Manager, and Matt Harwood, Team England Adaptive Coach, and Ben Clifford and all the team at Surfability UK CIC who provide invaluable support and water safety.
A huge thank you to The Wave for hosting us, a particular note to Nick Rees, who charged on from The Wave team to help us bring this contest to fruition, and Abby Richardson and Jayne Randall for fantastic support on media.