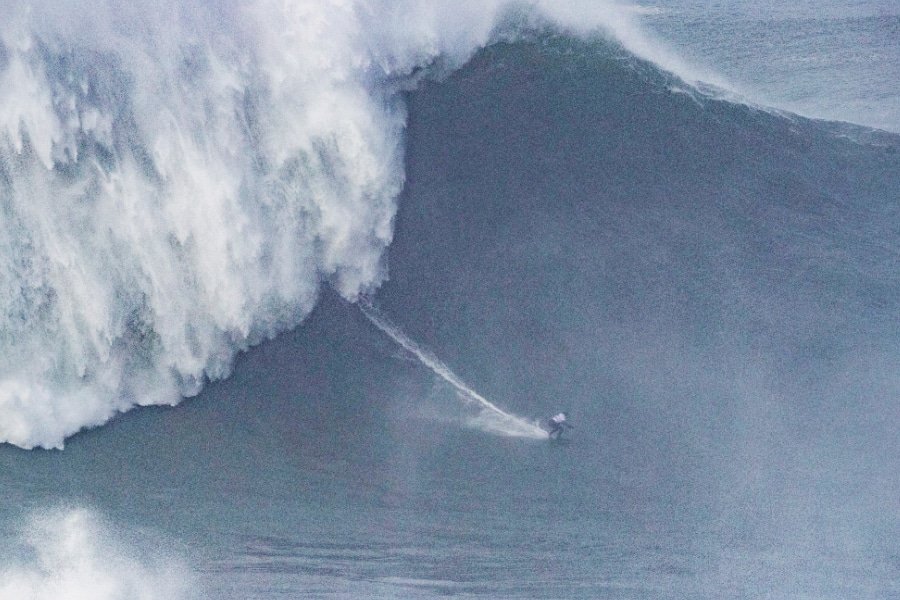 “This wave was during the [WSL Nazaré Tow Surfing] contest and although I say I’m not a competitive person, I was very in the zone and braver than I usually am on this day,” said Gabeira. “I was risking more than I usually like to do. When I let go of the rope, I had a feeling it could be the one but wasn’t sure. The speed was very high but the noise that the wave made when it broke made me realize that this was probably the biggest wave I’d ever ridden.”

Gabeira’s record-setting wave measured 73.5 feet, besting her own previous World Record, 68 feet. She broke the record at the infamous big-wave surf break, Praia do Norte in Nazaré, Portugal, on February 11, 2020, as part of the WSL’s inaugural Nazaré Tow Surfing Challenge event. Although the men’s and women’s divisions are separate for this category, Gabeira’s ride also beat the men’s cbdMD XXL Biggest Wave, which was won by Kai Lenny (Paia, Hawaii) and measured 70 feet.

“This World Record really strikes me as quite amazing because the size of the wave was measured taller than the men’s size for the winner, so it means a woman actually rode the biggest wave of the year overall,” continued Gabeira. “That to me was something I had dreamed of years ago but not as something realistic. There was no representation for me to believe that it was possible but to see that happen is incredible. This is seen as an extremely male-dominated sport, so to have a woman be able to represent that is quite rare.”

“I am a big fan of Justine (Dupont) and what she has been doing at Nazaré,” said Gabeira. “I think it’s one of the reasons I kept pushing myself. I was on the edge of retiring a few years ago and then I saw her evolution and thought I have to keep up for a few more years. I really didn’t expect to go any bigger or anything like that, but I kept riding and enjoying my time at Nazaré and that wave was quite special although it was quite terrifying as well.”

Despite measuring only a few feet shy of the 2020 cbdMD XXL Biggest Wave Award and the World Record, Dupont celebrates an incredible season with wins in the Ride of the Year and Performance of the Year categories. Dupont, the 29-year-old from Seignosse, France, is one of the most decorated women in big-wave history and will continue to push the boundaries of big wave surfing.

“This wave was really special and every one said to me that this wave was really special from the shape to the footage, all the angles, and the size,” said Dupont. “Everything made this wave special and having all the community speaking about it like this was a big reward. It is not about a performance for a woman but a performance for a surfer. Having Kai (Lenny) and Lucas (Chianca), the best in the discipline, wanting to surf this wave, and I was on it, so I am really stoked. This wave is special so having the Ride of the Year means I had the best line possible on a giant wave and I made it.”

The rides submitted for the women’s cbdMD XXL Biggest Wave Award by Dupont and Gabeira were incredibly close and a potential World Record. As such, WSL deemed it important to have the data reviewed by an independent scientific team as a critical point of reference for the determination of the biggest wave. The team included members from the WaveCo Science team, the Scripps Institution of Oceanography, and the University of Southern California, Department of Aerospace and Mechanical Engineering.

The analysis was based on video and photo imagery, camera locations, camera lens parameters, and environmental conditions, including tides, sunlight, and wave set-up. Collinearity equations were used to transform the image coordinates into real-world coordinates based on estimates of the geometric parameters, including the height of the cliff at Nazaré. In addition, fixed reference points in the imagery, including the surfers’ heights, surfboard and jet ski dimensions, and estimated crouching heights, were utilized in the scientific calculations.