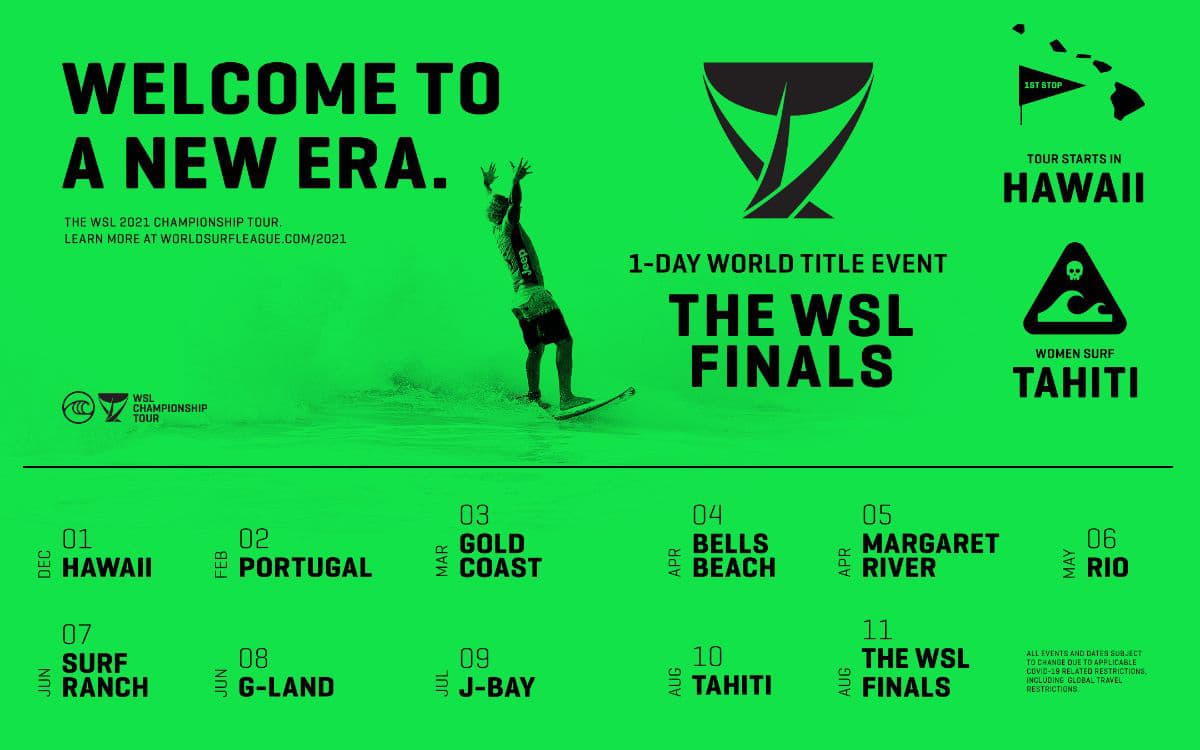 With the health and safety of athletes, fans, employees, and the local communities remaining the organization’s top priorities, and considering the challenges of international travel currently, the WSL has officially canceled the 2020 CT and Qualifying Series (QS) seasons.

“After careful consideration and extensive discussions with key stakeholders, we have made the decision to cancel the 2020 Championship Tour and Qualifying Series seasons due to the COVID-19 pandemic,” said WSL CEO Erik Logan in a video released on WSL channels today. “While we firmly believe that surfing is amongst the sports best suited for competition to be held safely during the age of unresolved COVID, we have huge respect for the ongoing concerns of many in our community as the world works to resolve this.”

The 2021 tour will start in November 2020 in Maui, Hawaii for the women and in December 2020 in Oahu, Hawaii for the men, subject to the approval of the State of Hawaii and local government agencies, as well as effective protocols that allow for safe international travel. The 2021 CT season will finish with ‘The WSL Finals,’ a new single-day World Title Event in September 2021.

‘The WSL Finals’: The men’s and women’s World Titles will be decided in a single-day event, ‘The WSL Finals’. The top five women and top five men following the 10-event CT season will battle for their respective titles in a new surf-off format at one of the world’s best waves.
Equal number of women’s and men’s CT events: The 2021 CT will include 10 events each for both the women and the men, an equal number of events for the first time ever, with the women joining the men to surf at Teahupo’o, Tahiti, one of the world’s most iconic and demanding waves, for the first time since 2006.
Seasonality of the tour: In addition to the redesign of the CT, the schedule will be updated to create distinct seasons between the CT and the Challenger Series (CS). Starting in 2021, the CS will run from August through to December. The QS will run through to the end of June 2021 and determine who has qualified for the Challenger Series. Points from QS events that were completed in 2020 will carry over into 2021. 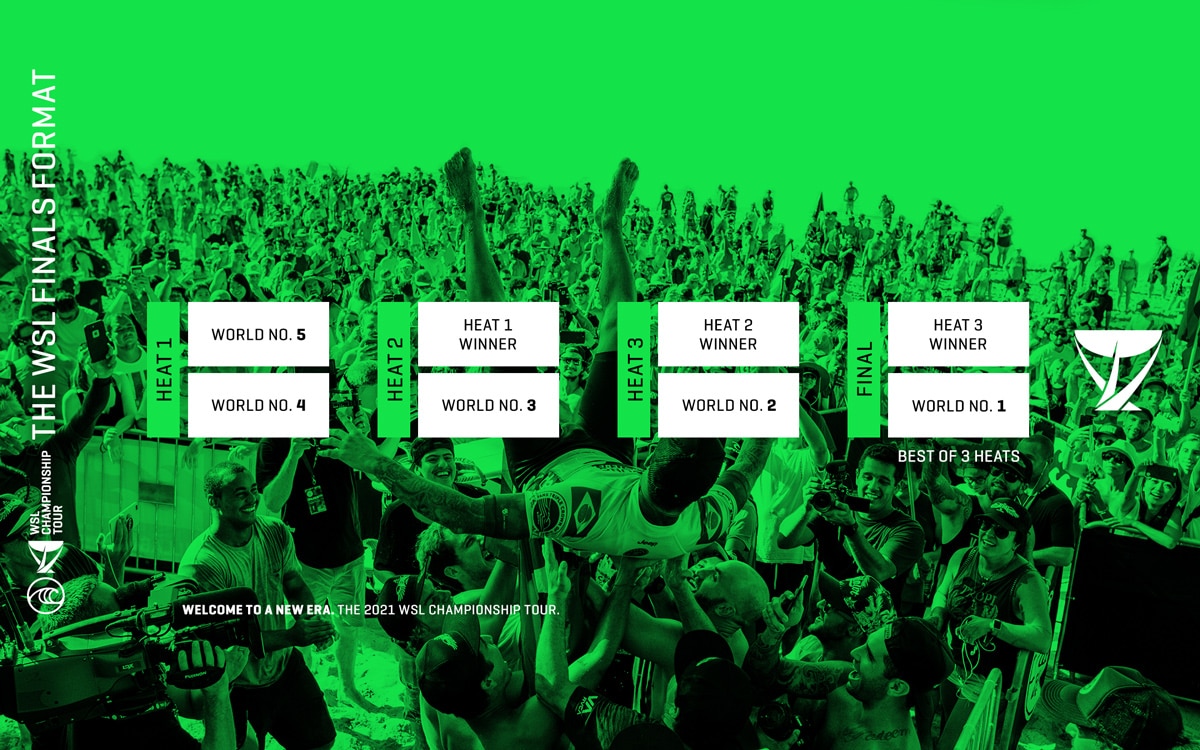 This evolution has been part of a multi-year discussion, and the final design is a collaboration between the athletes, partners, and the WSL.

Tatiana Weston-Webb at Teahupo’o, Tahiti, which will rejoin the women’s tour for the first time since 2016. Credit: WSL / Dunbar

“I’m really excited about these new format changes,” said two-time WSL Champion Tyler Wright. “As someone that has spent a lot of time out with injury and on the couch in the last few years as a professional spectator, I feel that change is good and needed. Having Tahiti come back on the schedule will be interesting and challenging. It will take us a few years to get our feet and positioning in. However, with the next generation of strong and talented women coming through I think we’ll soon have Tahiti specialists.”

“The WSL format, timeline and location updates will make for a very exciting and intense 2021 tour and World Title chase,” said two-time WSL Champion John Florence. “It’s great being a part of the WSL, especially as we evolve and adapt to new challenges. I look forward to competing in this new era.” 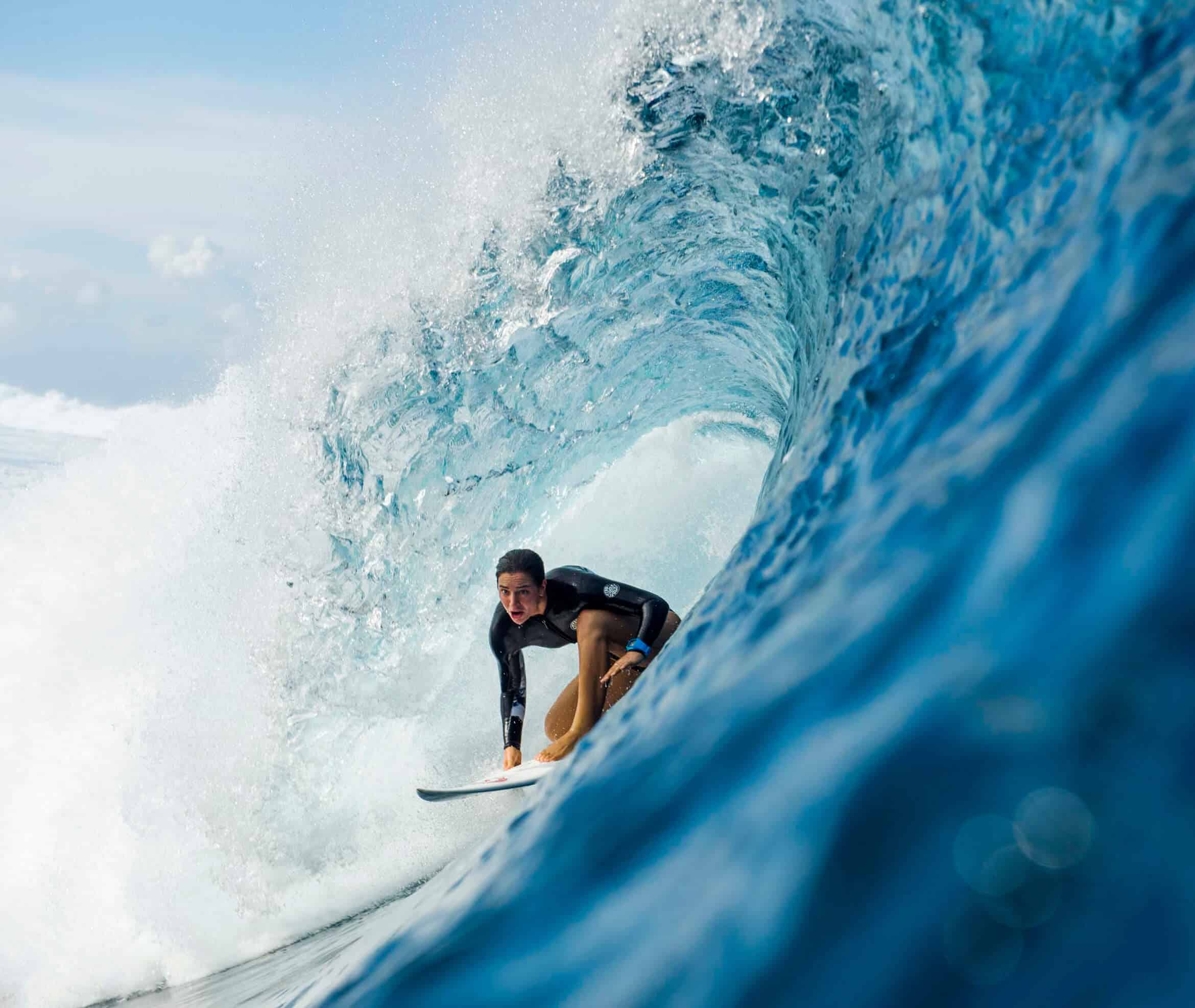 Tyler Wright who’s been off the Tour for a few years is looking forward to the new format and surfing Tahiti again. Photo Rip Curl/Corey Wilson

* All events and dates subject to change due to applicable COVID-19 related restrictions, including global travel restrictions

The enhancements to the 2021 CT began with the ​timing of the WSL Finals​, causing subsequent adjustments to some Tour locations. Due to optimal wave timing, the Championship Tour will no longer include Hossegor. However, the WSL, in close partnership with Quiksilver and ROXY, are committed to the region and look forward to hosting an important Challenger Series event in France in 2021.

The Taiwan Open Of Surfing which includes the WSL World Junior Championships and QS Men’s 3000 and QS Women’s 5000 events will be postponed in 2020 and hopefully will run late January early February 2021.

In addition to the changes for 2021, a mid-season cut will be introduced for the CT in the 2022 season. By reducing the men’s and women’s fields from 36 and 18 to 24 and 12, respectively at the season’s midway point, events can run within the most optimal swell cycles at locations like G-Land and J-Bay, as well as ensure that the stars of the sport meet head to head more frequently. Given the challenges around COVID-19 and the transition year in 2021, the cut will not be implemented until the 2022 season, meaning all qualifiers for the 2020 CT season will get to surf a full season when competition returns later this year.

More information on the status of WSL’s other tours – including the Challenger Series, Qualifying Series, Big Wave, Longboard, Pro Junior – will be made available on the event pages on WorldSurfLeague.com.

The WSL Countdown: Specialty Events to Be Held in Australia, USA, Europe

To bring world-class competitive surfing to fans during a time of restricted international travel, the WSL will host a series of regional, pre-season exhibition events featuring CT surfers in the USA, Australia, France, and Portugal called The WSL Countdown.

In the US, Surf Ranch will host Rumble at the Ranch, a special mixed-gender team format event in August. In Australia, the Australian Grand Slam will feature strike mission events at the Gold Coast and Margaret River over the months of September and October. In France and Portugal, the Euro Surf Cup will feature regional CT stars in late September and early October.

The WSL’s stringent health and safety procedures for these local events, which were developed through consultation with public health, local and state officials, have been informed by guidelines set by the Centers for Disease Control and Prevention, World Health Organization, and emerging best practices established by other sports leagues and broadcast-only live sports events.

These preseason exhibition events will utilize a variety of formats, and will feature some of the world’s best surfers. All events will be broadcast on WorldSurfLeague.com. More details on the WSL Countdown will be available soon.