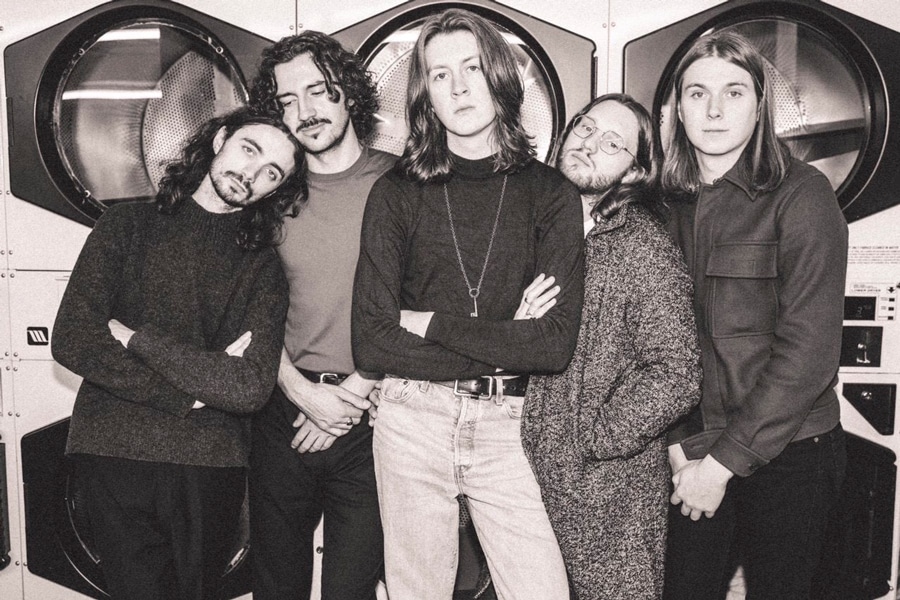 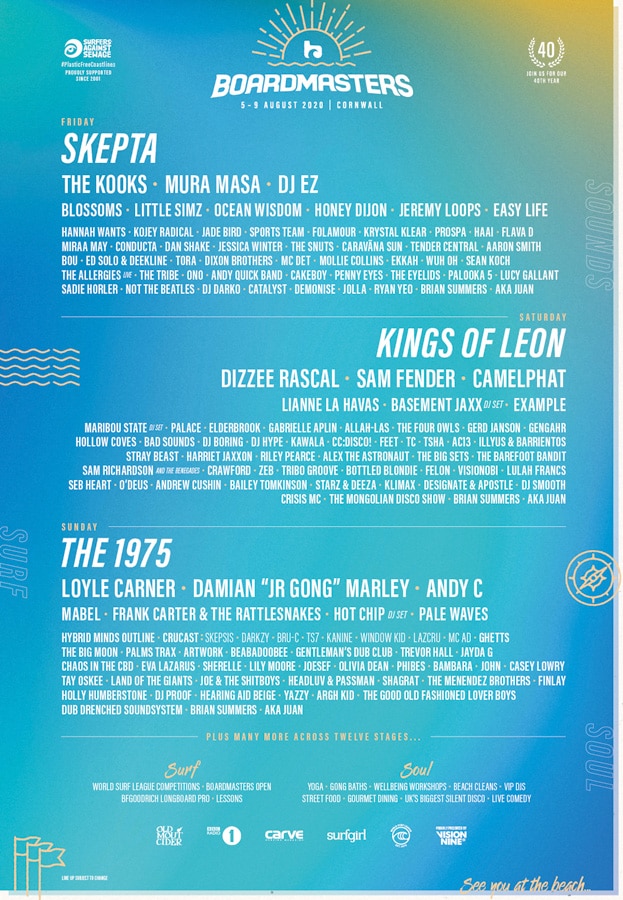 Today, Boardmasters announces over 40 more acts for this year’s festival with their 40th year set to be their biggest yet. World-class acts including Blossoms, Hot Chip, Maribou State, Kojey Radical and Easy Life will be heading to the Cornish coast where they will join headliners Kings of Leon, Skepta and The 1975, and many more for five unmissable days of surf and music from Wednesday 5 – Sunday 9 August 2020.

With Boardmasters announcing their biggest ever line up, tickets are flying. Day tickets for Saturday 8 August, headlined by Kings of Leon, are due to sell out in the next two weeks. Book camping and day tickets NOW via their website before its too late.

Blossoms will be hitting the Boardmasters Main Stage on Friday 7 August. Flying the flag for Stockport, the five-piece are riding high after starting the year off scoring a no.1 album with the widely acclaimed ‘Foolish Loving Spaces’. With a catalogue of joyous hits in their arsenal including ‘Charlemagne’, ‘Your Girlfriend’ and ‘There A Reason Why (I Never Returned Your Calls)’, fans can expect an unashamedly fun and euphoric set as Blossoms’ summery mix of pop, indie and funk makes waves across Watergate Bay.

Hot Chip headline The Point on Saturday 8 August with a very special DJ set on Sunday 9 August. A great British pop sensation, Hot Chip are an unstoppable force who have been delighting fans and dominating dancefloors with their catchy synth-pop for two decades. This summer, fans will be treated to a shimmering, no-holds-barred set sure to keep everyone dancing way beyond sunset.

Also heading to The Point are Maribou State who will take to the decks on Saturday 8 August, to deliver a huge DJ set. Following a year taking the UK, Europe and North America by storm with their latest tour, the duo are heading to Boardmasters with their feel-good fusion of electronica and instrumentation. There will be summer sounds and sunset beats in droves, as Maribou State bring a heady mix of funk, soul and energy to Watergate Bay.

Over at the Land Of Saints, British poet and artist Kojey Radical is not to be missed. The London rapper is widely recognised as one of this generation’s most talented storytellers, with his latest EP ‘Cashmere Tears’ skillfully weaving a beautifully emotive take on modern life. A true wordsmith with social and cultural relevance to his lyrics, there’s good reason why Kojey Radical is at the very forefront of the UK rap scene. Catch him at Boardmasters on Friday 7 August 2020.

Hot on the heels of their NME Awards win for ‘Best New British Act’ this month, the unstoppable Easy Life are coming to the Main Stage at Boardmasters this August on Friday 7 August. The Leicester lads blend a smorgasbord of musical styles, with melodic pop, jazz, hip-hop, electronica and much more creating their unique sound which defies genres and doesn’t play by the rules. It’s been a whirlwind year for the five-piece with festival slots, plus an appearance on Later With Jools Holland. With a hotly-anticipated debut album in the works and hits including ‘Nightmares’ and ‘Earth’, their Boardmasters performance will undoubtedbly be a spectacle.

Boardmasters has also unveiled over 40 more acts for 2020. Camden indie-pop band Kawala is heading to the Cornish shores along with, the refreshingly honest songstress Olivia Dean, Germany’s own Gerd Janson, TSHA with her EP ‘Moonlight’ out now, plus singer songwriter Hannah Humberstone who is supporting Lewis Capaldi on tour this year.

Boardmasters will continue its tremendous work to keep the festival and the Cornish coastline cleaner than ever before. There will be beach cleans in partnership with Surfers Against Sewage throughout the year as well as during the festival. The successful re-useable cup scheme will continue, along with a litter bond on all camping tickets to incentivise campers to pick up their litter and recycle, and much more in place to make Boardmasters as clean, environmentally-friendly and enjoyable as possible. This is all part of the mission to have eradicated all non-essential single use plastics from Boardmasters by this Summer’s festival.

Beyond the music, Boardmasters returns with its epic World Surf League Qualifying Series surf competition, where the biggest names on the international surf scene will battle it out in the Boardmasters Open and BFGoodrich Longboard Pro at Fistral Beach. Past winners include the who’s-who of European professional surfing, as well as international athletes enjoying the British summer vibes. It’s an opportunity for local athletes to challenge some of the best competitors on the QS tour, and British fans to feast on high-performance surfing at their local beach break.

The festivals dedicated wellbeing area, Zennor Haven will be the perfect place to unwind and relax, with yoga, mental health workshops, healthy food offerings, meditation and much more.The UK’s largest Silent Disco will make a hotly-anticipated return on Wednesday 5 and Thursday 6 August as scores of festivalgoers kick-start 2020 proceedings at the Watergate Bay Main Stage.

Inspired by the freedom, adventure and creativity of surfing and music, Boardmasters was born in 1981. Expect parties that run late into the night and a beautiful beach to recuperate on during the day. The five-day event is situated across two stunning locations in Cornwall – UK surfing mecca, Fistral Beach, where world class International Surf Competitions take place, and the most stunning location in the country to watch live music, Watergate Bay.

Book your tickets here now, and see you at the beach!