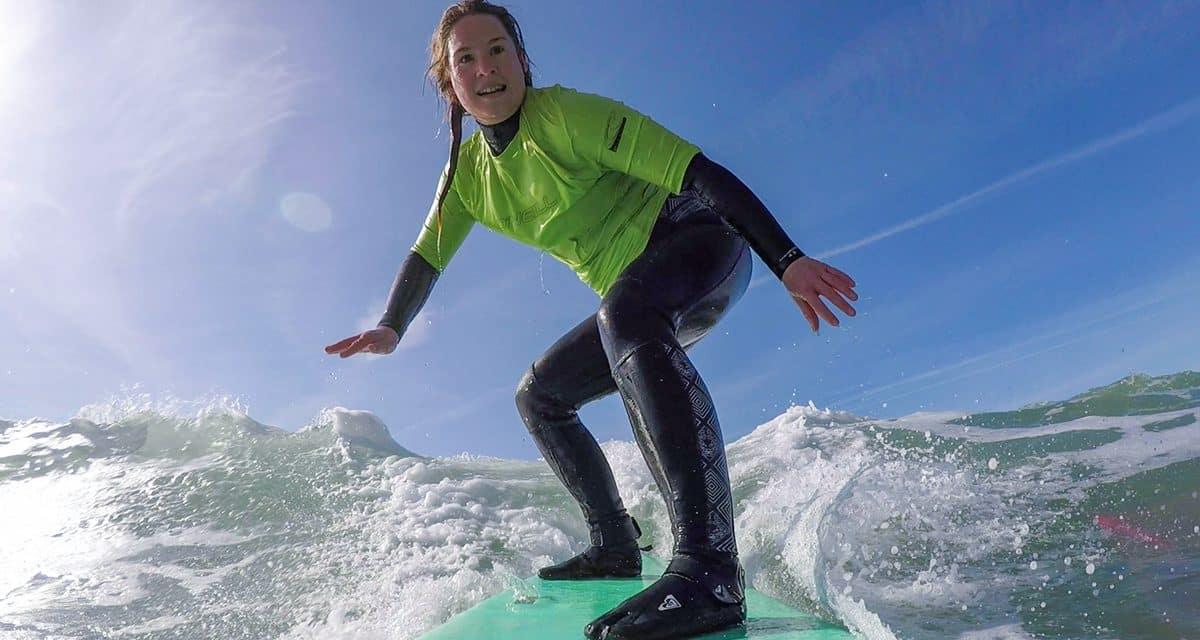 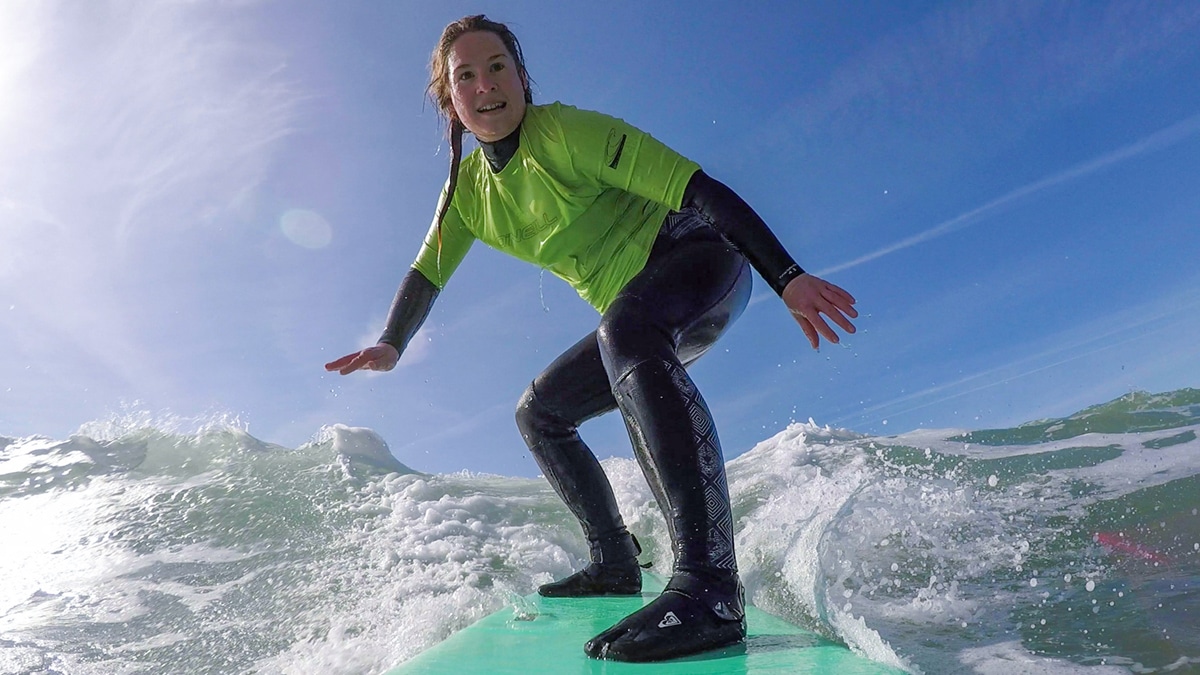 “I think the ocean is winning.” I say to no one in particular, as the final wave of the set finishes dumping its heavy load on my head. Some lightheartedness to keep me grounded in this ocean.

I am learning to surf, and this is my first time paddling to Out Back; an elusive place beyond the baby slopes of surfing where the waves get bigger and the surfers get better. You hear a lot about Out Back when you are learning to surf. Not all of it is entirely reassuring.

For me, Out Back has been an experience in patience and breath-holding. And, as always with surfing, persistence.

I have been surfing at this particular surf school, and with this coach for a couple of weeks now; learning new techniques and developing skill on small unbroken waves. He knows my abilities and I trust him in his judgement when he says we are good enough to paddle out. I am nervous and excited. It feels like the right time, too good an opportunity to miss. As we pull into the parking however, I feel the nerves increase. The waves look enormous and the skill of those riding them seems very — skillful. Even the ever steady Bruno seems to waiver for a moment as he pronounces in his sing-song Portuguese accent, “Hmm, not as small as I thought”.

We are lucky. It is still early morning on a weekday, and as we stand on the beach for our briefing there is less than a handful of surfers in the water. The paddle, despite looking like no distance, leaves the spot between my shoulder blades burning and my arms feeling weak. 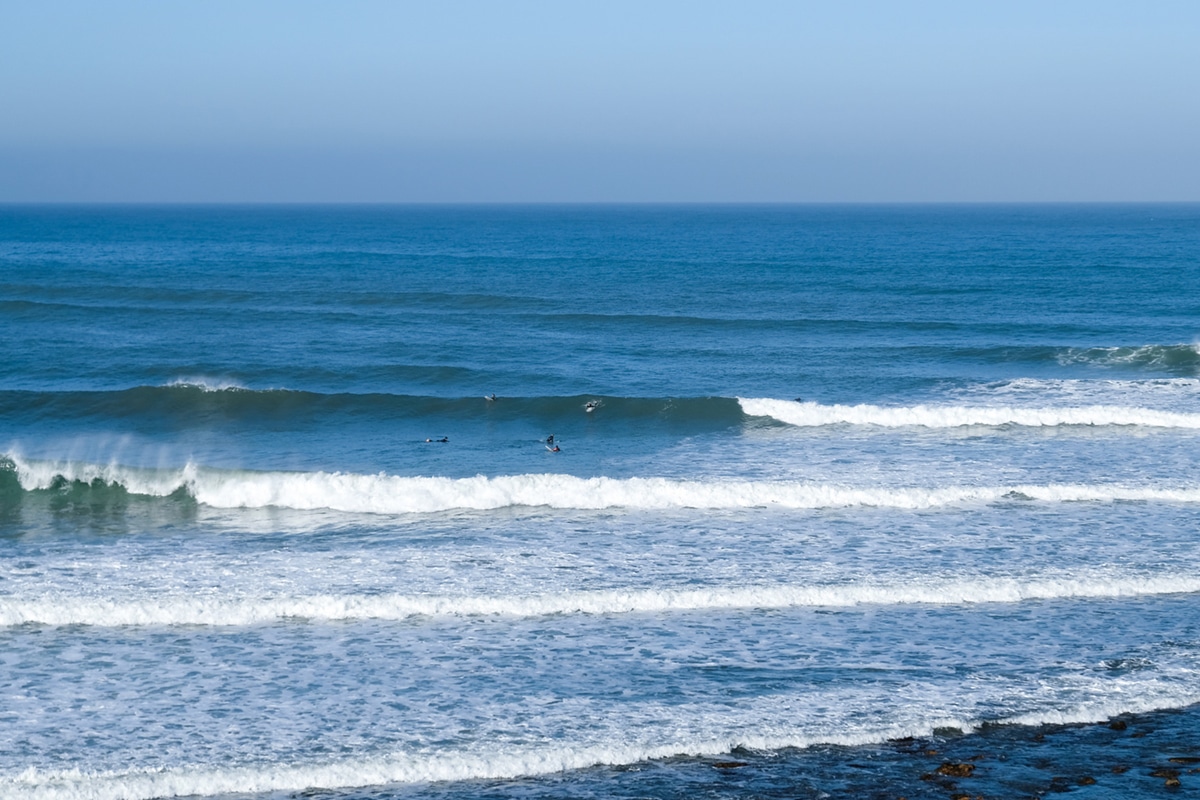 Bruno keeps us all together, while he sits on his board watching the incoming waves and gauging which ones will be good for us to take. From this vantage point they seem truly huge and steep and fast. We are all quiet as we wait, nervous about what will come next, our focus sharpening with the rolling of the ocean. My two classmates, both of whom have already been to this elusive Outside, go first. Then it is my turn.

“Bora Clare” — let’s go Clare. I paddle over to him, ready to do something, gripping my confidence close to squash the rising trepidation. Thus begins the subsequent beating; an hour of learning lessons about the sea and trying to remember that it is normal. The first wave I try to get just overwhelms me with the speed and steepness. My brain registers what I am asking it to do and gives me just enough time to say ‘absolutely no way’ (and some sort of expletive), before the white water crashes over me and sends me spinning. I resurface on time to see the next wave gearing up to take me swimming again. It is my first experience of the infamous ‘set waves’. I feel the difference in the power and spend an unidentifiable amount of time diving and resurfacing, breathing, diving, rolling, turning, resurfacing — focusing very clearly on staying as relaxed as possible, breathing when possible and making sure I have vague notions of where my board is -if possible. The last set wave passes and there is a second of pure bliss as I look out at flat sea.

“Bora bora Clare, use the channel, let’s go!” I clamber onto the board, undoubtedly an image of pure elegance, and start again. I feel battle hardened, perhaps ironically more confident than before. We had a moment, the sea and I, and neither of us are the worse for it.

Back on the board, there is frantic paddling to get back over the next wave before it breaks, feeling that swooping sensation in my stomach as I safely make it over the lip and my board smacks down on the other side. Lets try again. There follows a series of failed attempts, Bruno growing more frustrated as he sees my confidence starting to waive. I am trying to mentally commit to the waves and throw myself into my effort which means a last minute abort command is too last minute; my board’s tail lifts and sends me nose-under-tail back into the wave’s pocket for some sinus rinsing. By now the water has filled up considerably and I see other surfers watching me with understanding looks of, for want of a better word — pity. People are friendly to me though, giving me happy ‘Bom dia’ greetings, while Bruno promises me that I belong out there, that he has no doubts I can do it and my next wave will take me all the way. 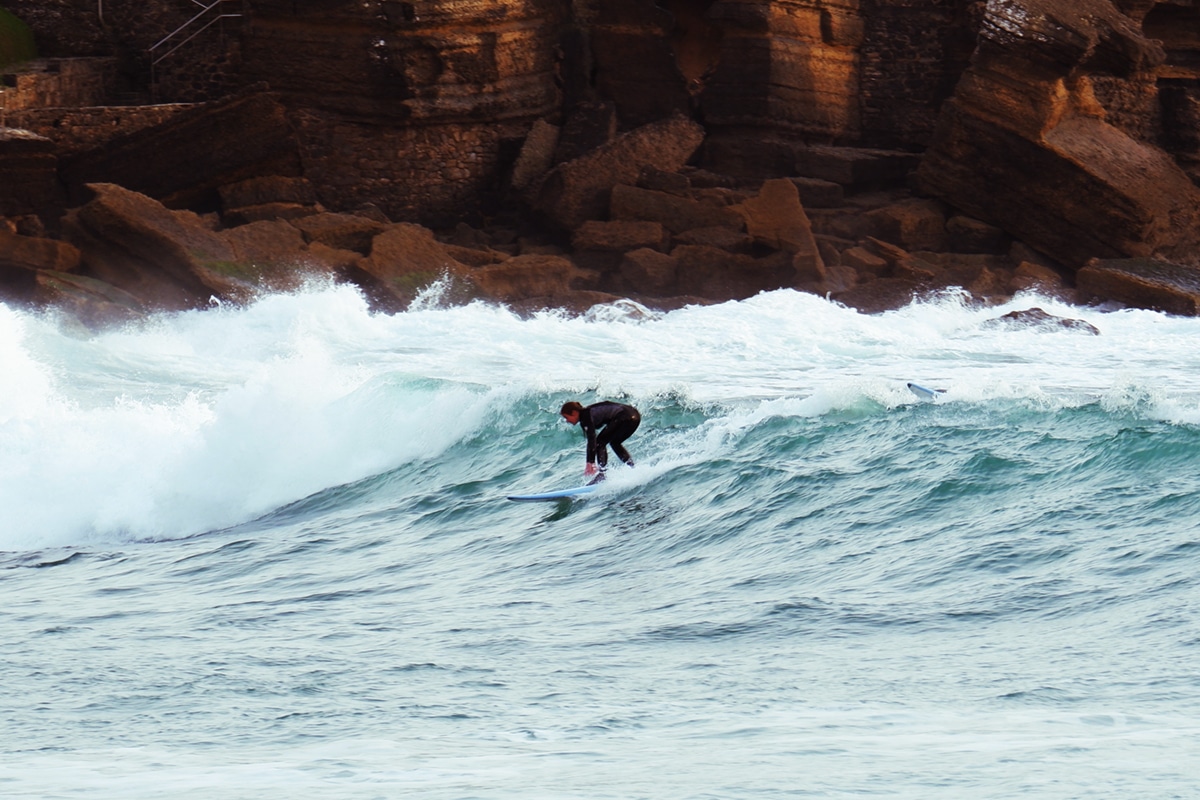 While waiting for the next waves I sit on my board next to Bruno’s and point out simply how happy I am just to have come out, even if I do not catch anything.

“Hey, you try to tell me you want to go in? You think I don’t understand? We’re not ready to go in yet! Next one you will take all the way” He is laughing as he says this, but I can see he is deadly serious. We have been in the water over an hour; I am tired, drained and have truly lost all hope of doing anything today. I am starting to feel like a prisoner of my ambition. I was desperately curious about this Outside, but now I am here I am not sure I should be.

What happens next goes very fast.

Bruno tells me to get ready with a rapid succession of “bora bora”s that has me frantically trying to turn my board around and position myself in an anything but calm manner. The wave feels steep but Bruno pushes my tail into it before I can bail on my attempt. I hear his roar to get up and my body responding while my brain remains blessedly empty. My stomach lurches as the board drops down the wave, wind and spray in my face, arms out for stability. The rail of my board connects with the wall of the wave and quite suddenly, quite unexpectedly, I am zooming through the water. There is a rush, a speed, an adrenaline while my brain lags somewhere behind me. I vaguely hear cheers from surfers in the water and Bruno’s shouts of “Boooooa”. My mind is simultaneously empty and focused. I have tunnel vision, seeing only the space ahead of me where a surfer is paddling hard to get out of my way and I am able to position my body to take the board around him without thinking.

Like lightning, my brain finally catches up with me and I am able to register the wind past my face, the ferocious noise of the wave and that I am surfing. It is amazing! I am almost incredulous, except that it is happening.

I feel my body relax slightly and I trust myself enough to look at the wall of green rather than the water just in front of me. I see the wave rising above my head and something tight breaks inside me to release an unparalleled joy. The wave seems to just go on and on, impossible to say how long, and I glide through the water feeling light and graceful. Eventually I feel the power of the wave softening and see my friendly green wall turning white as it closes out. I leap from my board into the white foam and let myself be rolled by the sea before coming up for air. 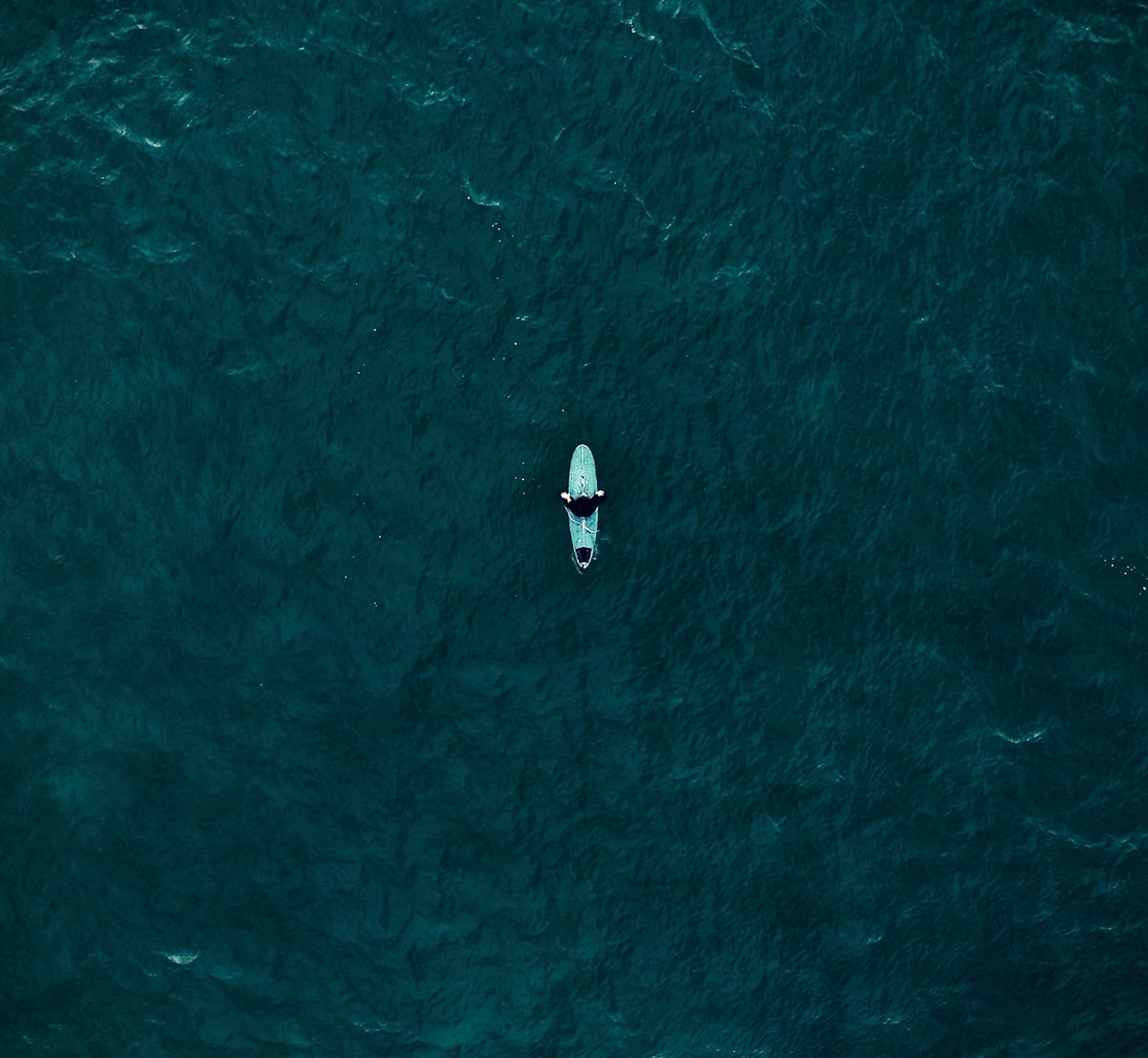 I lie down on my board and start to paddle out, my mind dazed by the wonder of what has just happened.

I break the surface and climb onto my board, breathless. I sit on the board and let the emotion wash over me, hand covering my mouth as I register what has just happened. I am not crying, but I am also not quite laughing. Waves of emotion are coursing through me; I am elated, I am proud, I am relieved and to be honest, I am probably quite hysterical. My muscles are shaking. I see my coach catching a wave to come and join me, full of whoops of joy himself. He lets me bask in the feeling another half minute before he advises ‘come on, we should not stay here, lets go’.

I lie down on my board and start to paddle out, my mind dazed by the wonder of what has just happened.

I spend probably the next ten minutes sitting far enough out that I will not accidentally be caught up in any waves, recovering from the adrenaline. I watch the other surfers and my classmates catch waves and am perfectly happy to be an observer for a while. When the time comes my coach brings me over to the point of impact and informs me that it will be my last wave. I am happy to comply. The wave he chooses comes almost immediately, and I am not centered on the board. Somehow I manage to get myself up and suddenly I am surfing again, only this time I bring my brain with me. The sensation is spectacular as I ride towards the shore, changing my course a bit more to make sure I do not go too far to the right, and trying to avoid the white water as it chases me from the left. My body is more relaxed, my knees bend slightly as I remember what I have been told in my lessons, my shoulders guiding my direction. When the end comes I once again throw myself into the white water and allow myself to be tossed by the sea. I am smiling as I take my shaky legs out of the Atlantic and head up the beach.