Most of Ricochet’s fundraising has been done through social media, such as her popular Facebook Page with more than 259K supportive fans, Instagram with more than 104K followers and her inspirational video “From Service dog to SURFice dog” with more than 6.4 million views.

Ricochet has been raising awareness and funds for human/animal causes since 2009 when she made an independent decision to jump on a surfboard with Patrick Ivison, a quadriplegic surfer. As a result, she became the only SURFice dog® on the planet who creates unique programs, initiatives and surf therapy experiences that empower kids with special needs, people with disabilities, wounded warriors & veterans with PTSD. 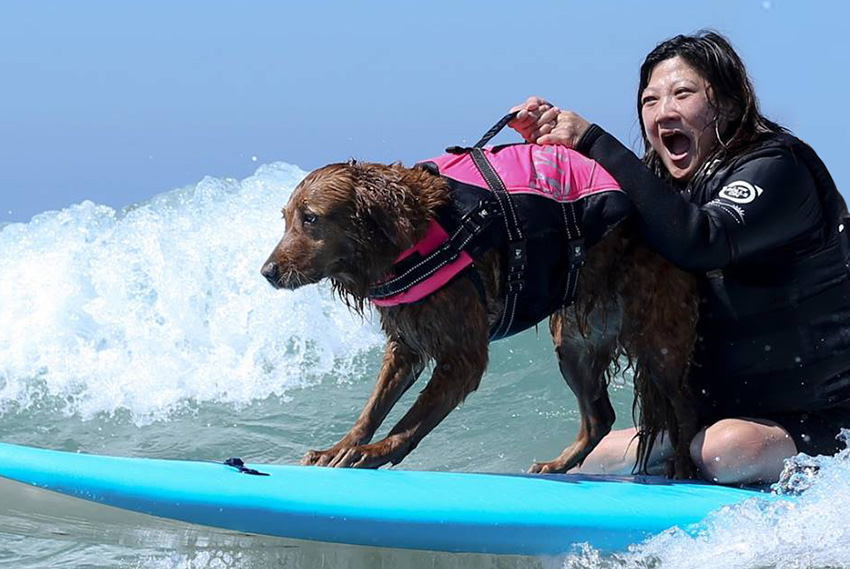 Prior to Ricochet, there were no dogs committed to adaptive surfing. As such, she became the Canine Ambassador for Surfers with Disabilities℠, and revolutionized the healing power of the ocean, and the healing power of dogs. As the years passed, there have been a number of surfing dogs inspired by Ricochet’s work who are now sharing the stoke of surf therapy, such as Sugar the Surfing dog in Huntington Beach, and Leia from Walking on Waves in South Africa. Ricochet acted as a mentor to their program, and made a $500 donation to one of their surf sessions this past summer.

Having more dogs in the line-up comes at a time when Ricochet’s grassroots initiatives have organically evolved to the next level. One of those initiatives is her Waves of Empowerment program that empowers individuals to help themselves by helping others, while maximizing their well-being. These are folks that Ricochet has previously surfed, or worked with, who are now volunteering to help the next wave of disabled surfers get on board with her.

A look at Ricochet’s achievements, aside from fundraising, includes a wide variety of projects that focus on community outreach including her PTSD Battle Buddy Initiative, Operation Socialization, Friends of Bethany Hamilton Beautifully Flawed Retreat, ISA Adaptive Surfing Championship, Surf Away SMA, Life Rolls On, The Best Day Foundation, Veteran’s Adaptive Sports Camp, The Jimmy Miller Memorial Foundation Ocean Therapy program and many more that can be found on her website at www.surfdogricochet.com 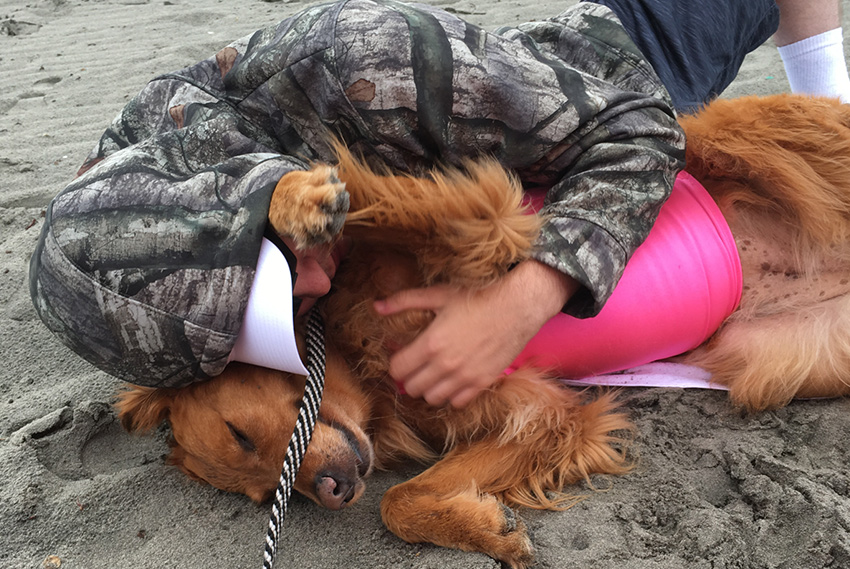 A key to Ricochet’s success was retiring from surf dog contests. Although she typically placed in the top three winning positions, she found adaptive surfing to be the ultimate prize. She has a powerful ability to make immediate, deep, heart-to-heart connections with the individuals she interacts with. She intuitively and empathically alerts to their emotional and physical changes which allows for profound paws-on healing interventions. She balances boards… and lives!

Next up for Ricochet is her 9th birthday on January 25. She has also been cast as one of the dogs in the upcoming IMAX film, Superpower Dogs. In addition, Ricochet is currently training her new puppy, a golden/lab mix named Encore (Cori). Although it’s not known if Cori will follow in Ricochet’s pawsteps as a surFUR, it’s a given that whatever she does will be in the spirit of pawing it forward!

Ricochet graciously thanks her generous supporters for these crucial donations that make it possible for her to carry out her work, proving what dogs are capable of. 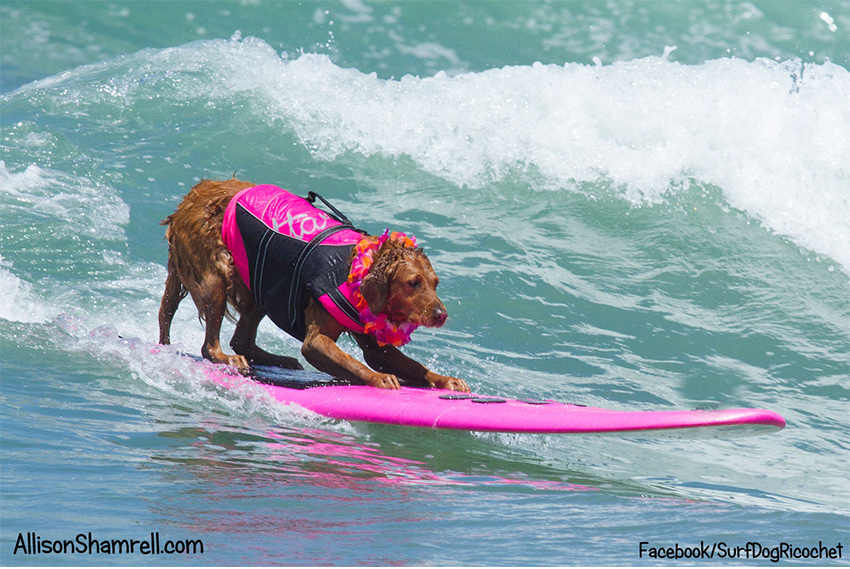 Ricochet is a world famous, award-winning surfing dog who surfs for fun, wins surf dog contests & most importantly… SURFS WITH PURPOSE! She surfs solo, with children, adults, pros, celebrities, other dogs, a goat & even Rob Machado!

She is a certified and registered therapy dog who lives a lifestyle of helping others by pawing it forward while raising funds and awareness for human/animal causes. Her life story is penned in a book called Ricochet: Riding a Wave of Hope with the Dog Who Inspires Millions. Available on Amazon at http://amzn.to/2h42I9g

She has gone from service dog to SURFice dog and back again! She holds the titles of AKC Therapy Dog Distinguished (THDD), American Humane Association Hero Dog, ASPCA Dog of the Year, AKC Award for Canine Excellence, Helen Woodward Animal Center’s Surf Dog Hall of Fame, International Surfing Museums Surf Dog Walk of Fame, San Diego Humane Society Animal Compassion Award, and many more that can be found on her website at http://www.surfdogricochet.com/ 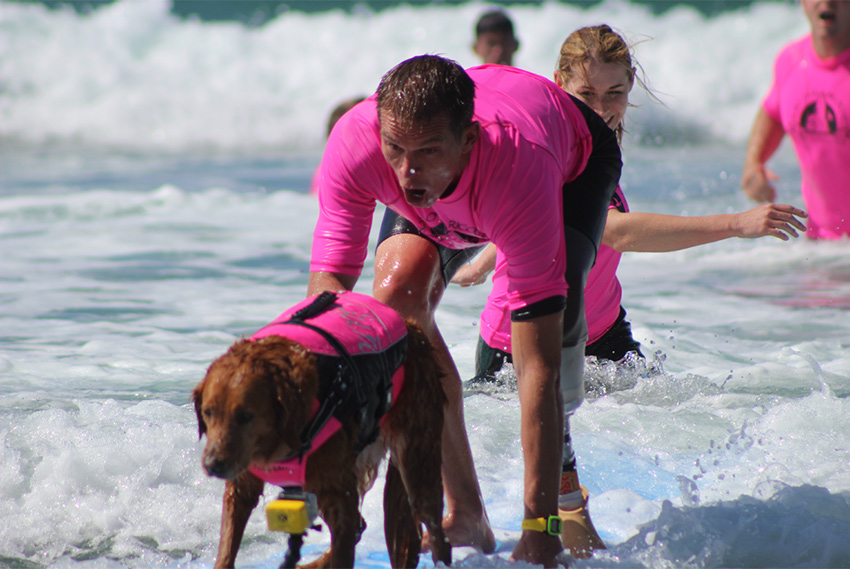