The Journey of Clet the Dolphin

Clet interacting with Dusty off Inisheer, Republic of Ireland, in 2014 (Credit: Cormac Coyne, The Irish Whale and Dolphin Group, 2014).

A solitary bottlenose dolphin, with a distinctive fin first caught the UK media’s attention when he ventured into our Cornish waters in 2014 and has since explored our coasts from as far south and east as Portland, in Dorset, up to the Scottish Highlands.

‘Our’ distinctive bottlenose dolphin was first given the name ‘Nick’ by the inhabitants of the Isles of Scilly off Cornwall, after he first appeared in the Tresco Channel (between the islands of Tresco and Bryher) in 2014. ‘Nick’ was thought to have first been spotted on the mainland before following a lifeboat back to the Isles of Scilly after spending three weeks in Newlyn Harbour, Cornwall. However, it later emerged that the same lone bottlenose dolphin had previously been recorded in France, where he was seen following fishing boats along the Brittany coast in 2008, and had already been given the name ‘Clet’.

Bottlenose dolphins are one of the 11 species of cetaceans (whales, dolphins and porpoises) regularly seen in our UK waters and are characterised by their gun metal grey and stocky bodies. They can be found worldwide in tropical and temperate waters, however here in the UK we have regular sightings, including identifiable individuals, off the east coast of Scotland, around the Isle of Man and in Cardigan Bay, west Wales. The bottlenose dolphins around the UK are some of the largest in the world due to them being present in the northern-most extremes of their range, where the colder waters require them to be larger to keep warm, up to a lengthy four meters. They are well known for being playful and inquisitive and can be often seen riding the bow waves of boats and leaping clear of the water. They eat a wide range of fish species including cod, salmon and herring along with crustaceans and squid using a variety of hunting techniques, sometimes as a group or individually, varying around the world depending on the environment. The dorsal fins along their backs often have scratches, nicks and notches which never heal allowing bottlenose dolphins to be identifiable. This happens to be one of the reasons why this particular dolphin has been so easy to track – he has a big chunk missing out of his dorsal fin which is very distinguishable. Whilst bottlenose dolphins can be seen in pods of over 1000 individuals they can be seen on their own and usually in smaller groups of 6-25 animals. In the majority of sightings, the dolphin in question is seen on his own, however he has been seen interacting with other bottlenose dolphins, humans and boats on his travels.

To put together Clet’s story the Environmental Records Centre for Cornwall and the Isles of Scilly (ERCCIS), hosted by Cornwall Wildlife Trust, has worked with the Sea Watch Foundation to produce a map of his journey. Multiple organisations around the UK, Ireland and the Isle of Man have inputted sightings, photographs and behaviour reports to help track Clet’s movements. As he is one of first dolphins to be tracked across so many regions, this information is very important to help us learn as much as we can about solitary bottlenose dolphins and this unique individual. The longer he is tracked and the more data we can collect goes towards helping us understand his movements and perhaps the reasoning behind his solo adventure. So what do we have so far…

After spending the spring and summer of 2011 on the Brittany Coast off Morgotte, Finistere, Clet headed over to our UK waters. From September 2011 to April 2014 he appeared to spend most of his time along the Cornwall and Devon coastline, even interacting with the Harbour Masters boat in St Mary’s harbour in the Isles of Scilly. During his time in the south west he was observed with another bottlenose dolphin and was regularly seen at various points along the coast seeking interaction with boats. 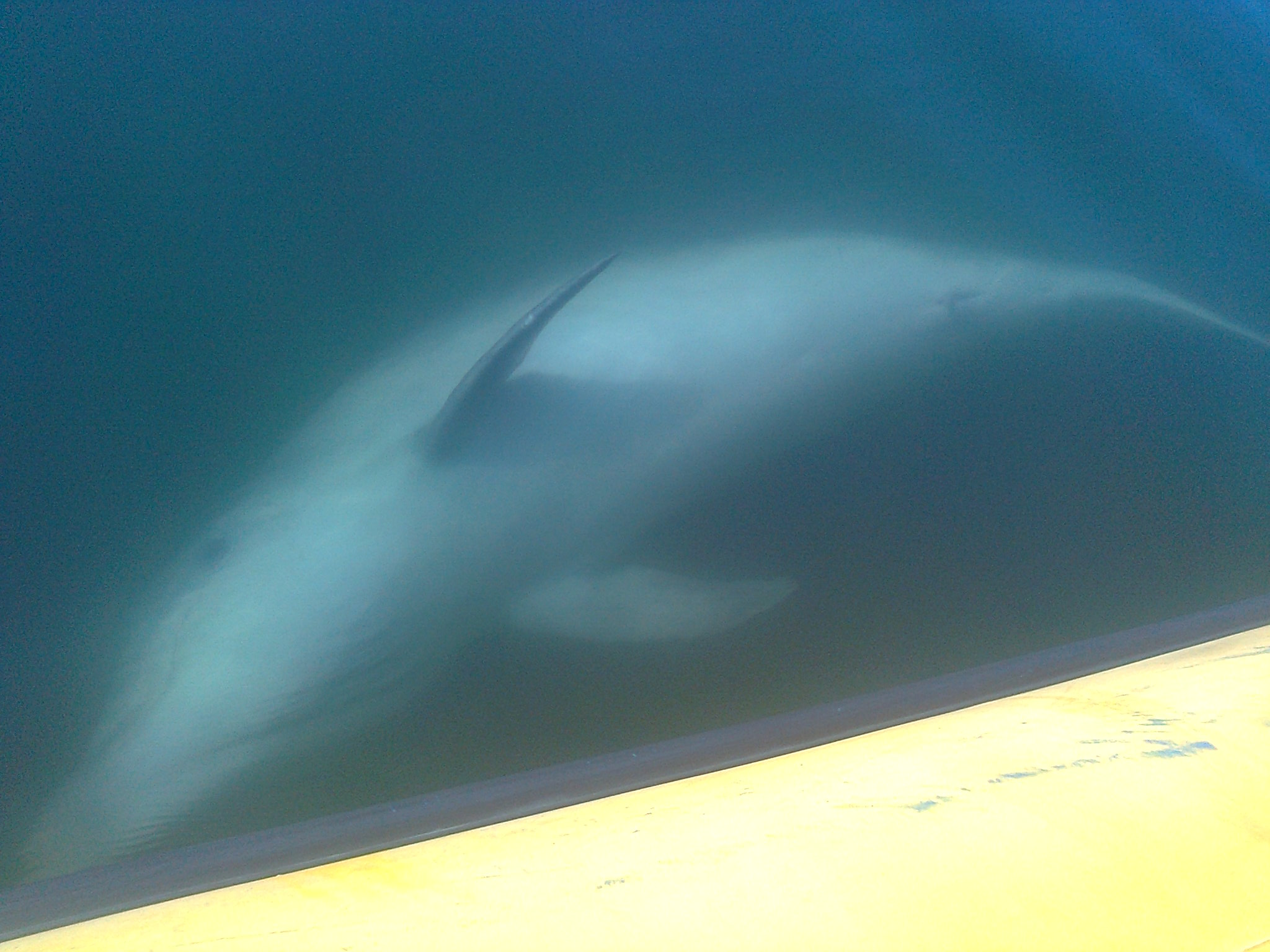 White underside of Clet showing only one genital slit towards the tail end of the animal, compared to the one genital slit and two mammary slits found on a female (Credit: Cornwall Wildlife Trust, 2011).

During the next six months, the Irish Whale and Dolphin Group recorded a total of 20 sightings of Clet off the coast of the Republic of Ireland. He moved from Co. Cork west to Co. Kerry before moving north to Co. Galway, often being seen in the same location for the entire day. On one occasion Clet spent six days off Inisheer, one of the Aran Islands, and was seen interacting with ‘Dusty. Dusty (also known as ‘Sandy’) is a female bottlenose dolphin who has been tracked in the area since 2000 after being first spotted off Co. Clare by a fisherman and has become a popular attraction in the Doolin area.  Whilst travelling along the Irish coastline, Clet dipped into numerous harbours and was even reported as being involved in an incident in Schull Harbour, Co. Cork, where the local triathlon club reported him as being aggressive to swimmers on four occasions. Boats and other cetacean species were not excluded from Clet’s apparently aggressive behaviour as he was observed interacting aggressively with a harbour porpoise by ramming into it and even displayed sexual behaviour towards the underside of a boat. Bottlenose dolphins do have a reputation for being boisterous and attempting to mate with things other than their own species so this is not entirely surprising!

After last being seen in Ireland in October 2014, Scotland was next on Clet’s itinerary as he appeared off Corran, near Fort William on the west coast of Scotland in the December. However his time north was short as he was only sighted another three times around the Highlands across the next couple of days with a final sighting in Glenuig, Lochailort. Once again, Clet was observed practising his favourite past time of interacting with boats as he was witnessed jumping very close and turning his belly against the hull of a creel boat. He was also seen bow-riding the MV Isle of Arran and followed two ferries, including the Lochaline-Fishnish Ferry, back and forth on their crossings.

Clet was next spotted when he dropped by the Isle of Man just before Christmas in 2014 to spend an hour and half casually swimming between boats in Port St Mary Harbour. It seems this may have a been a stop en route back to warmer climes as he once again headed to the South coast of England. 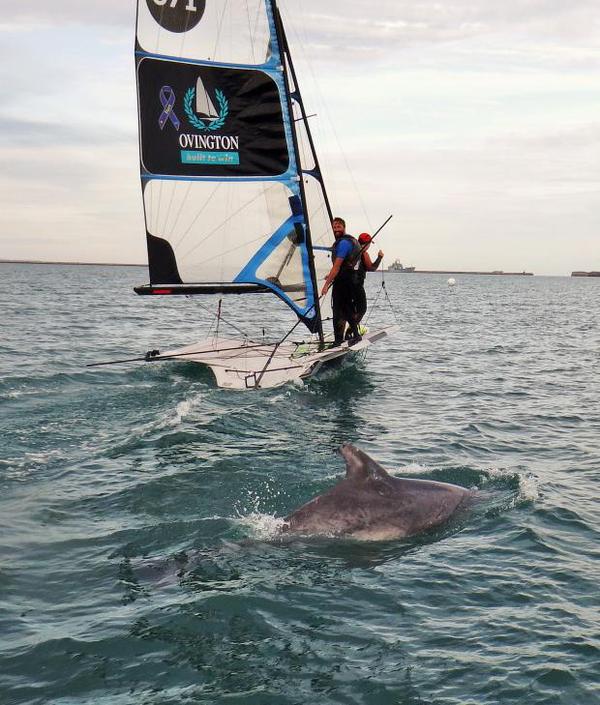 Clet made the news when he was then re-sighted in early February of last year (2015) and proceeded to spend two weeks in the Fowey Estuary, Cornwall. Up until his last confirmed sighting in August, Clet has been sighted another 25 times along the Cornwall and Devon coasts and even as far east as Portland Bill in Dorset, with destinations along the way including Falmouth Harbour and Plymouth. Whilst on his second confirmed tour of the south west, Clet was seen for around a week in Newlyn.

Harbour in March, investigating passing boats and playing with the buoys at the harbour mouth. Clet’s fascination for ferries also continued in the Fowey Estuary as he played with the Bodinnick Ferry by popping up on either side of the boat as it crossed the river and the following day participated in the RNLI Lifeboat training by amusing himself with the lifeboat. This playfulness was observed multiple times in the following days as Clet was observed interacting with dive boats in the Helford Estuary, rigid-inflatable boats (RIBS) during a powerboat session in the River Dart and was recorded wake riding a powerboat off Mylor, Cornwall in early April. After a pit stop swimming around the boats in Fowey Estuary for two weeks in June Clet was seen again on the 24th of the same month. This time he was reported to provide moral support to an open water swimmer off Plymouth Hoe who was training for a Channel swim, even getting as close as six inches alongside the swimmer. After being mistaken for a porpoise in Falmouth Harbour, Clet made his way back, via Fowey Estuary and Plymouth, to Portland in Dorset at which he took a fancy to a shiny metal plate on a pilot boats hull, often spending over five minutes at a time seemingly checking out his reflection. In the next week, Clet followed the pilot boat and numerous RIBs and tugs as they left the harbour. Towards the end of July he returned back to Fowey and Falmouth Bay before being last spotted off Portland at the end of August.

Visit our websites (www.seawatchfoundation.org.uk/clet-the-travelling-bottlenose-dolphin &  http://erccis.org.uk/TrackingClet) to use the interactive map showing where and when Clet has been spotted around the British Isles and Ireland. The map allows you to click on points to display pictures and the comments provided by the relevant organisations and people who submitted Clet’s sighting. The map has been created using ESRI Arc Story Map allowing us to add any future, and any yet to be submitted, Clet sightings to continually build up Clet’s amazing story.

We have received no reports of Clet since the end of the summer 2015 but we don’t want the tale to end here! Have you spotted a dolphin with a distinctive dorsal fin recently? Or do you have data on earlier sightings? Then get in touch! Contact Niki Clear at The Cornwall Wildlife Trust (email: [email protected]) and we’ll update the map with your sighting and any pictures you have to continually monitor Clet’s whereabouts and increase our understanding of his behaviour.