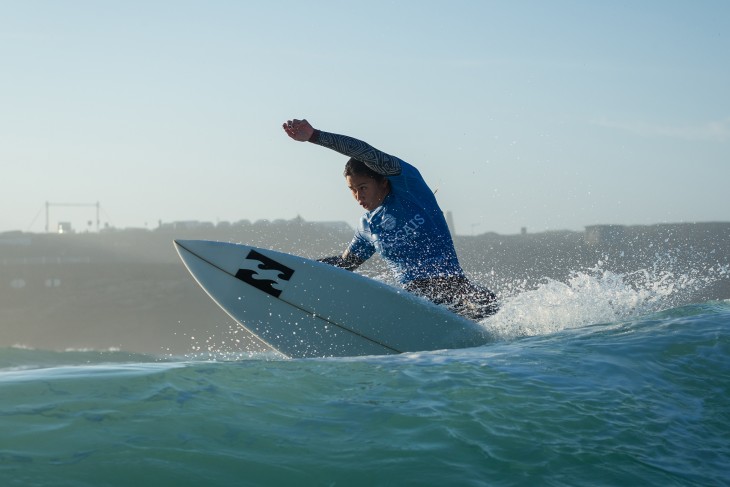 Above: Alessa Quizon of Hawaii winning her Round 1 heat at the Cascais Womens Pro in Portugal on Friday September 25, 2015. Photo: WSL/Poullenot/Aquashot

Stop No. 8 on the 2015 Samsung Galaxy World Surf League (WSL) Championship Tour (CT), the Cascais Women’s Pro, got underway today at the back-up site of Guincho with Rounds 1 and 2 completed in challenging three-to-four foot (1 metre) waves.

The event marks the opening stop on WSL’s European leg and sees the hotly-contested 2015 WSL Title race reignited as well as a battle for requalification for next year’s CT.

This morning’s non-elimination Round 1 saw strong performances from the top three surfers on the Jeep Leaderboard with Carissa Moore (HAW), Courtney Conlogue (USA) and Sally Fitzgibbons (AUS) all posting heat wins to advance directly to Round 3.

Moore, wearing the Jeep Leader Jersey, got the better of Silvana Lima (BRA) and local wildcard Teresa Bonvalot (PRT) to sail through Round 1. A 14.83 heat total secured her place in Round 3 and another step closer to securing a third WSL Title.

“The wind has definitely calmed down a bit so there is opportunity out there to do a few turns,” said Moore. “I’m stoked to be surfing today and make it through that Round 1 heat.”

World No. 2, Conlogue, dominated her Round 1 heat against Nikki Van Dijk (AUS) and Pauline Ado (FRA), with a big, committed turn on a huge wave for an 8.00 and a 15.00 two-wave heat total (out of a possible 20). Despite a strong start Van Dijk was sent to elimination Round 2 where where she defeated Coco Ho (HAW) to advance on to Round 3.

“I watched what the judges were rewarding and really went for it as much as I could on one big turn,” said Conlogue. “Conditions are tough out there so you really have to maximize your opportunities.”

Fitzgibbons, who continues to surf with her head wrapped following a perforated ear drum suffered earlier in the season in Fiji, opened strong in her Round 1 bout, scouring the lineup to maximize what scoring opportunities were out there.

“I couldn’t hear anything during that heat because of all the head gear I was wearing but I kept surfing hard even though I didn’t know the scores,” said Fitzgibbons. “I did move down the beach and surfed it as well I could and it paid off.”

Competition continued with Round 2 and saw more impressive performances from the world’s best. Top seeds Bianca Buitendag (ZAF), Lakey Peterson (USA), Tyler Wright (AUS) and Johanne Defay (REU) all won their heats to avoid elimination advance on in the event.

Defay posted the highest single-wave score of the day, an 8.50, in her Round 2 match-up against Laura Enever (AUS) to claim the win and secure a spot in Round 3. Enever found herself lost in the difficult lineup and is eliminated in equal 13th place while the current World No. 7 moves on.

“It’s really important to have a friend on tour to help and it’s so good to have Bianca Buitendag to support me,” said Defay. “I don’t know how I pulled off that 8.50 ride. It just came off even though it’s hard to find anything out there. I’m just so glad I made it through.”

Buitendag and Bonvalot battled in Round 2 Heat 3. The goofyfooters went head-to-head, fighting to stay in the contest. Buitendag looked in rhythm and opened strong with a 6.83. She went on to back it up with another 6-point ride to build a 13.00 two-wave heat total. Bonvalot was left chasing an excellent 8.60, couldn’t find the score and is sent home in 13th place from her third CT event.

“I don’t know about the world title but my goal this year is to make the top 5,” said Buitendag. “I’m so happy to make it through Round 2, it’s very nerve-wracking, and that heat was tough and could’ve gone either way.” 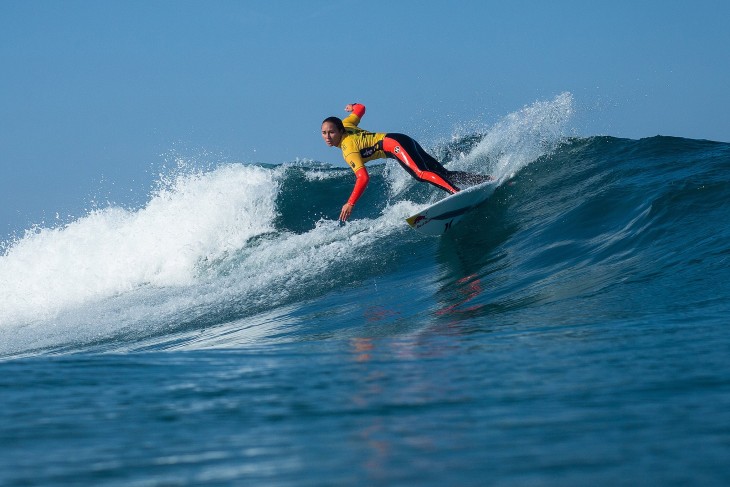 Above: Carissa Moore of Oahu, Hawaii (pictured) winning her Round 1 heat at the Cascais Womens Pro. Photo: WSL/Poullenot/Aquashot

Peterson applied the pressure early against injury wildcard Pauline Ado (FRA) and got to work quickly. With half the heat gone Ado was yet to post a score while Peterson had a 10.67 heat total. Ado managed to build a 7.50 heat total of her own but it wasn’t enough and she is eliminated from the competition while Peterson moves on to Round 3.

“It what so hard out there and the ocean was really pulsing,” said Peterson. “I got the first wave of the heat, which definitely helps. It’s really hard to surf out there and I felt like I was paddling for most of the time.”

Wright delivered an impressive display in her Round 2 heat against Sage Erickson (USA). Wright, the current World No. 6, overcame the challenging surf and put Erickson in a combination situation with a 16.10 heat total, the best of the day. Erickson, who is currently leading the WSL Qualifying Series rankings, has secured her place on next year’s elite tour but leaves Portugal in equal 13th place.

“That was really hard work out there,” said Wright. “I am absolutely exhausted after that. There’s so much water moving out there so there isn’t a predictable section, which is what makes it tough. You have to be adaptive and ready to react to what the wave has to offer.”

The Cascais Women’s Pro is webcast LIVE via WorldSurfLeauge.com and via the WSL mobile app.

“Great conditions on offer this morning at Guincho,” said WSL Deputy Commissioner, Jessi Miley-Dyer. “We’ll monitor the surfing throughout the day, but we’ve placed Rounds 2 and 3 aon standby in order to take full advantage of the surf available today.”

Surfline, official forecasters for the World Surf League (WSL), are calling for:

Rising but more NW directed swell due to fill in Friday. Continuing but easing NW swell is on tap for Saturday with smaller residual swell Sunday. This swell will be biggest for Guincho with only minor amounts of swell wrap expected for Carcavelos. Only small/minor windswell/swell is expected for the final day of the waiting period. Tropical Storm Ida is not expected to have any impacts during the waiting period. 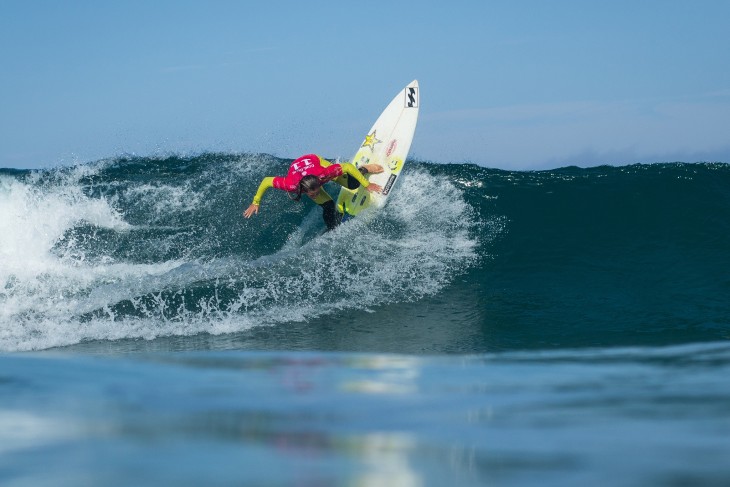 Above: Courtney Conlogue of the USA (pictured) dominated her Round 1 heat with a near perfect 8.00 point ride (out of ten) to advance into Round 3 of the Cascais Womens Pro. Photo: WSL/Poullenot/Aquashot