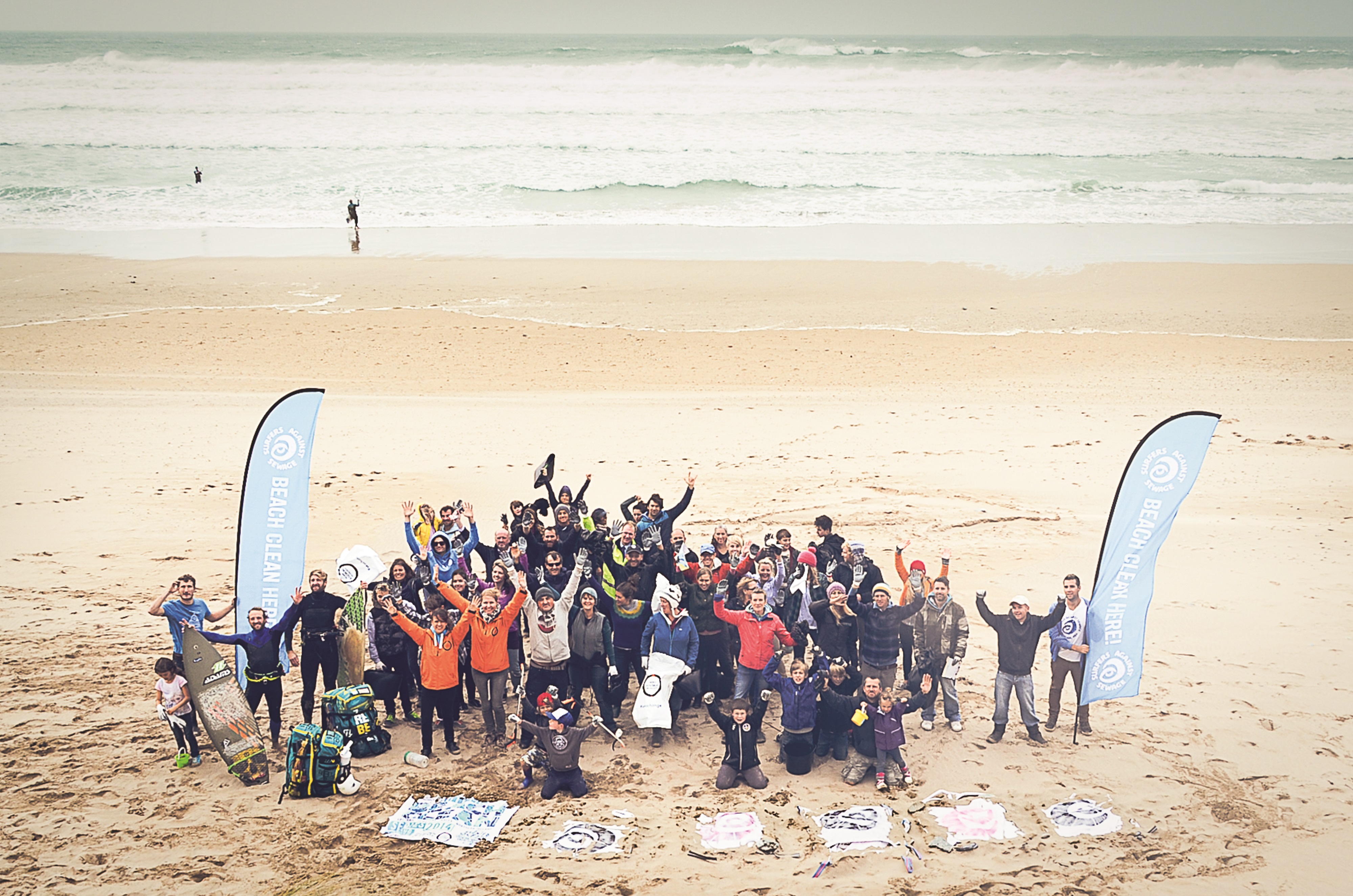 Surfers Against Sewage (SAS) are calling for 150 people, community groups, schools and local businesses in coastal communities across the UK to volunteer to run their own beach cleans during the week of the 2nd – 8th of November. These incredible ‘Autumn Beach Clean Series Lead Volunteers’ give their community the opportunity to take collective action to protect their favourite beaches and become part of the growing, nationwide call for dramatic action to halt the marine litter crisis.

This is the most ambitious Autumn Beach Clean Series so far, as SAS commit to recruiting 3500 volunteers to join them in removing over 15 TONNES of marine litter from 150 beaches across the UK coastline from the 2nd – 8th of November.

Already over 70 Lead Volunteers from previous years have registered their beaches. However with almost 2,000 UK beaches to choose from and a shocking 3,000+ items of litter per mile of our coastline there’s plenty of room! To register your Autumn Beach Clean, or if you’d just like more information on what becoming a Lead Volunteer entails, contact the SAS Beach Clean Team at[email protected] or on 01872 555942.

Surfers Against Sewage are delighted to be working with The Crown Estate for the 5th consecutive year as the Autumn Beach Clean Series plays a vital role in addressing this marine litter crisis by uniting and inspiring coastal communities to take action to protect their beaches. Our coastal towns and villages often face an economic struggle through the long winter months as commercial beach cleaning activities halt almost as soon as the last tourist leaves. Sadly this means that each autumn UK beach lovers are forced to brace themselves for the inevitable mass accumulation of marine litter!

Litter can be found on every beach in the world, even those on remote and uninhabited islands and the vast majority is plastic. 8 million tonnes of plastic are dumped in the ocean every year – that’s the equivalent of 15 carrier bags of plastic for every metre of coastline around the globe (1), this means that there are now a staggering 5.25 trillion pieces of plastic debris in our oceans (2). On UK beaches, since the first survey over 20 years ago (1994), plastic litter has increased by 180% (3). Sometimes taking 100’s of years to break down this tideline of trash is not only a costly eyesore, ocean plastics are responsible for the deaths over 100,000 marine mammals and turtles and 1 million sea birds each year through ingestion and entanglement, in fact the vast majority of marine animal species, from plankton to killer whales, have been found to ingest plastic (4).

Shocking stats like these make it abundantly clear that the marine litter crisis can’t be solved by beach cleans alone. We need to stem the flow of plastics to our oceans by closing the loop on litter (5) and working towards a circular economy*, one that begins with seeing the plastics that are already in our oceans as a resource rather than simply WASTE. That is why circular economy messaging and a commitment to recycle all suitable materials* (plastic bottles, cans, ghost gear [lost or discarded fishing nets, pots and traps] etc) removed from the 150 beaches will be at the very heart of the Autumn Beach Clean Series.

Surfers Against Sewage are also delighted to welcome new Autumn Beach Clean Series lead sponsors Selfridges Project Ocean 2015, which sets out to raise awareness of the harm plastic causes to our oceans. Earlier this year Selfridges famously removed all single-use plastic water bottles from their Food halls and restaurants, amounting to approximately 400,000 bottles a year. Especially important as currently 13 billion plastic water bottles are used in the UK each year but only 23% are recycled. The remaining 10 billion bottles go to landfill or find their way into the environment (1).

Moving forward the Surfers Against Sewage Marine Litter Report, 2014 – 2020 Vision identifies the true scale of the environmental, social and economic impacts the marine litter crisis is having on the UK. The report features an array of circular economy solutions, detailing the role that industry, government and individuals must play to tackle this issue and sets the ambitious target of a 50% reduction in UK beach litter by 2020 (4).

The marine litter crisis is often overwhelming but you can make a difference. Get in touch with SAS and volunteer to run an Autumn Beach Clean at your favourite beach today to play your part! To register your beach contact [email protected] or call 01872 555942.

Dom Ferris, Surfers Against Sewage Projects Manager says: “In the past 18 months over 17,000 people have volunteered for SAS to clean our beaches. This incredible ‘volunteer army’ is committed tackling the marine litter crisis for as long as it takes but we always need more help. We hope to welcome thousands of new ‘recruits’ for the Autumn Beach Clean Series please get in touch and register your favourite beach today!”

Gary Thompson, Coastal Manager from the Crown Estate says: “We are delighted to support Surfers Against Sewage in their efforts to mobilise UK coastal communities in protecting beaches and coastal habitats from the threat of marine litter. After 5 years working together we know that these events provide individuals with opportunity to play a part in protecting their favourite beaches, but also to gain a lasting understanding of how The Crown Estate is working to deliver a sustainable future for UK coastlines and coastal communities.”

Daniella Vega of Selfridges Project Ocean says: “2015 sees Project Ocean focus on highlighting the threat that single use plastics pose to our ocean, encouraging everyone to reduce, reuse and recycle plastics. We’re delighted to work with Surfers Against Sewage on the Autumn Beach Clean Series. The very fact that 3500 people from coastal communities will head to their beaches this November is a shining example of what can be achieved if we work together against the threat of ocean plastics” 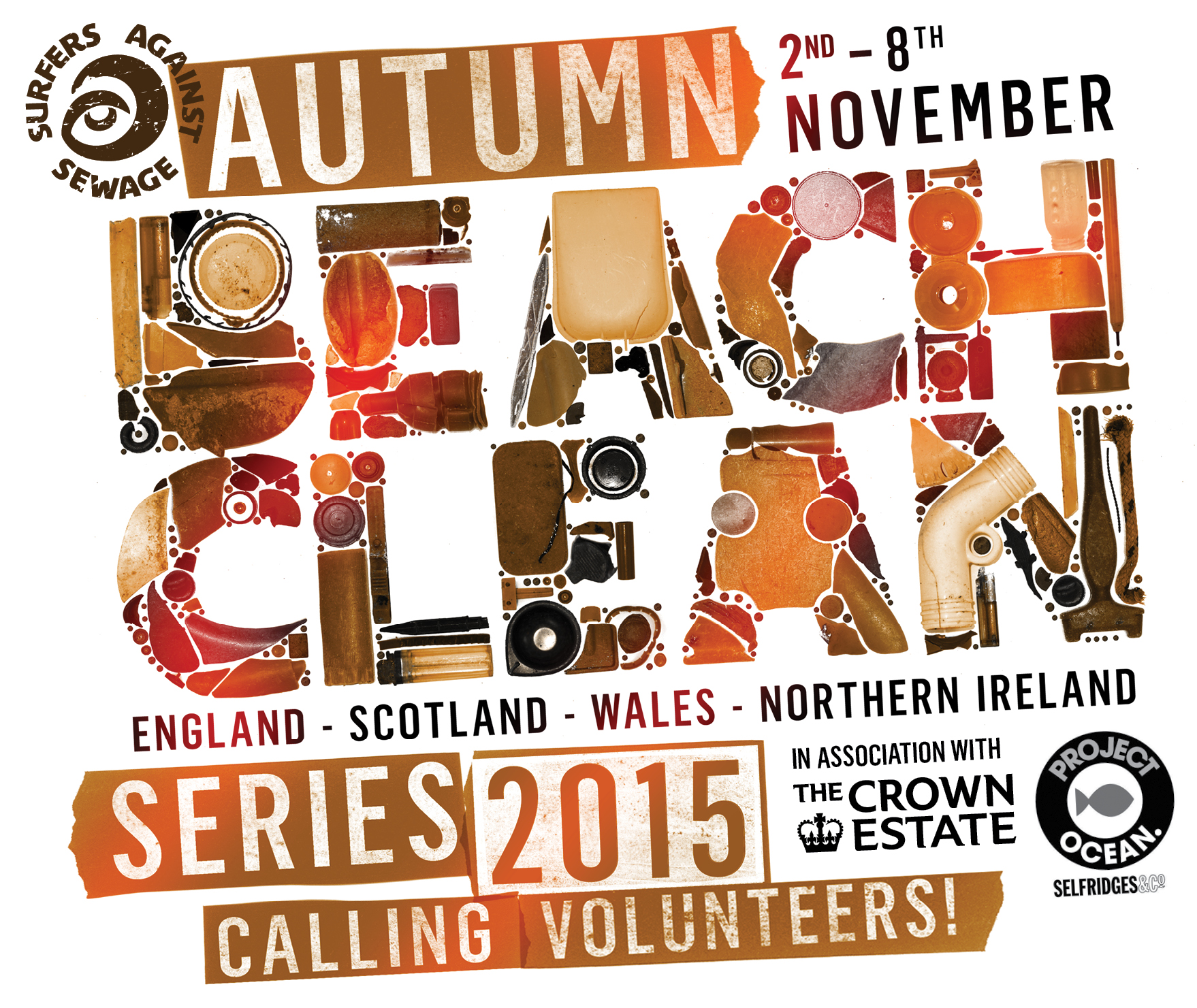 Surfers Against Sewage (SAS) is an environmental charity protecting the UK’s oceans, waves, beaches and wildlife for all to enjoy safely and sustainably, via community action, campaigning, volunteering, conservation, education and scientific research.