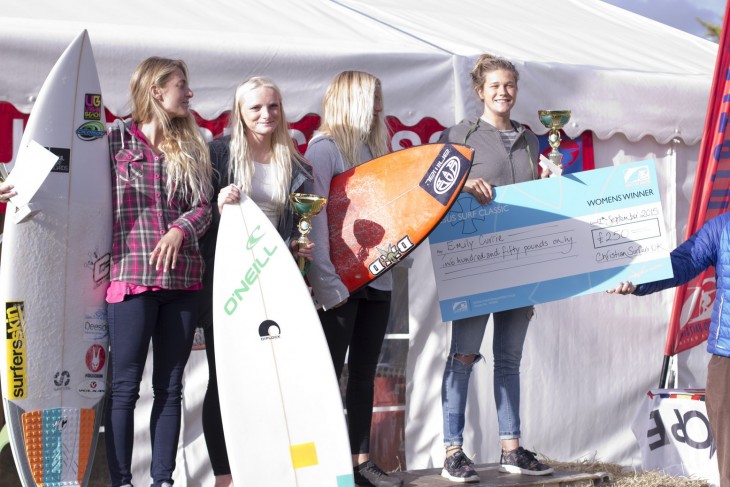 Surf predictions for this year’s 23rd Jesus Surf Classic it’s fair to say were pretty changeable, ranging from big and onshore to flat, so organisers had their work cut out making the correct timely calls. However as ever the Christian Surfers team pray into guidance for these events and felt the right decision was to call the event on, during the weekend September 12th & 13th.
This year demand to enter was unprecedented, with over 150 surfers applying, which meant sadly some had to be disappointed, but the team were able to accommodate 140 competitors in the eight categories.
This event is now one of the most established in the UK, occupying its early September slot, and is supported by a fantastic team of up to 100 Christian Surfers helpers from around the country, and supplemented by local church volunteers
On Saturday by 8.00am check in time, all was set for what we hoped would be a great day of Surf and Skateboard action centred around the Parkdean car park (North end of Croyde). Loads of frothing Groms, and enthusiastic competitors gathered, but the weather was not the best with driving rain until around 11am, when skies cleared, the sun shone, and the contest was well underway. 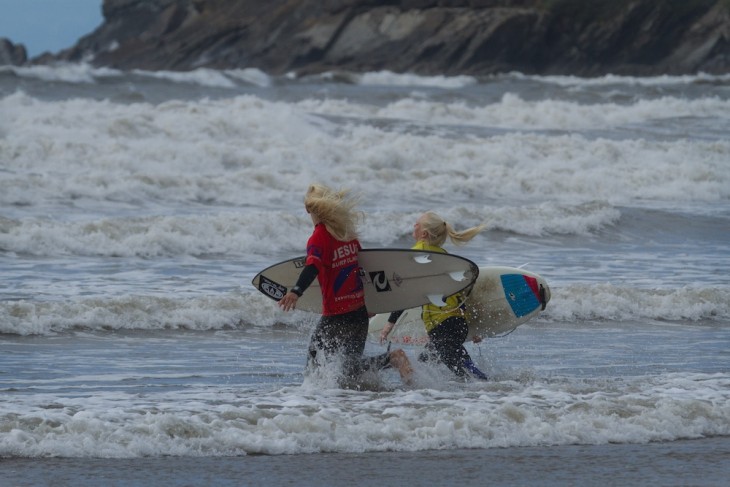 Above: Although Croyde wasn’t looking it’s best but the girls put on a great performance in the onshore conditions. Photo Roy Harley
Surf on the Saturday was predicted to be onshore in the 3ft – 5ft range, so the majority of focus for day one was to complete the ‘Open’ division in both Men’s and Women’s category, as well as the over 35’s ‘Masters’.
With such a huge field however and 62 heats to get through, earlier rounds of many of the other categories were also run.
Once the sun shone, action on the ‘pop up’ skatepark began, with over 40 entered into the Big Move comp. The standard of skateboarding was fantastic, and the Christian Skaters team, ran a really professional and fun event.
Back in the water, the twin peak heats had been completed, and as the swell and tide pushed in there was some top surfing throughout the afternoon. After a long but very enjoyable day, the presentations took place at 5.30pm.
First award was a memorial trophy to remember Phil Pechonis who passed away last July, it was presented this year to the Knight family, who have inspired many. Taz and Peony with their travel experiences and contest results, whilst Matt & Susannah work tirelessly behind the scenes in the surf industry, for Surfing GB, Croyde Surf Club and other events – Phil would have definitely approved, as his wife Megan did !!

The keenly contested Masters division was won by Bude’s Paul Kirby, ahead of Wales ‘new boy’ to the event Rudi Perrins-Davies.
The Women’s Open was very keenly competitive with a strong field battling through tough conditions to win the title and an increased amount of prize money of £250. Emily Currie surfed strongly throughout and took the title, ahead of Ellie Turner (14 years old) who was competing in three categories and surfed superbly. Local surfer and Boardmasters winner Peony Knight was third and Portsmouth Tehillah McGuiness 4th. 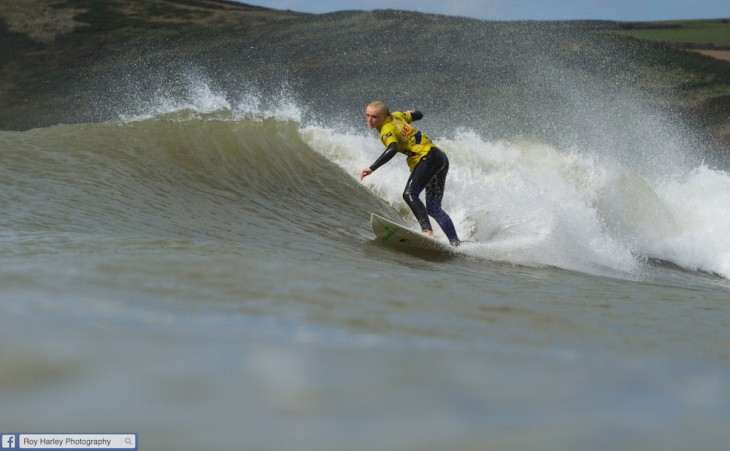 Above: Peony in action. Photo Roy Harley
Day One ended, with lots of smiling faces, tired limbs, and all the younger competitors frothing for Sunday.
Weather patterns had improved for Sunday so the skatepark remained an area of intense activity, but for the first time the 24 groms (U12’s) had the opportunity to compete. Still a full day head, with light winds and smaller cleaner waves.
After a further 29 hotly contested heats new champions were crowned in five divisions. Some of the key winners included Emily Currie making it a double win taking the Women’s Junior (U18) title, Stanley Norman, winning yet another final in the U12’s. 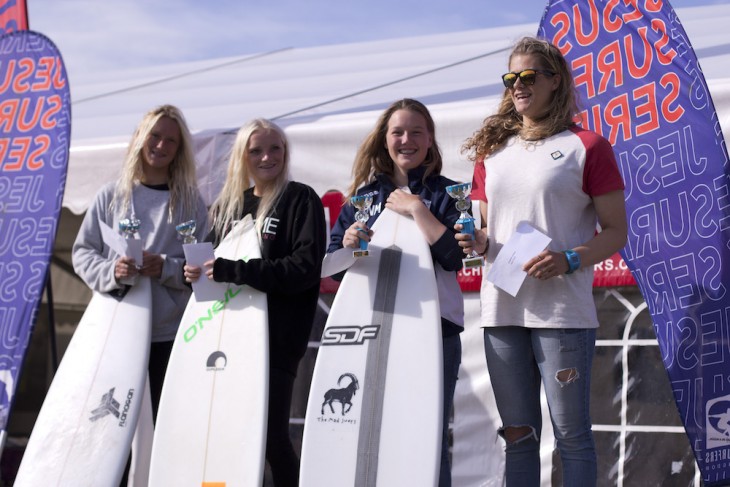 Above: Presentation for the U18, Niamh Mathias, Peony Knight, Ellie Turner and winner of £250 prize money, Emily Curry. Photo Christian Surfers UK
Launceston’s Barnaby Cox also had a fantastic event, winning both the U14, and U16 title.
The final final saw Max Payne and the rest of the U18’s finalists ripping to bits the slightly ragged cross offshore 3ft waves. Max though taking the title ahead of Will Bailey who landed a big air just 30 seconds after the final hooter was sounded.
All in all a hugely enjoyable weekend, 62 heats run, over £2000 of prize money given out, and competitors and supporters well fed with fresh Pizza, Crepe, fresh cakes and of course the BBQ.
A huge thanks to RNLI, Parkdene, Christian Surfers, Hotdoggers for use of the judging vehicle, Christian Skaters, St John Ambulance, and so many of the local community and church members for supporting this event, and of course God for providing waves, sunshine and keeping everyone safe. Next year’s event has been pencilled in for the weekend of September 10th & 11th 2016 – Don’t miss out.
Meanwhile Christian Surfers next event as part of the Jesus Surf Series moves to Polzeath for the Jesus Longboard Classic on October 17th & 18th. Entries will soon be open via www.christiansurfers.co.uk/register
To view more pictures from the event, go to the Christian Surfers UK Facebook page, or log onto www.christiansurfers.co.uk where you will also find more information about the organisation. There is also a great little edit of Saturday’s action via the link below, thanks to Peter Pickford