The Swatch Women’s Pro Final saw Moore take on Buitendag. Each of the surfers opened big – Moore with an 8.00 and Buitendag with a 7.67. The South African delivered big, powerful turns in the pocket but, with nearly half the heat gone, did not have a backup score, leaving in Moore in first place. The middle of the heat saw an exciting exchange and the Hawaiian was rewarded with an 8.37 to advance her lead. She kept the pressure on until the heat’s end and claimed victory. Final scores were 16.37 for Moore (8.37 and 8.00) and 13.84 for Buitendag (7.67 and 6.17).

“This is such a sweet win for me and I’m so, so stoked,” said Moore. “That was a really tough Final against Bianca and I’m just so happy to make it through. I love this wave — it’s my happy place. It’s always so special for me to be here because I grew up competing at Lower Trestles. It’s just so awesome to come here on the women’s tour so big thanks to everyone for making that happen.”

“That heat with Tyler in the Quarterfinals was really special and very emotional,” continued Moore. “I had a tough time at this event last year so to make it through that heat really meant a lot. Tyler surfs so amazing and she really pushes me to be my best. We’re really missing Steph Gilmore on tour this year and we can’t wait to see her back and healthy. Courtney Conlogue is surfing so well at the moment so it’s shaping up to be a really exciting end of the year.” 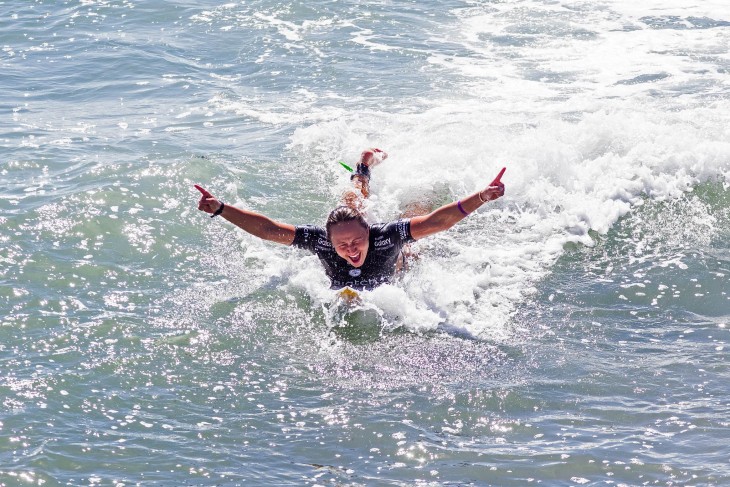 Buitendag has had a series of great results this season and remains at No. 4 on the Jeep Leaderboard after today’s runner-up finish, her third of the year.

“I’m blessed to be making Finals this year,” said Buitendag. “I’m making the most of the opportunities I have and it seems to be working out. I feel really comfortable on my backhand and I thought it was about time I started trying some new things. I’m taking it one day at a time and today was definitely a good day.” 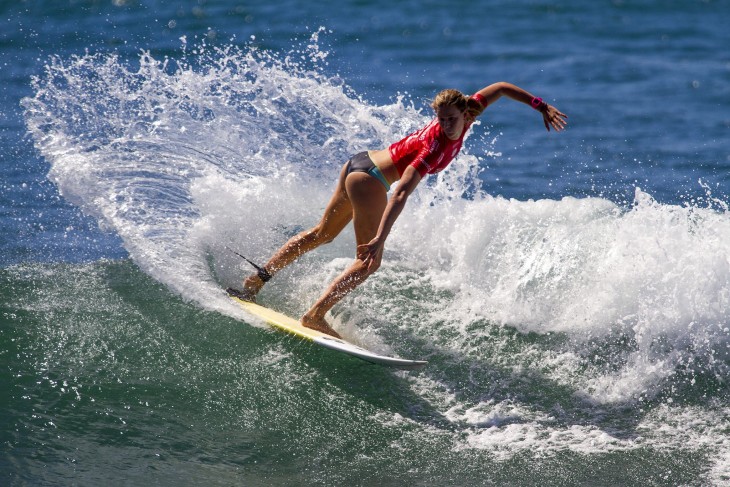 De Souza previously went head-to-head with event standout Filipe Toledo (BRA) in an all-Brazilian Semifinal. A passionate De Souza stamped his authority on the heat with an excellent 8.33 but Toledo closed the gap with an 8-point ride of his own. The pair each took a wave in the final seconds but Toledo didn’t get the score required and goes home in third place, moving up on place to No. 3 on the Jeep Leaderboard.

“I think that was a really close heat,” said Toledo. “I knew Adriano would be a really tough guy to beat because he’s got a lot of confidence at the moment. I’m stoked with the result and now I’m focusing on France.”

Fanning dispatched reigning WSL Champion Gabriel Medina (BRA) in the second Semifinal. Medina’s pair of 8-point rides couldn’t match Fanning’s impressive 18.17 heat total. Today’s result for Medina is his best ever at Lower Trestles and he moves up from 10th to 7th place on the Jeep Leaderboard.

Buitendag got the better of Lakey Peterson (USA) in the opening Semifinal of the Swatch Women’s Pro with two mid-range scores. Peterson has been in impressive form throughout the contest and previously upset Courtney Conlogue (USA) in the Quarterfinals. Today’s third-place finish sees her solidify her Top 5 placing on the Jeep Leaderboard.

“I can’t blame anyone but myself,” said Peterson. “I made a lot of mistakes at the start of the event I think. I got one good wave and was feeling confident but then it went really quiet. I’m really disappointed in myself and the situation but I’m trying to look at the positive.”

Moore took out Dimity Stoyle (AUS) in the second Semifinal with a 14.27 heat total. This result turns around a disappointing year for Stoyle and today was her first Semifinal berth of the season and her second ever on the CT. She moves from 16th on the Jeep Leaderboard to 14th but the young Australian will need to find three more solid results at the remaining events in order to requalify for the 2016 CT.

“I’m so thankful, I’ve had so many people helping me out,” said Stoyle. “I feel like I’ve finally had a chance to show what I can do. I’m a little bit disappointed in the last heat because I really want to get some good waves. I’ve been working hard over the last few months and I feel like it’s really starting to pay off now.”

The WSL Heritage Series, which is designed to celebrate and honor the icons of the sport, ran the first ever Women’s Heat today with surfing legends and World Champions Lisa Andersen and Sofia Mulanovich in a historic battle. Both surfers put on a show but it was Andersen, four-time World Champion, that had the edge over 2004 World Champion, Mulanovich, with her classic style and won the heat 14.70 to 12.60.

“The Swatch Women’s Pro finalists are amazing and what a great World Title race it’s shaping up to be,” Andersen said. “It’s wonderful to see all the women getting really competitive towards the back half of the year. They’re just so inspiring.”

“You really need to pick your the right waves out there,” said Mulanovich. “Carissa and Bianca are really going wave for wave and it’s wonderful to watch.”

Highlights from the Hurley Pro and Swatch Women’s Pro are available at WorldSurfLeauge.com and via the WSL mobile app.

The next stop on the 2015 Samsung Galaxy WSL Women’s Championship Tour is the Cascais Women’s Pro, which gets underway on September 22.