“As transformed through the unique language of her chosen 19th-century medium, Sternbach’s contemporary surfers become quasi-mythic figures…Situated in a space of longing for freedom and escape, Sternbach’s subjects might serve as our heroic surrogates. Standing on the edge of civilization, by the promise of water, these surfers remind us of both the beauty and fragility of our ongoing relationship with the natural world.”
–April M. Watson

Over the past decade, Joni Sternbach, a fine art photographer living in Brooklyn, NY has traveled around the world to create one-of-a-kind tintype portraits of contemporary surfers using the nineteenth-century wet-plate collodion process with a large-format camera. In her stunning new monograph Surf Site Tin Type just published by Damiani Editore, Sternbach gathers the worldwide surfer community together in a series of fascinating portraits that celebrate surfing as a sport and way of life.

Evoking our ancient ties to the ocean and the bold individualism of the men and women who live to ride the waves, Sternbach’s dramatic images capture surfers of different ages and cultures with their iconic boards, in prized beach locations. From Montauk and Malibu in the United States, to Byron Bay in Australia and Cornwall in England, Surf Site Tin Type brings us surfing legends, current stars and local practitioners portrayed in exquisitely detailed images. They are at home in and part of their surroundings–the waters of our primordial origins.

In 2006 Sternbach hurried to set up her 8 x 10 camera on a bluff overlooking the beach in Montauk, Long Island. Hoping to capture a dramatic sky, she noticed a distant group of surfers in the water. Hearing their collective cheer as the clouds parted and a shaft of sunlight shone onto the water, Sternbach directed her camera toward them to record their bond with the natural world. From that moment Sternbach has transported her large-format camera and black-box darkroom to surf beaches, hand-pouring photo chemicals onto plates that are prepared and developed minutes after portraits are made.

Many surfers portrayed in Surf Site Tin Type have become environmental advocates, after witnessing degradation of the ocean close at hand. Dave Rastovich (above), clear-eyed in a swirl of dappled light, is an iconic example. A “free surfer” who no longer competes, Rastovich embarked on a five-year quest with his friends to protect dolphins, whales and the ocean they all share, that was documented in the award-winning 2011 film, Minds in the Water. 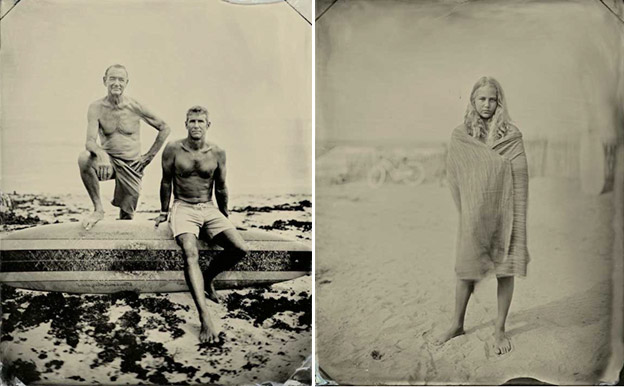 Robert August, renowned surfboard shaper and Robert “Wingnut” Weaver (pictured above) are both surfing legends as the subjects of the groundbreaking documentary surf films by Bruce Brown, Endless Summer, 1966 and Endless Summer II, 1994. Leaning on an appendage-like board etched with abstract marks from salt and sand, August and Weaver pose in bright sun as timeless embodiments of surfing. In Sternbach’s arresting tintype portrait of Lily Ives (above), her face is finely detailed, while slight movement of her hair and her folded beach wrap blend with umber sand and sky.

As with surfing, Sternbach’s work is unique and performative. Her studio is the beach; her exposed tintype plates processed in a chemical “fixer” bath in daylight for all to see. Like individual wave rides, each of her images is enhanced by varying and unpredictable conditions, such as her application of the collodion emulsion, or the level of light, temperature and humidity.

The Malloy brothers, Chris, Keith and Dan from Ojai, CA, are well-respected and professional surfers, filmmakers and environmentalists. Photographed with an unusual outrigger canoe that they use for wave riding, the Malloys might look like voyagers from the past, but are quite contemporary. They are ambassadors for the surf brand, Patagonia and have a hand in designing environmental wetsuits, apparel and accessories.

Surfers may be among our last remaining heroes–a special community of people who are fearless, skilled, and at home in the natural world. While placing them within it, Joni Sternbach elevates her subjects beyond our contemporary world, so we may see them beckon to us with their gaze, imagining where they might go and what freedom and thrills they may experience along the way.

Joni Sternbach uses early photographic processes to create contemporary portraits and environmental landscapes. Her long-term projects involve the pursuit and understanding of the western landscape and the series SurfLand, which captures portraits of surfers in tintype. Sternbach’s first monograph, SurfLand, was also a solo exhibition, at the Peabody Essex Museum in Salem, Massachusetts in May 2009. SurfLand traveled to Blue Sky Gallery and the Southeast Museum of Photography. In 2012, Surfland Revisited, 2006-2011 opened to acclaim at Rick Wester Fine Art in New York City.

Sternbach was a 2013 artist-in-residence at the Ucross foundation in Wyoming and the initial Art Park/Atlantic artist-in residence for their residency program in 2011 in Byron Bay, Australia. She is the recipient of many grants including NYFA and CAPS and the 2011 Clarence John Laughlin and 2010 Santo Foundation awards. Sternbach’s work has been included in many group exhibitions, including the groundbreaking photographic exhibition, Pleasures and Terrors of Domestic Comfort, organized by Peter Galassi at the Museum of Modern Art. Sternbach’s work is in many public collections. A partial list includes the National Portrait Gallery, London; Nelson-Atkins Museum, Kansas City; Museum of Photographic Arts, San Diego; San Francisco Museum of Art; Maison Européenne de la Photographie in Paris, France; Saint Louis Art Museum and Museum of Fine Arts, Houston.

Joni Sternbach was born in the Bronx, New York. She graduated from New York University/International Center of Photography (ICP) with an M.A. in Photography in 1987. She is currently a visiting artist at Cooper Union and a faculty member at both ICP and Penumbra Foundation all in New York City where she teaches wet-plate collodion.

For more about the artist go here www.jonisternbach.com 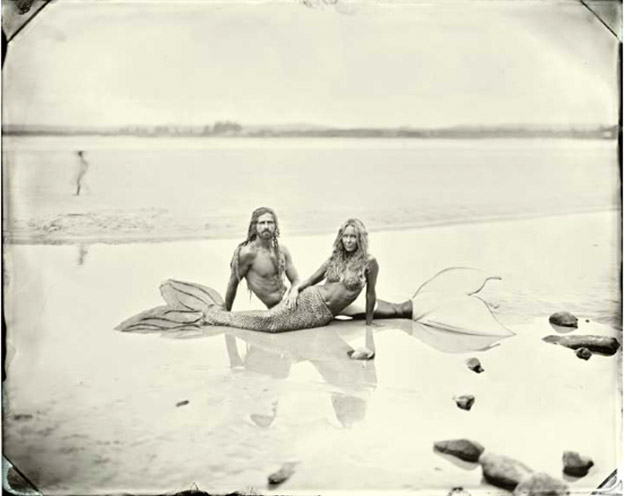 All images are © Joni Sternbach