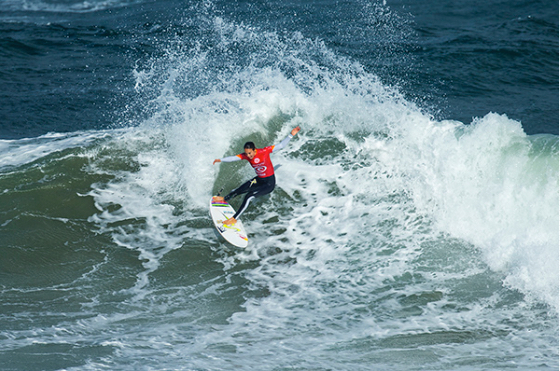 Two-time Rip Curl Pro Bells Beach winner Sally Fitzgibbons (AUS) was the standout of the day in Heat 2 of Women’s Round 1. Fitzgibbons came back strong from a disappointing result on the Gold Coast at the hands of opponent Silvana Lima (BRA), her worst CT finish since 2009, by posting the highest two-wave heat total of the competition so far, a near-perfect 18.37. Lima, 2009 Bells winner, didn’t go down easily and delivered the first Perfect 10 of the contest and her second of the year. Despite a strong showing from the Brazilian she will join Victorian Nikki Van Dijk (AUS) in elimination Round 2.

“The result on the Gold Coast was a little bit unfortunate,” Fitzgibbons said. “I lost to Silvana in Round 4 which was a little bit earlier than I would have liked. I feel like my surfing is in a really good place. I feel strong and confident and I just have to keep on that same track, have fun with it and enjoy my time here at Bells now”.

Defending back-to-back Bells champion, Carissa Moore (HAW), had her opponents in a combination situation by the halfway mark with two scores in the excellent range (8.00 and above). Dimity Stoyle (AUS) and trials winner Pauline Ado (FRA) were left trailing. The world no. 1 looked untouchable and storms through to Round 3 while Stoyle and Ado will fight to avoid elimination in Round 2.

“Before the heat I was looking at it from the beach thinking it looked pretty tricky,” Moore said. “When I got out there I just tried to simplify things and luckily found a couple and had such a blast”.

Reigning six-time WSL Champion Stephanie Gilmore (AUS) started off slow in her first heat at the Rip Curl Pro Bells Beach today. 2015 Rookie Tatiana Weston-Webb (HAW) came out strong with a 7.10 putting the pressure on Gilmore and Alessa Quizon (HAW). Gilmore bounced back and showed why she’s a former three-time event champion posting an 8.43 and a 7.07 to steal the win and spot in Round 3.
“I really only caught two waves, which I guess is really all you need in a heat,” Gilmore said. “You really had to be patient out there and stay productive, it was a difficult heat. It’s been awhile since I’ve rung the bell. It’s a very prestigious trophy so I would love to do it again, it will be hard but I will try my best”.