The Roxy Pro Final saw Carissa Moore (HAW) battle Stephanie Gilmore (AUS) in an epic clash. Moore looked composed and stylish, claiming a win at the first event of the season, taking the yellow jersey from her opponent and defeating the reigning six-time WSL Champion on her home turf. Moore didn’t drop a heat in the competition, winning through each Round on her way to the Final. Today was the 20th CT match-up for the pair and Moore’s win evens the score with 10 victories apiece. The win today is Moore’s 14th on the CT and her second victory on the Gold Coast, having previously won the event in 2011 on the way to her first World Title. 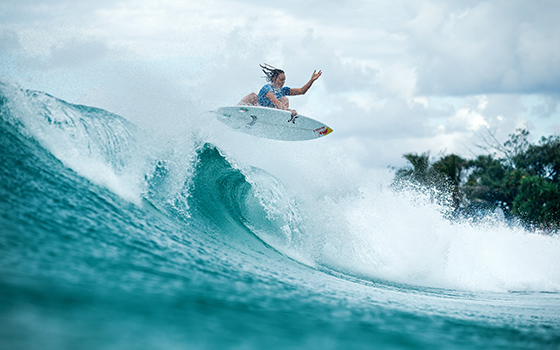 Carissa Moore put on a clinic at Snapper Rocks to claim victory over Stephanie Gilmore at the Roxy Pro. Photo WSL/Kelly Cestari

Gilmore got to work early in the Final, maintaining her down-the-line flow for a solid opening score, an 8.33, but it was Moore’s day. The Hawaiian answered back with an unbelievable display, looking perfectly in sync with the wave to take an excellent 9.40. Moore was patient, holding priority and waiting until there were just seven minutes remaining to take her next ride. Moore put together a well-constructed wave earning another nine-point ride for a variety of powerful maneuvers, including a smooth roundhouse cutback, to leave Gilmore in a combination situation that she couldn’t escape. Moore put on a display of crowd-pleasing moves at the end of the heat in celebration of her victory, boasting an 18.43 heat total, the highest of the Roxy Pro.

“It’s amazing! The crowds are incredible today! I’ve never been welcomed by such loud and cheering enthusiasm, to have so many people share it in that moment with you is the raddest feeling,” said Moore. “It definitely feels good to win. Steph’s an incredible surfer and I’m sure she’s going to come back to Bells hungry and fired up so I’ll just enjoy it, relish in it for a minute but I’ll have to get back to work soon. Yellow is my favorite color so I’m stoked to have the yellow jersey back.”

“It’s an amazing time for women’s surfing and it’s such an honor to be a part of that,” continued Moore. “This year is going to be insane and the girls are on fire. It’s special to watch the other girls surf and have them push you but at the same time be happy for them because as a sport you’re changing it. You’re going to leave it better for the next generation so I think we’re all really proud of that.”

“I love Snapper and it’s so cool to see the girls do really well out here,” Gilmore said. “It was a tough one but Carissa was unreal and I made a priority mistake so I was on the wrong side of the rhythm.”

“It was nice that the WSL decided to really show their commitment to getting surfers in great waves and extend the waiting period and here we are competing in the best waves we’ve seen during the whole event,” Gilmore continued. “It’s super contestable and everyone has been surfing so well. Then in the Final Carissa absolutely smashed me. I love watching her surf and she’s a real asset to women’s surfing. She makes me rise and surf better and she definitely put on a clinic out there and she’ll take that confidence into the next event. I’m happy with a second place. It’s definitely not the worst and it’s not the best, but I’ll take it and it’ll definitely be a keeper in my end of year results.”

A big clash between two long-time rivals Moore and Tyler Wright (AUS) saw the young Australian leave the event in third place. The pair have previously matched up 10 times in CT history, with Moore taking eight wins to Wright’s two. The two-time World Champion continued her winning streak today, beating the 2014 CT runner-up by 16.86 to 16.06 despite a strong showing from Wright, who previously defeated Courtney Conlogue (USA) in the Quarterfinals.

“Supporting the other women inspires me,” said Wright. “When you see the girls doing well it’s not something to worry about. It’s progressive and something that it inspires a whole new generation, including me. It’s truly incredible to be part of it and watch. I love progress and I love the girls surfing amazing so it’s hard to be worried about it.”

Highlights from the Quiksilver and Roxy Pro Gold Coast are available at WorldSurfLeague.com. 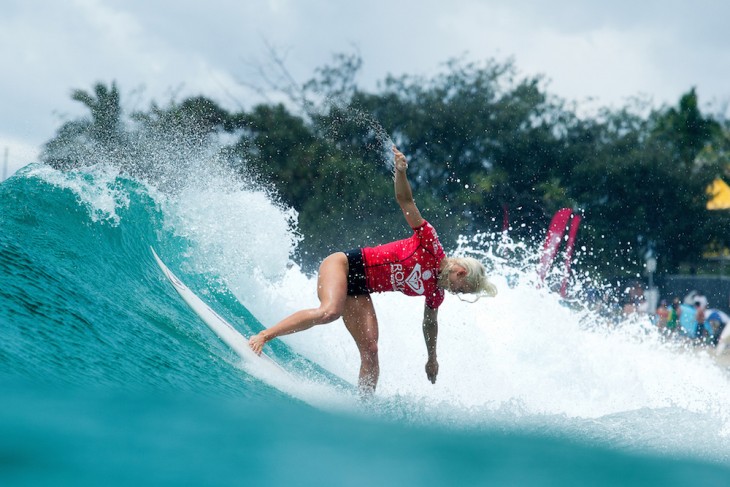 Tatiana Weston-Webb put on a good show on her rookie year getting through to the semis  at the Roxy Pro. Photo WSL/Kelly Cestari