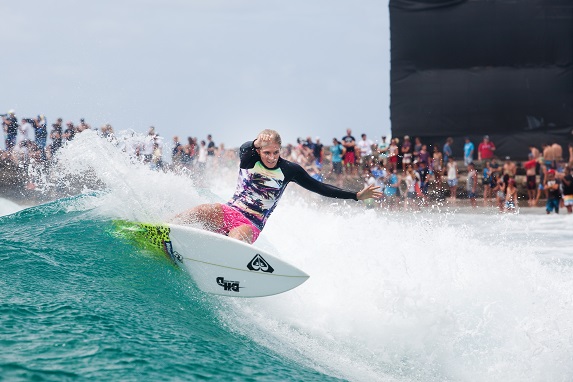 “This is the first offseason that I can remember where I just stayed home and decompressed,” Gilmore said. “It was great to be in one place and collect myself after a really intense 2014. We’ve had great waves over the past few weeks and it’s been productive to hone in on my fitness, equipment and approach heading into the start of the 2015 season.”

The Roxy Pro Gold Coast, where Gilmore was victorious last season en route to clinching her 6th world surfing crown, boasts the added importance of 50% of the winners over the past decade going on to claim that year’s world title.

“The performance level of the girls last year was like nothing I’ve ever seen before,” Gilmore said. “Every heat is potentially make-or-break for the season and anyone on tour can beat anyone else in any conditions. It’s incredibly exciting and a great time for women’s surfing.”

Gilmore faces a returned-to-form Silvana Lima (BRA) and the winner of the Trials in the opening round of competition.

Tyler Wright (AUS), Carissa Moore (HAW) and Sally Fitzgibbons (AUS) turned the 2014 women’s title race into the most exciting and hard-fought in the sport’s history and they’ll WSL Top 17 this season to challenge Gilmore for the No. 1 spot.

Tatiana Weston-Webb (HAW) serves as the sole rookie for the 2015 class, but she’ll be joined by returning CT surfers in the form of Lima and Sage Erickson (USA) who are both back after one season on the Qualifying Series (QS).

The Top 17 will be joined by the winner of the Trials for the 18-woman competitive field of the Roxy Pro Gold Coast.

The Roxy Pro Gold Coast will be webcast LIVE at WorldSurfLeague.com