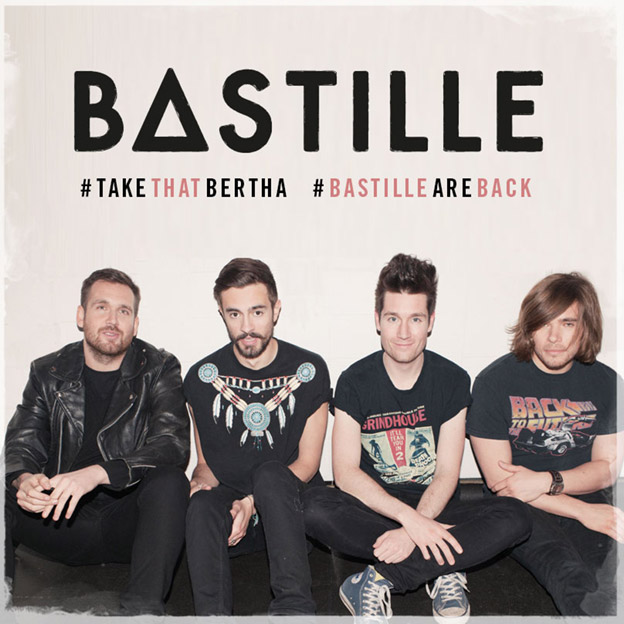 Since last summer, Boardmasters’ family of fans have been crying out for this bands return and Cornwall’s own surf and music festival listened. Back by popular demand, BRIT Award winners, Bastille will be making an epic return to Boardmasters 2015. After missing out on their headline performance last year because of the effects of ex-hurricane Bertha, festival favourites Bastille plan on taking care of unfinished business, playing an unforgettable headline performance as the sun sets over arguably the most beautiful festival setting of the summer.

Boardmasters 2015 will take place along the stunning Cornish coastline from Wednesday 5 August to Sunday 9 August. To book tickets visit the website here.

Bastille, who’s highly acclaimed debut album ‘Bad Blood’ made them one the biggest selling British debut acts, is the second act confirmed to headline Boardmasters 2015. They join fellow BRIT Award winners, Rudimental who are also announced to headline the festival. The third and final headline act will be announced soon and will surely cement Boardmasters with one of its best line-ups to date!

Bastille’s front man, Dan Smith said this about the band’s upcoming return to the Boardmasters stage: “We’re all incredibly excited to be coming back to Boardmasters for, barring anymore hurricanes, an amazing night in the west country. Growing up in the southwest, Boardmasters was a festival I always wanted to play so when it was cancelled last year I was devastated. Hopefully coming back this year will help make up for it and we’ll be able to play some material from our new album as well.   We can’t wait to see you all in August.“

Known for bringing the hottest music and surfing talent to Cornwall, Boardmasters hosts five days of thrilling surf competition at Fistral Beach and a weekend of explosive live music on the stunning headland, Watergate Bay.  Details of the International Surf Competition and more additions to the 2015 music line-up will be announced soon!

Festivalgoers wishing to secure their tickets for Boardmasters 2015 can get their hands on Tier 2 tickets for a limited time. Boardmasters operates a tiered ticket system with price bands for tickets changing over time. The sooner you buy, the cheaper it is! Book tickets via the website.

New for 2015, Boardmasters camping at Watergate Bay has been extended, opening a day early, from Wednesday 5 August. This means festivalgoers won’t have to miss a single day of the event including all the surfing action at Fistral Beach during the days before the music site at Watergate Bay opens over the weekend. A bumper ticket package – the ‘Charger’ ticket is also on sale and includes everything from bus pass to parking, VIP camping, Beach Session gigs, After Parties and a Boardmasters t-shirt and tote bag!  For more information visit the website here.

Tickets for Boardmasters are on sale NOW

Boardmasters operates a tiered ticket system with price bands for tickets changing over time. The sooner you buy, the cheaper it is!